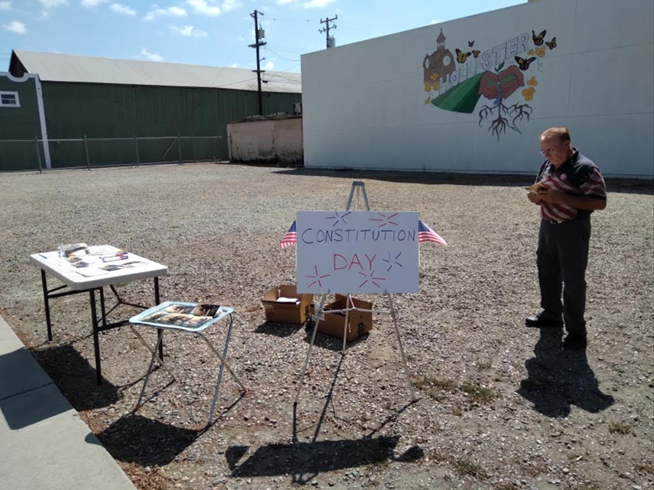 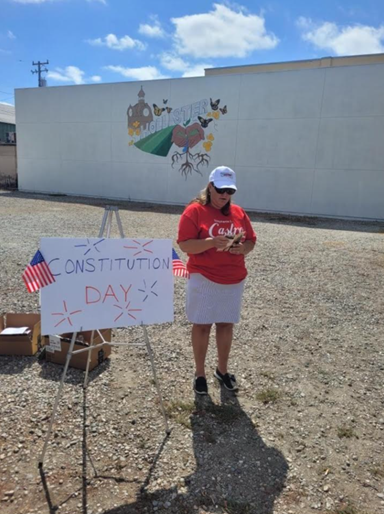 This commentary was contributed by Ed Huston. The opinions expressed do not necessarily represent BenitoLink or other affiliated contributors. BenitoLink invites all community members to share their ideas and opinions. By registering as a BenitoLink user in the top right corner of our home page and agreeing to follow our Terms of Use, you can write counter opinions or share your insights on current issues.

For this Constitution Day celebration, the group also passed out pocket Constitutions to passersby and offered activities for young children, such as coloring and cutting out a small American flag, which was then taped to a small stick on which the child could proudly display their flag.  The Constitution was read this year by members of the local San Benito County Republican members: Assembly candidate Steph Castro, Tony Avilla and Ed Huston. If you haven’t reviewed the Constitution in a while, the First Article defines how the Congress will be elected and operate, the Second Article specifies how the office of President will be filled and function, and the Third Article identifies the selection and powers of our court system.

The writers of our Constitution were learned men who had diligently studied a multitude of forms of government, both the failed and the successful, prior to constructing the structure and limitations of the American government through seven brief Articles.  They were intent on not repeating the mistakes of other failed systems.  They had just, 11 years earlier, thrown off the shackles of King George III, and wanted to ensure that they would never again be ruled by a king.  In fact, many of the restrictions found in the Articles and the Bill of Rights are a direct response to the grievances addressed to the British Crown in the earlier Declaration of Independence.  The average duration of constitutions throughout history is 17 years. At 235 years, the American Constitution is the longest operating constitution in the world.  There is something truly special about our Constitution and form of government.

The fact that all of our rights are secured and our government’s powers constrained by the Constitution makes it important for all of us to read and understand it. And yet, as a recent poll showed, 50% of Americans could not name one of the freedoms guaranteed by the First Amendment (the first of the Bill of Rights) and 95% could not name two of them.  By the way, there are five listed in that amendment; how many can you name?

If you missed this Constitution Day event and would like a pocket Constitution to read and study with your family don’t miss next year’s commemoration of the 236th anniversary of this amazing document on the 2023 Constitution Day.