Join the free kickoff party to get out the vote in support of the Measure P "Repair Our Roads" Campaign with live music, Saturday May 7, upstairs at The Vault 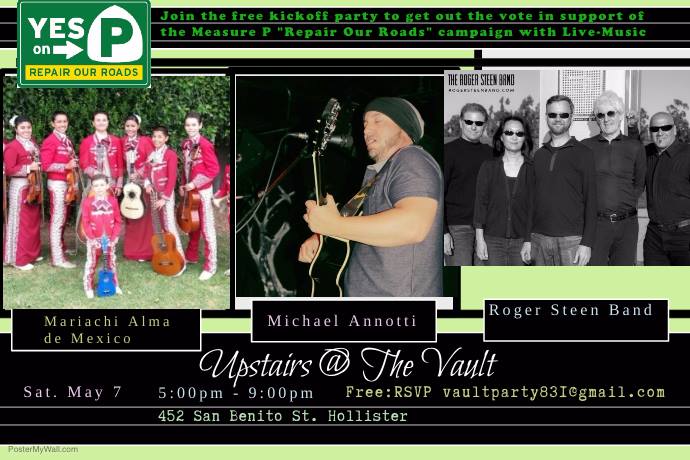 The Yes on P – Repair Our Roads campaign is offering a free kickoff party this Saturday, May 7 from 5- 9 p.m. upstairs at The Vault, 452 San Benito St. in Hollister. The evening will feature three bands/musicians performing a wide variety of live music. The event also perfectly complements the Hollister Downtown Association Wine Stroll which ends at 5 p.m. in downtown Hollister. Those celebrating the annual Wine Stroll can head on over to The Vault to relax or continue the party while experiencing free live music.

The Yes on P – Repair Our Roads campaign will be handing out free lawn signs, answering questions and encouraging attendees to vote in favor of the proposed half-cent sales tax dedicated to repairin local roads in San Benito County.

Michael Annotti, a native son of Hollister, performs at 6 p.m. Annotti i  a winner of the 2013 Los Angeles Music Award Album of the Year recognizing him for his self titled release: "Michael Annotti Ep," as well as a winner of the 2008 Star Music Awards best roots artist for his song "Brother Sun." During the summer of 2013, his single release "time keeps tickin"  climbed the national radio charts to #62 and reached #4 on the national indie charts for nine consecutive weeks.

The Roger Steen Band will headline the event at 7p.m. Roger is best known as lead guitarist for The Tubes who are still actively performing all over the world. The band features Roger Steen on guitar and vocals; Hank Gibson on bass, vocals; Bill Walker on keys, vocals; Paul Bevilacqua on drums; and Janice Kang on vocals and percussion. The band released an album of original music on CD in 2013 which is also available for download on iTunes and CD Baby. They perform an eclectic variety of classic rock covers of Elvis Costello, Bonnie Raitt, Steely Dan, B 52's, Rolling Stones, Squeeze, Beatles and of course The Tubes, as well as a few of their original songs. A video of the Roger Steen Band performing at the 2015 Hollister Independence Motorcycle Rally is linked below.

The event is free but seating is limited and managed by RSVP e-mail invitation. To get your invitation to this free concert/party, e-mail: [email protected]. A no-host bar will be available upstairs at The Vault.