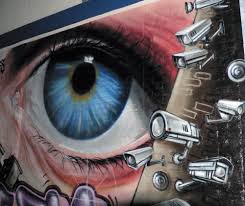 Beginning in May, the Farmer’s Market will offer for sale fresh, organic produce and healthy foods for the whole family. More than just purchasing locally grown items, the events downtown offer an opportunity, after a winter’s hibernation, for Hollister to come out, gather together with family and friends, eat fresh produce and foods, catch up and share chitchat – both personal and otherwise. However, barely noticed by many who will take part in these "family-friendly" gatherings is the creepy and unprincipled covert violation of their privacy and civil liberties, by Hollister’s surveillance/spy camera program.

In 2014 the Hollister City Council approved the expenditure of more than $400,000 for the purchase and installation of a surveillance/spy camera system ($30,000 a year for SGI, Inc. license fee and maintenance totals $300,000 when stretched over 10 years – taken together it comes close to a $1 million political boondoggle). It was approved without formal hearings and sold to the public – after the fact – that the spy cameras were to address any and all possible crime activity during the city’s newly approved annual “family-friendly” Biker Rally. This event in particular, drives many local residents to either stay away from downtown or abandon the city all together.

Ever since its implementation, the surveillance/spy program has been continuously videotaping everyone and anyone who innocently and without committing any crime, ventured in and around Hollister (no official signage of the cameras for deterrence purposes are posted). The secret recording of people without their knowledge is a clear invasion of privacy – good luck in attracting tourism to the city with this type of openness and transparency.

As a result, I have not and will not patronize downtown nor spend my money at its businesses. The spy cameras serve as a major dis-incentive are personally offensive, intrusive and constitutionally problematic. Additional reasons for my boycott are simple and straightforward. The installation of a police state surveillance/spy camera system, when such a system is unwarranted, provides an irresponsible, false sense of security to residents by leading them to believe and think they are secure and safe as a result, is another; wasteful spending when more pressing concerns are unfunded, de-funded and overlooked, is still another.

How would you feel if your image (face), your voice (sound) and your personal biometric fingerprints (eyes and facial features) were captured and recorded while at the downtown event?  All this as you talked with your neighbors, caught-up on private personal family matters, made your purchase or while having a private conversation on your cell phone, as you strolled down San Benito Street. All the while and unbeknownst to you, police are viewing, documenting, recording and tracking your personal information – while committing zero crime, nada what soever.

This innocent looking "family-friendly" event has been unfortunately transformed into a law enforcement and intelligence agency instrument to categorize its residents and visitors. My participation therefore, would in effect be construed as consenting to and accepting the unwarranted personal intrusion – a major violation of my personal sense of privacy. When one takes into account that Hollister’s Surveillance/Spy Program was approved without public input and funded out of our general fund (tax dollars) – to an out-of-county business (SGI, Inc.) under the guise of a local economic development project – the city council decision and police actions are doubly offensive and a further breach of the public trust.

Of equal concern is that personal information – which belongs to you and me – will be shared with the state, other law enforcement and federal intelligence agencies, including the DEA, DOJ, FBI, NSA, Homeland Security, etc., all with “stellar” track records for violating our privacy. The probability that the information “can and will be used against you” is very likely, since neither our city “leaders” nor the police department have seen the need to issue policy, rules or regulations governing its use – a violation of good governance, police transparency and trust.

So enjoy, if you can, the upcoming Hollister street events, after learning that your image, voice and biometric fingerprint information is surreptitiously collected, without your consent. Moreover, rest in the knowledge your information will be data-banked, shared and become common knowledge to a slew of individuals in law enforcement and federal intelligence agencies you don’t know anything about, but they know A WHOLE LOT about you – just because!