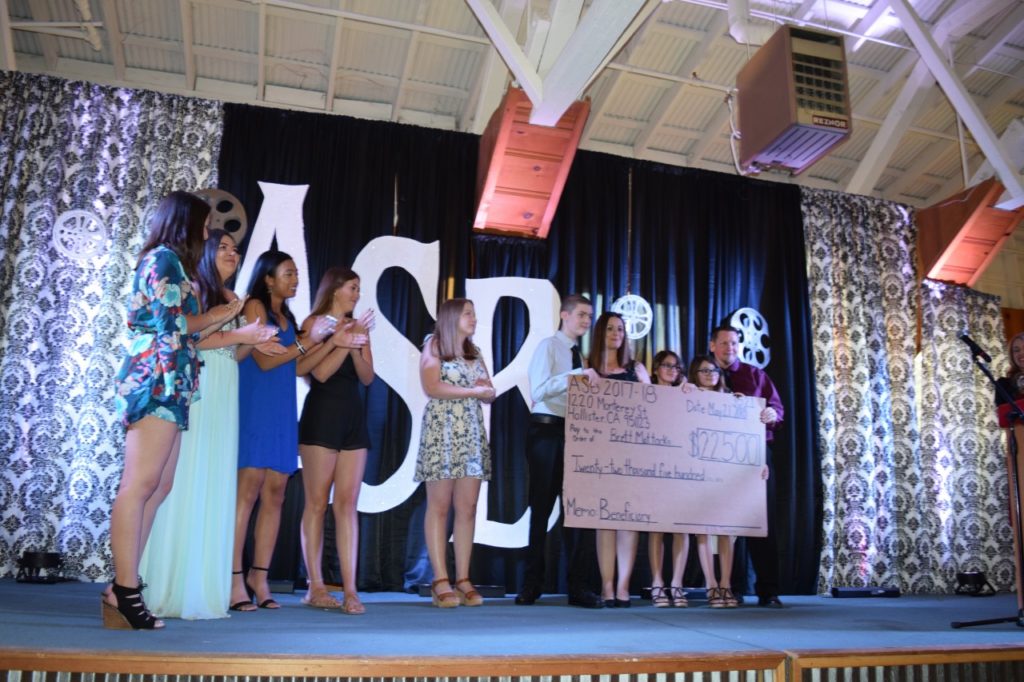 The community, led by the San Benito High School Associated Student Body, raised more than $23,000 to help offset the medical costs for local 13-year-old Brett Mattocks, who had a brain tumor. More donations came in after the initial presentation of the check at the ASB Banquet. Photos courtesy of Catalina Lemos. San Benito High School’s Benefit Drive, an annual effort through which the Associated Student Body (ASB) works with the community to help an individual in need, raised $23,200 this past academic year to help offset the medical costs for Brett Mattocks, a 13-year-old Hollister boy who had a brain tumor removed in the summer of 2017.

Mattocks underwent chemotherapy and radiation throughout the school year and recently was given the news that he is in remission, according to SBHS Activities Director Catalina Lemos, who coordinated the drive from November 2017 through May 2018.

The fundraising effort surpassed its $22,000 goal.

ASB students went door-to-door in many Hollister neighborhoods throughout the year, spending three hours on some Saturdays asking for donations. The student organization also held “$2 Tuesdays” during which SBHS staff and students were encouraged to donate whatever they could to the cause and they organized a “Miracle Minute” at a school rally, in which students donated as much as they could in 60 seconds as part of a class competition.

During home athletic games throughout the year, ASB students collected donations from home and visiting fans.

Various San Benito County restaurants, including Running Rooster and Panda Express in Hollister and Doña Esther's in San Juan Bautista, designated certain evenings in which a portion of that night’s sales would be donated to the cause. ASB also coordinated a spaghetti feed that raised $5,700 with help from the Hollister Veterans of Foreign Wars, which provided a location and some supplies in addition to preparing the food.

“They worked diligently to raise as much as possible for our Beneficiary,” Lemos said. “All ASB officers participated and helped in raising funds for Brett and his family.”

The effort was truly a community one, Lemos, a Baler alumna, noted, saying that she wanted “to thank everyone in Hollister and beyond that donated, sent positive thoughts and/or helped spread the word about our beneficiary. My students grew so much from this experience. It is so important to learn to serve in order to be a great leader — and these students are great leaders. I am thankful to be from such a wonderful place, where we still take care of one another.”

Mattocks and his family were presented with the check at the ASB Banquet on May 21.