Community members are encouraged to request a survey about local needs 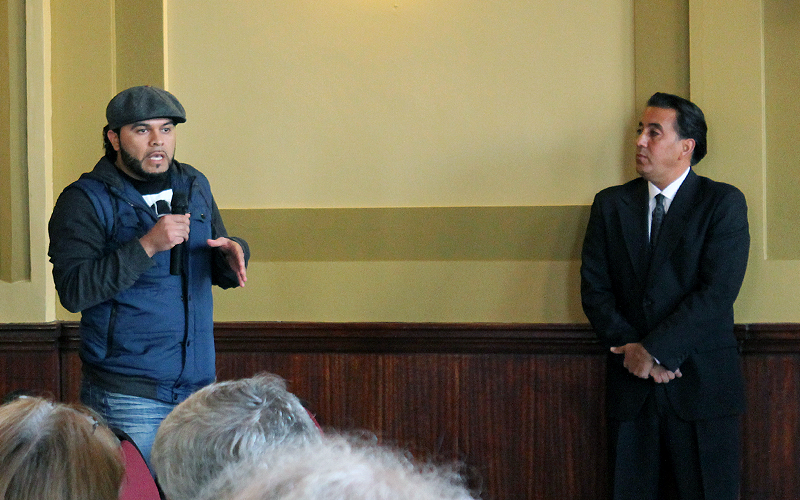 Hollister Youth Alliance Case Manager David Gutierrez advocates for local kids during a town hall meeting April 23, while Mayor Ignacio Velazquez and others of the community consider his concerns.
×

In a show of community Thursday night in downtown Hollister, the twinkles of timeless lullabies echoed among an audience of all ages.

San Benito County Health and Human Services Agency Deputy Director Enrique Arreola teamed with Supervisor Jaime De La Cruz, Hollister Mayor Ignacio Velazquez and Hollister Elementary School Board Trustee Peter Hernandez, who ensured that everyone who showed up had opportunities to comment on funding priorities of the Community Action Board.

"With this feedback, we can create a plan," said Arreola. "The workforce is means to stability."

The Community Action Board provides public services such as employment resources, shelter and housing support, and programs for low-income individuals and families. San Benito County Community Services and Workforce Development Staff Services Specialist Andi Anderson, who recorded minutes of the meeting Thursday night, encourages community members to email her at [email protected] to request a copy of a community needs survey that the county apparently needs back by May 31. The agency Friday on a call with BenitoLink could not confirm current availability of the survey.

"Funding for programs ensuring that they can make good decisions would be good," said Guiterrez.

A community member who identified himself as Juan brought to light his family's efforts to simply stay together. Juan, who said that he previously associated with drugs and gang-affiliated activity, has made significant progress for himself and family.

Despite employment, he said his family of four remains exposed to risks as a result of direly low income.

County and city officials paid attention to what Juan and several others had to say during the entire meeting, which spanned about two hours.

"The home-building that you see that is happening right now was approved years ago," said Hollister Mayor Ignacio Velazquez. "What happened then in the City of Hollister and County of San Benito was a building moratorium: The old sewage plant did not have sufficient capacity; and there was no building for several years. Then, depression hit here. That's what it was — depression — not only recession. There basically was no building for about 10 years."

"The old ways of making deals with friends — those are gone," vowed the mayor. "The people have to hold their officials accountable."

Developers now pay heavy fees, according to local officials and homebuilders. In 2014, according to officials, developers in Hollister built fewer than 100 homes. This year, the city expects to gain between 100 and 150 homes.

A legal firm that works under contract with San Benito County recently motioned to stop representing Richard Scagliotti, a former county supervisor recently determined liable by a court for the use of his authority in favor of his own financial interest.

Scagliotti now plans to build hundreds of homes off Fairview Road in Hollister.

An additional quote by the mayor was added to this story April 25.