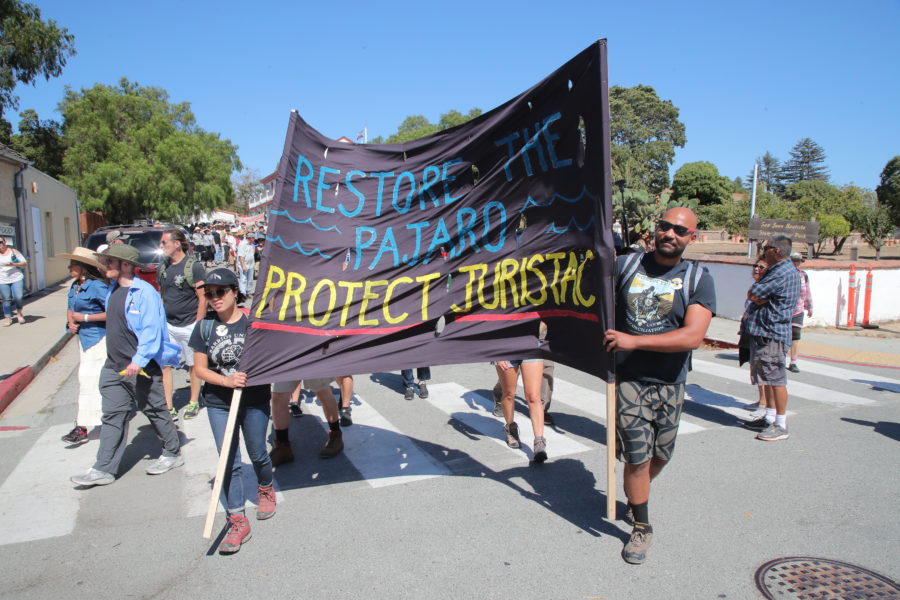 Participants listen to speakers in front of Mission San Juan Bautista before the walk began.

“Today's walk was historic,” Lopez said. “What you witnessed was our members coming together with the public."

Walkers gathered in a circle and listened as tribal elders addressed the group.
×

This article was contributed by photographer Robert Eliason.

“We must give reverence where reverence is due. We are on sacred land,” Amah Mutsun Tribal Chairman Valentin Lopez said to over 300 community members gathered to participate in the Walk For Juristac on Sept. 8. Juristac is the Mutsun name for an area off Highway 101 just outside San Benito County known as Sargent Ranch, where developers have proposed a 320-acre open pit sand and gravel mine.

The walk, which spanned five miles from Mission San Juan Bautista to Juristac, began with tribal elders leading the procession of marchers, accompanied by tribal drumming and singing. They walked out of town on Third Street and continued down San Juan Highway. Vans were provided for those unable to make the five-mile walk.

Juristac holds a sacred place for the Amah Mutsun people. For centuries before the Spanish built Mission San Juan Bautista, the hills were home to the tribe. The area itself is considered sacred to a powerful spirit named Kuksui. The Mutsun people still perform ceremonies and dances to Kuksui to this day.

“We will no longer tolerate capitalism on sacred land,” former Santa Clara County Supervisor Blanca Alvarado said at the walk. “We are on sacred land. You will hear political arguments that we need the sand and gravel. We need clean air and water.”

Juristac is home to thousands of plant and animal species including burrowing owls, golden eagles, bobcats, pond turtles, bats, and native bees. Speakers at the event said development at Juristac would be an ecological disaster for the area.

“Juristac provides a critical landscape linkage for wildlife that need to migrate in and out of the Santa Cruz Mountains,” said Alice Kaufman, legislative advocacy director for San Mateo and Santa Clara counties with the Committee for Green Foothills. “The proposal would result in four open pit mines hundreds of feet deep, would operate for 30 years, and pump out about 76,000 gallons of groundwater a day.”

“These species are symbols of California’s wilderness. If we don’t fight to protect what little of their habitat remains we could lose them forever,” Yap said.

Organizers set up rest and water stations for water along the walk. Vans followed the procession to pick up anyone who grew too tired from walking. Marchers were delayed a little as they crossed a dirt road to get to the frontage road off northbound Highway 101. The march ended at an area just north of Betabel RV Park after crossing the freeway overpass between Y and Betabel roads. At the end of the walk, participants were in a small valley tucked into the hills in the Juristac area.

Gathered in a circle, tribal elders addressed the group.

“Today’s walk was historic,” Lopez said. “What you witnessed was our members coming together with the public. When have the people in this area stood and walked with the indigenous people of this area?”