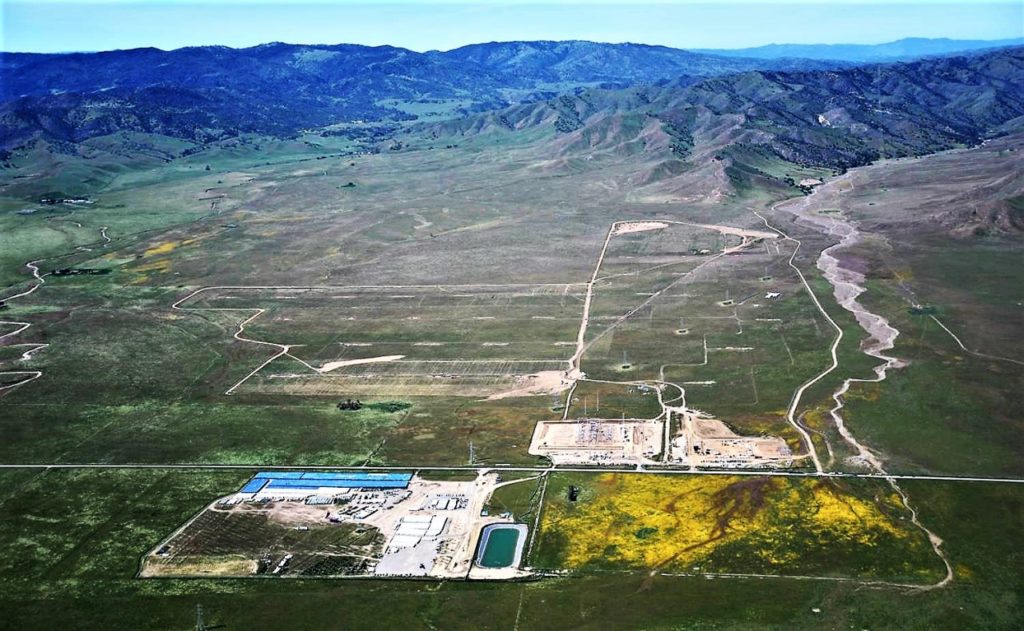 Along the way, Charlotte, N.C.-based Duke Renewable Energies entered into a joint venture with PV2 only to pull out of the deal Aug. 2014, while remaining a minor investor as ConEdison moved forward in managing the construction of the project while RET Capital provided financing and asset management. However, by April 2016, there was little sign of construction on the 4,885-acre site off Little Panoche Road as it was stymied again by environmental groups concerned about the endangered kangaroo rats in the area.

According to Cherniss, initial construction finally began in March 2016. He said that work continues on a number of site elements, including a laydown yard, substation and switch yard to tie into PG&E infrastructure, even as kangaroo rats continue to be taken and relocated.

Supervisor Jerry Muenzer interrupted the project update to ask if the rumor that the project was being downsized were true. Cherniss hedged on his response and said the state had made certain requests that were now being studied by state courts. But when Muenzer pushed back, Cherniss told him the governor’s office wanted to reduce the size of the project. However, ConEdison was continuing to move forward.

“We have all of our permits for the project signed and we are building 100 percent of the Panoche Valley Solar project at this time,” Cherniss maintained.

Supervisor Jaime De La Cruz wondered if the county was receiving money related to the amount of equipment located at the construction site. Cherniss said the county was receiving funds through a “pilot in-lieu of a property tax,” as well as sales tax. Cherniss wasn’t sure of the rate, and said whatever the current rate is was determined how much was being paid. De La Cruz joked that perhaps it should be 8.5 percent, and then commented that as of January, the state sales tax rate had decreased to 7.25 percent.

“Is ConEd willing to commit to that 7.5 percent?” De La Cruz asked.

Cherniss said he would address the issue of sales tax later in the presentation and continued with the progress report, showing the board drone photos of the site as he described the activity there. He told them that one issue that came up during construction was a bridge on Little Panoche Road located in Fresno County that was not able to hold the heavy truckloads headed to the site. He said ConEdison worked with Fresno and San Benito counties to shore up the bridge with a jumper bridge that sits on top of the existing structure. He said construction began Feb. 19 and was completed Feb. 26 during what he described as “one of the largest rainstorms in San Benito County history.”

He went on to say that there were two delays during construction: one being the bridge and the other from the amount of rain that increased not only the amount of grass growing in the area, but also the numbers of protected kangaroo rats. He said there were far more rats captured than the company was permitted to take and that State Fish & Wildlife directed the company to reduce its take limit while the agency reevaluated the protected status of the rats. He said it’s expected the take amount will be increased, which would also increase construction activity.

Regarding the development agreement with the county, Cherniss said ConEdison had invested more than $54 million for physical equipment delivered to the site, as of Dec. 31, 2016. De La Cruz asked how much electricity would actually be delivered. Cherniss said by the end of July, there should be enough solar equipment to produce 126 megawatts, which represents half of what is ultimately planned for. He noted that the schedule of delivery for other equipment on site  was not available, but said there are enough materials at the site to keep workers busy for the remainder of the year.

“We approved certain materials and we’re just looking at when they get delivered,” Cherniss said. “When they’re delivered to the site, the pilot payment becomes due and that’s when sales tax will be recorded to the state.”

De La Cruz asked him if he could account for how many local jobs had been created and how many local businesses would benefit from the project. Cherniss said he had made the request to obtain the information, but did not yet have it to give to the board. He did say, though, that he had received confirmation that every job in the field had been made available to locals. The work that has been done in the substation, however, involved people with an advanced degree of experience in high-voltage engineering construction, so he couldn’t say how many local workers were offered those. But he did say that because of the specialty experience, those employees most likely came from wherever they could be found throughout the state.

De La Cruz wondered if the agreement spelled out that ConEdison would meet with local unions in order to inform them what specialties would be needed. Cherniss said he believed that had been done, but because so few substations are built each year there are not a lot of available technicians qualified to work on them.

“They tend to move from site to site,” Cherniss said. “This is a 230-kilovolt system, so there’s not a lot of people with those types of expertise who don’t already work for PG&E.”

He continued with his financial briefing by telling the board that the company has so far paid $7.9 million in sales tax and that amount will continue to increase. Again, De La Cruz asked him if ConEd is committed to paying 7.5 percent sales tax, and again Cherniss said the company will pay whatever California sales tax percentage is presently in place and it doesn’t have a plan to pay a higher amount. De La Cruz commented that when the contract was signed, the county was anticipating a 7.5 percent tax and did not think the governor would lower it. Cherniss reiterated that the company would pay whatever the current rate was, but he did say the $7.9 million would have been based on the higher rate because it came from 2016 sales.

Supervisor Anthony Botelho told Cherniss he was not blaming him for the decrease in sales tax because “a deal is a deal.”

“Everything that happens in Sacramento beats up on cities and counties,” he said. “What I’m interested in is the exemption of the $54 million in equipment that’s sitting there that should be unsecured property taxes, and of course the cost would be passed on to the consumers. It’s my understanding the $54 million is exempt.”

Cherniss concurred that the state has exempted renewable generating facilities from paying property taxes. He said in exchange for the exemption, ConEdison worked out with the county the development agreement’s pilot payment in lieu of the tax in the form of a percentage of the tax that would go to the county’s General Fund on an annualized basis. He said the company is going through an audit with the county of the $54 million to determine the payment.

Supervisor Mark Medina wondered if there might be a mechanism that would show monthly revenue. Ray Espinosa, county administrative officer, said the county will not receive any property tax revenue because of the exemption. He also said the county will hire a company to track the monies for the county and make sure the payments are made. He said the process is just beginning because the equipment was brought to the construction site in the past six months. He offered to come back at the next board meeting to deliver more specific information and said that he did not know if any money was deposited into the General Fund. Cherniss said he knew none had been delivered because the amount was still being assessed. He said, however, that sales taxes had been paid to the state and anticipated a portion would eventually find its way to the county.

Medina commented that the only benefit for the county that he was aware of was the hiring of two firefighters who were stationed in Panoche Valley. Cherniss said there was also a sheriff’s deputy. Espinosa added that the county needed to extend the agreements with both fire and sheriff. Cherniss said that per the development agreement there would be fire and sheriff personnel on site until the project was completed.

Cherniss concluded by reminding the board that there is an additional $140,000 that will go to the county in 2017, of which approximately $65,000 came through the development agreement. He said $50,000 was set aside that was increased by $15,000 that the supervisors could use for a betterment project.

During public comments, Hollister resident Marty Richman said that after losing several legal moves against the project, “…the rat people went to the governor to cut the project in half.” Then he challenged, “If you guys take that sitting down you’re idiots because it affects every project in this county.”

The more Richman spoke, the angrier he seemed to get: “Do not kid yourself. It has nothing to do with Panoche Valley. The environmentalist have made it clear that they want all of the solar projects out of this county. They care more about rats than they care about the people. The people can starve, lay down and die and the environmentalists would step over them. There are environmentalists and there are idiotic radicals.”

He said the legislature and the governor should be ashamed.

“The governor, who is about to put 15 cents tax on a gallon of gasoline, is not doing anyone a favor by cutting solar projects in half,” he said. “I want more energy independence and I don’t want to have to go to Saudi Arabia or have my granddaughter who is in the Army killed in the Middle East to get a barrel of oil because some idiot environmentalist cares more about a kangaroo rat than a person.”

Richman’s anger seemed to fire up Botelho, who not only agreed with his sentiment, but added, “This project needs to be built out all the way. If I was in a meeting with the governor, I would say we need more land. Marty’s comments might have been a little animated, but they needed to be said. This governor is on the verge of being senile and I’m happy his time is almost up.”