Roundabouts are coming to Hollister. 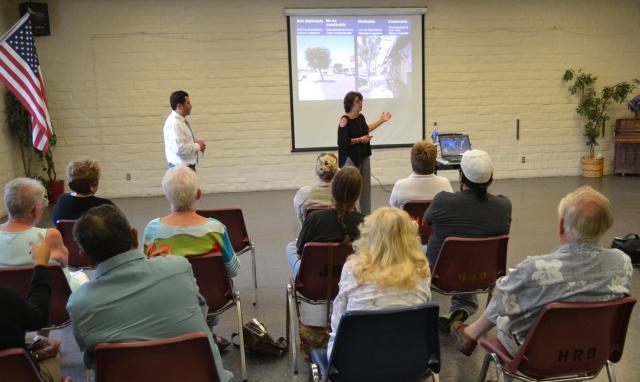 Hollister City District 2 Councilmember Mickie Solorio Luna hosted an open house on July 30 at the Hollister Recreation Center to bring residents up to date on planned changes for West Hollister.

A small, enthusiastic crowd participated in an open discussion about the San Juan Road Streetscape Beautification Plan and developments for West Hollister, as well as a name change to San Juan Road, safe routes to Calaveras and R.O. Hardin schools, and a river trail.

Luna was elected councilmember Dec. 9, 2014, after working for the city for 30 years. She campaigned on residents’ concerns about neighborhood security, sidewalk safety and parks.

She kicked off the presentation by announcing the open house was the first of a series of meetings to keep the community informed about the plans for West Hollister.

“I hope you take it home and pass it on to other people,” she said of the presentation by the planning department. “It’s very important that this community realize the importance of the west side gateway of the City of Hollister.”

She explained that when many people drive into Hollister they think the gateway is on San Felipe Road going past the airport.

“Well, it isn’t,” she said. “A long time ago, everyone traveled along Fourth Street and out to Salinas and they had to go through the city. I’m glad that I was born and raised in Hollister. I’ve seen it grow and a lot of the issues that have come forward.”

Luna said that while she is grateful for improvements made over the years, she has a vision for West Hollister.

“I hope you will see exactly what we’re talking about because it can come true,” she said. “Seeing the improvements that can come forth in the next few years is important for every resident.”

“One of the biggest projects for West Hollister is called the West Gateway Streetscape Beautification Plan,” Paxton said. “We’re going to take a lot of time to explain how it will change that entrance to Hollister.”

She explained the plan came about after a workshop in 2007 to implement the new general plan.

“Some of the people in this room said to us ‘your vision for West Hollister won’t work until you slow down the traffic,” she said. “I’d like to thank those people for their comments and that’s part of the reason we have this plan that we’re presenting to you tonight.”

Paxton explained that the city hired a consultant to prepare a “complete street plan” for three roads.

“This plan will make the west entrance more inviting,” she said. “A ‘complete street’ is a street that is safe, comfortable and convenient for travel, whether you’re using public transit, or in a car, on a bike or walking. Every mode of transportation has its place.”

The presentation consisted of a number of slides demonstrating various design concepts to show those attending the open house how San Juan Road/4th Street would be changed for both beautification potential and ease of access. According to the plan, the principles of safe streets include designs that make drivers feel comfortable driving at slower speeds. She said today the street is designed for cars and not pedestrians.

“The speed limits would not be the 45 miles per hour now found on San Juan Road,” she said. “It would be more desirable to be 25 or 35 miles per hour. When San Juan Road was built it was Highway 156, designed to move trucks, cars and interstate traffic. It wasn’t built for pedestrians or neighborhood uses that are there now.”

In addition to widening San Juan Road, the streetscape plan includes 22 pedestrian lights, a median with landscaping in the center of the road to narrow available lane space for cars, slowing them down. There will also be on-street parking and trees.

She said there are also design plans for curb extensions.

“Most corners have curves and we would extend those out, which will shorten the distance for pedestrians to cross the street,” she said, “and gives them more visibility. And cars can park between those extensions. They will also help reduce the speed of traffic by narrowing the travel lanes. The call those ‘traffic-calming devices.’”

She said that the ‘complete streets’ concept is essentially initiating a ‘road diet.’

“The right-of-way of San Juan Road is 84 feet because it was built as a highway,” she said. “We’re going to take advantage of that right-of-way to put it on a road diet by putting in a landscaped mediun that eliminates cross traffic and defines intersections, which will make it safer to cross.”

Paxton explained the addition of a roundabout to help avoid conflicts at four-way intersections.

“Roundabouts have been proven to be safer,” she said. “At a four-way intersection there are 32 vehicle opportunities for a collision. Also, a roundabout forces everybody to slow down.”

The possibility of roundabouts in Hollister generated the most conversation during the presentation. Many of the questions asked demonstrated that some of those present had never encountered a roundabout before and were unclear how to navigate through them. There was also concern how big-rig trucks would maneuver through them along with cars and pedestrians.

After various traffic scenario questions regarding roundabouts where addressed, one person asked if traffic would be slowed down immediately at the bridge over the river before coming into town.

“On the city council addendum for Monday night is a contract from traffic engineers in roundabout design to do a peer review of that design to make sure that it is safe,” Paxton said.

Paxton outlined the future three phases that need to be taken to carry out the streetscape plan.

Phase One will include the median and roundabout from the bridge to Graf Road. At this time, there are no funds for landscaping.

Phase Two involves a grant request for $911,844 to be used to infill sidewalks, median, build curb extensions at existing intersections, bike paths, and some landscaping and pedestrian lights.

Also part of the plan for the gateway is to designate the entire street as 4th street. Paxton explained that those who live along the street—which is simultaneously called San Juan Road, San Juan Highway, San Juan-Hollister Road, and 4th Street—would keep the same street numbers, but would have to change their address information to 4th Street.

“We’ll be taking the proposal to rename it to just Fourth Street to the city council Aug. 17,” she said.

She also said the city’s long-term General Plan calls for a river trail.

“San Benito County also has an ambitious plan for a river trail that goes from the San Juan Valley all the way to Bolado Park,” she said.

She ended the presentation by explaining that the San Benito Council of Governments had a grant to prepare Safe Routes to School Plans for Calaveras and R.O. Hardin schools, and then invited everyone to look over the various plans and proposals.