After explaining the county has raised nearly $3.6 million to build and operate homeless shelter, Hollister refuses to pay full $200k, the amount county figures is its fair share. 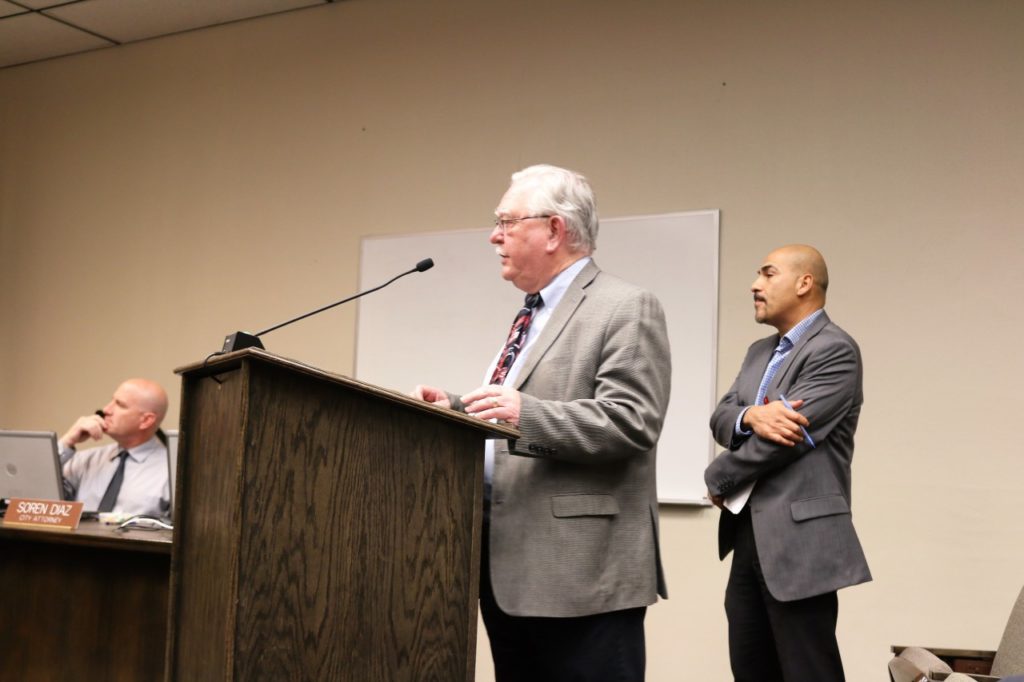 Jim Rydingsword and Enrique Arreola tried to make their case that the city should pay $200k, but the city wasn't buying it. Photos by John Chadwell. Despite the fact that San Benito County had cobbled together $3 million dollars to purchase a building and renovate it for the new H.O.M.E. shelter and another $400,000 or so to run it for a year, Hollister City Council blinked when it came time to pony up the $200,000 that the county felt was the city’s fair share. Instead of the hoped-for $200,000, the council maneuvered through three separate motions, and, in a curious mathematical manipulation, decided that $129,000 was the right amount.

Bill Avera, city manager, reminded the council that Jim Rydingsword, director of the county’s Health and Human Services Agency (HHSA), had requested the $200,000 annually to help implement training programs and provide shelter for up to 50 people per day. He said the city does not have any non-identified funds for the shelter.

“The assistance that we would be providing to the H.O.M.E. Resource Center is essentially General Fund money, but part of the motion tonight, moving forward, the council should be directing staff to seek any and all sources of funding because when we put money into some project, it means something else isn’t getting anything,” Avera said. “Staff is recommending that we do the $200,000 for this year and reevaluate for future years. I don’t want to commit this council or future councils to that sort of subsidy.”

According to city records, the city staff also met with HHSA staff about the potential of a reserve or voucher program for the city. The concept would be to give Hollister Police Department, or other applicable city staff, the ability to provide a voucher to someone in need. This could be a tool the city can use to mitigate some of the potential illegal activity in public/private areas. Hollister does not have grant funds or other special funds for this expenditure. Therefore, it is difficult for staff to recommend using General Fund dollars for an annual commitment.

In his written statement to the county, Rydingsword stated that there is no doubt that there is a homeless problem in the community.

“This is evident with the high number of homeless individuals roaming downtown on a daily basis and in other areas of the county,” he wrote. “Although there was a 19 percent decrease in the homeless population (according to the 2017 Homeless Census), we are far from solving the homeless problem.”

He went on to describe how the county has been working with the Homeless Service Providers and with Hollister for over three years and has received two Community Development Block Grants (CDBG), totaling $3 million for the acquisition and rehabilitation of the Homeless Opportunities Meals & Empowerment (HOME) Resource Center.

“Phase 1 included the construction of the year-round emergency homeless shelter and Phase II is for Whole Person Care services and training,” he wrote. “Phase III will include transitional shelter for a seamless holistic approach. There is a need for on-going diversified financial resources for the operations of the shelter.”

Since he was not at the previous council meeting when it was explained how the county determined the city’s share of supporting the shelter should be $200,000, Councilman Ray Friend asked where the figure came from and why was it so late coming in the process. Rydingsword explained, as he did before when Councilman Karson Klauer asked the same question, that after accepting bids from companies that specialize in managing such facilities, and after determining the county’s resources, he split the difference between the city and county.

Councilwoman Mickie Luna asked Rydingsword if the county had originally asked the city to pay $100,000. He said after examining his department’s budget he found it was $200,000 and recalled that was the figure he originally requested. He said he agreed with Avera that the county and city should work together moving forward to find additional sources of funding. Luna asked where the county’s money was coming from. Rydingsword said his department does not have access to the county’s General Fund and that HHSA has relied on measures dating back to 1991, called Program Realignment, which are local funds that are treated like General Funds. Luna said she was concerned that while the county may have grants at its disposal for funds, the city can only reach into its General Fund. Luna also wondered if San Juan Bautista is contributing anything to the shelter. Rydingsword said the county has not asked San Juan to participate.

When Rydingsword said the homeless problem is primarily in Hollister, Luna responded that when she visited Linda Lampe at My Father’s House there were several homeless people from San Juan Bautista. She wondered if HHSA had asked the San Juan Bautista city council to contribute funds. He said he had not. Mayor Ignacio Velazquez wanted to expand on the conversation, stating that when San Juan was approached they claimed there were no homeless people there.

“We said you need to look behind some more buildings because they’re in every community,” he said, adding that while there are definitely homeless people in San Juan, they come to Hollister because that’s where the food and services are.

“If we do it by population percentage and $200,000 is the shortfall, that makes a lot more sense,” he said. “What happens a lot of the time everybody looks to the city to help out. San Juan Bautista doesn’t have a big budget, but they’re a part of it. It doesn’t make sense and it isn’t fair to the people who live in District 3, and I can’t support the city taking on the full amount.”

Councilman Jim Gillio said if the city would have known six months ago that the county wanted $200,000 from the city it could have allocated some funds at the time. Enrique Arreola, deputy director of the Community Action Agency of HHSA, responded that there are 527 homeless people in the county and 70 to 80 percent of them live in Hollister. He said the total operational cost of the shelter is $650,000, of which the county has secured more than $400,000. This is in addition to the $3 million raised in grants.

“We’ve been taking this very seriously ever since the Intergovernmental committee wanted to address the homeless problem,” he said. “Our department has provided homeless services for over 30 years, we operate a number of other homeless programs. We’ve done a terrific job and with the issue of funding we’ve come to the city council for the last two years.”

When it came time to vote, Gillio made a motion that the city pay $100,000 for one year and reevaluate how to come up with more funding. His motion did not pass for a lack of votes. Then Councilman Ray Friend made a motion to stick with the original request of $200,000. His motion also failed. Then Klauer, who figured the city’s portion was exactly 64.5 percent, made a motion to fund the shelter for $129,000. The motion passed 3-2, with Klauer, Gillio and Friend voting for it.