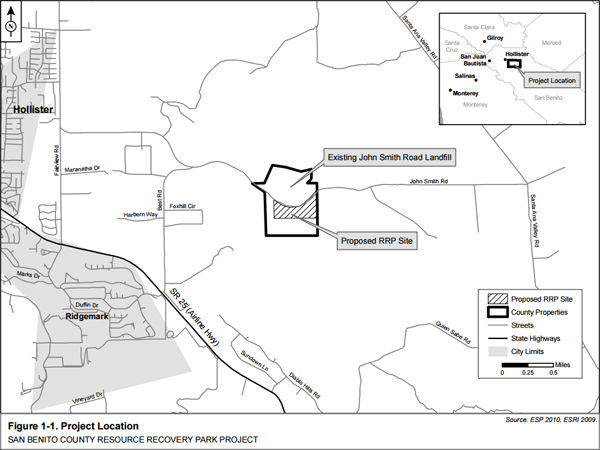 Though the plan aims to turn tons of trash into troves of treasure, such as revenue for the county's cash-strapped budget, news of further development surfaced Friday amid local opposition against the project, anticipated within the John Smith Road Landfill east of Hollister. Meanwhile, outside such tension among local residents and officials, Waste to Energy's chief executive sees room for improvements. As an operator of the county's proposed facility, according to Shipley, the renewables maker would produce environmentally friendlier materials and lower emissions, and create employment for locals.

"Our bid contained provisions to include a construction and demolition material recovery facility; which would provide the county with a method to recycle those building materials, as opposed to disposing them in the landfill or shipping refuse outside the county," said Shipley. "The objective of our part of the RRP (resource recovery park), as a function of the facility, is to lower air emissions, reduce valuable natural resources from being buried by producing beneficial and recycled materials, and to provide another business in the area that locally spends money and hires people."

County Management Analyst Sara Fontanos confirmed that the county is negotiating with the company.

"Currently, the resource recovery park project's ad-hoc committee is in negotiations with Waste to Energy LLC, which could result in a written agreement," said Fontanos. "Of course, any specified project would be subject to a project-level environmental impact report. The ad-hoc committee is aggressive with its fiduciary responsibility to the community, and wants to continue conversations and questions before putting something in writing."

A written agreement, according to Fontanos, could facilitate a partnership between public and private entities, allowing Waste to Energy to operate the resource recovery park on the county's property. She said that at the moment, Waste to Energy LLC's role is "a respondent to the request for proposal."

Waste to Energy reportedly made the only bid for the project.

Also, Fontanos noted that the park potentially could provide an opportunity for San Benito County to advance a greater good.

"The proposed combination of technologies used at the Resource Recovery Park could be trendsetting," she said. "The bottom line of this project is threefold — economic benefits, fulfilled mandates and better decision-making for the community, as well as the environment. It would increase local jobs, provide more sustainable futures for residents, generate revenue for the county, promote educational opportunities, conserve water for farmers and provide renewable energy."

Fontanos told BenitoLink that the proposed facility would supply a process in which spoiled lemons, for example, could become highly-potent fertilizer for future crops, and reduce demand for water among local and regional farmers. In the event the project comes to fruition, according to the county, resource recovery parks could start popping up in more populated areas littered with long-term impacts of trash.

Despite the aspirations, the project has made some nearby residents uneasy.

"I do not think that county officials have done all of the work they need to do for this project," said Sally Silva, a resident of Santa Ana Valley, where the county aims to house the facility. "Officials should be accountable according to the same standards expected in the private sector for a project of such magnitude."

Tammy Jackson, a daughter of Silva who also lives near the project's proposed site, shared her perspective in a telephone interview Friday with BenitoLink.

"I hope that San Benito County can be known for more than a landfill and resource recovery park," said Jackson. "I think that the county could have a better view of the bigger picture related to potential traffic and pollution, and other possibilities."

Jackson expressed uncertainty over whether composting would occur on the property slated for a private lessee.

The heavy industrial district, according to local law, specifically requires a conditional use permit for any garbage dump or a facility such as a nuclear reactor, which is not proposed in the county.