None showed symptoms and all received a judge’s approval. 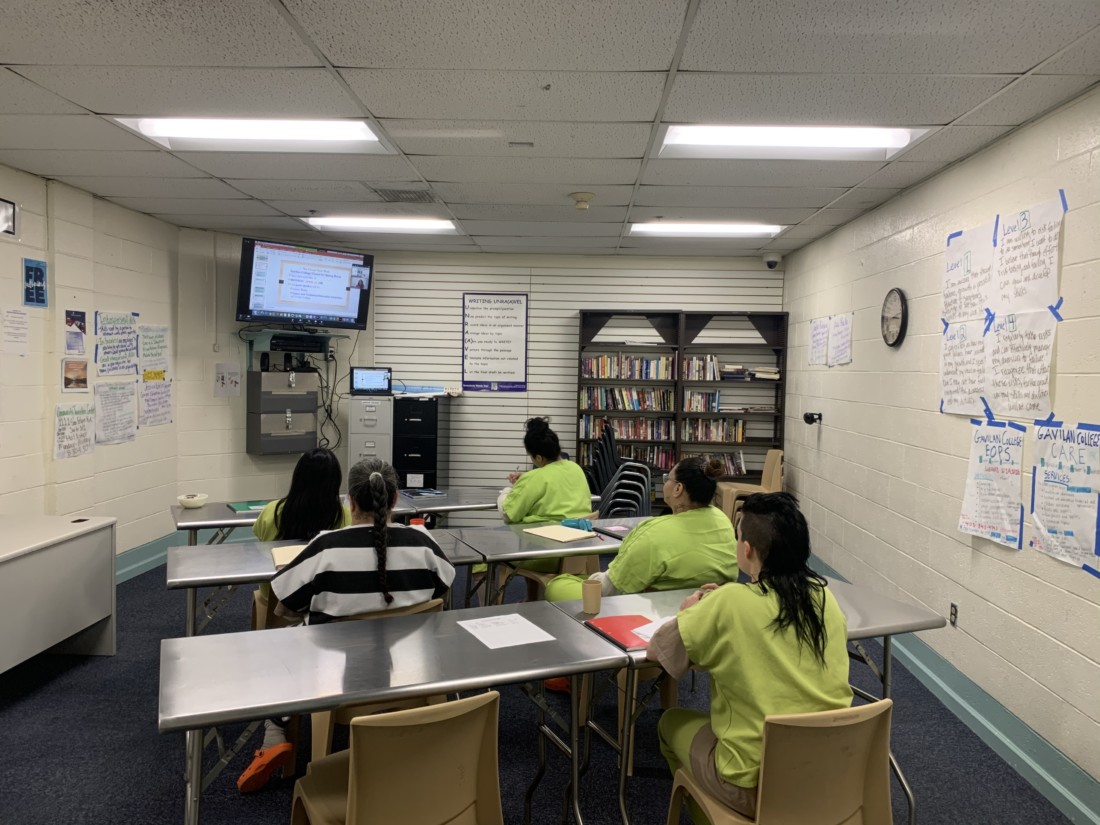 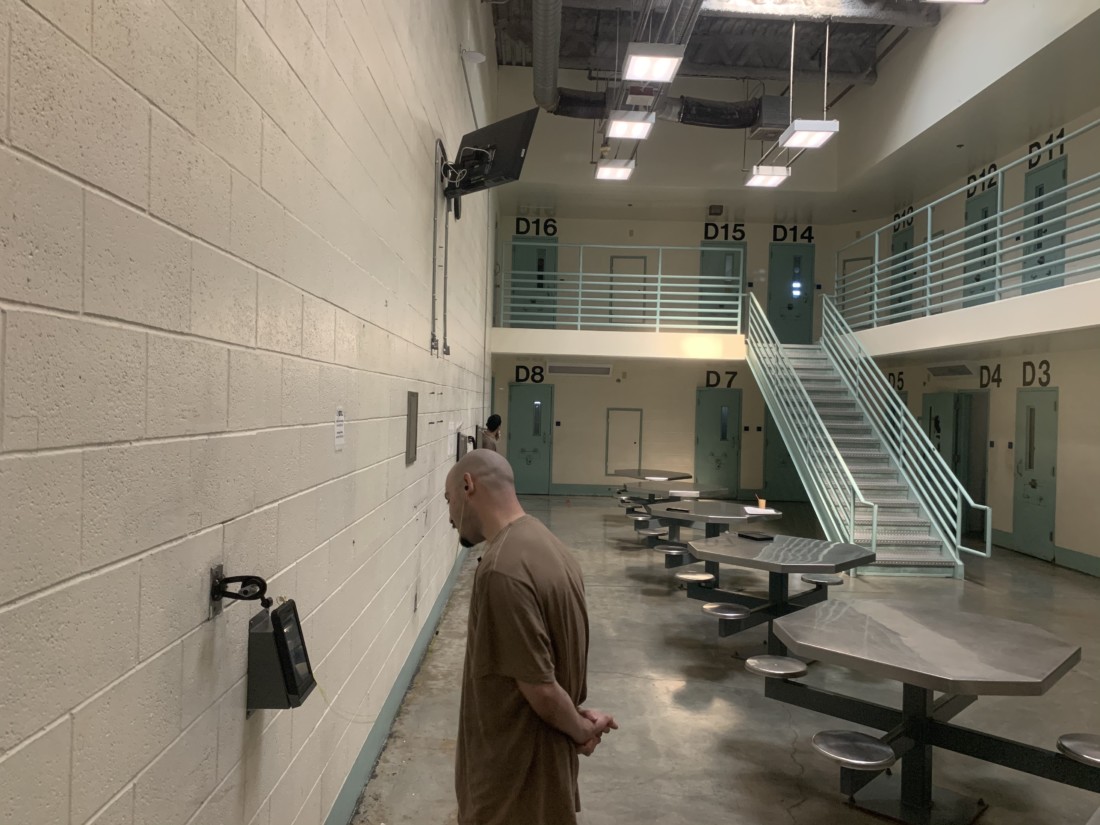 An inmate at the jail having a video chat because face-to-face visitations are temporarily prohibited. Photo provided by SBC Sheriff's Office. 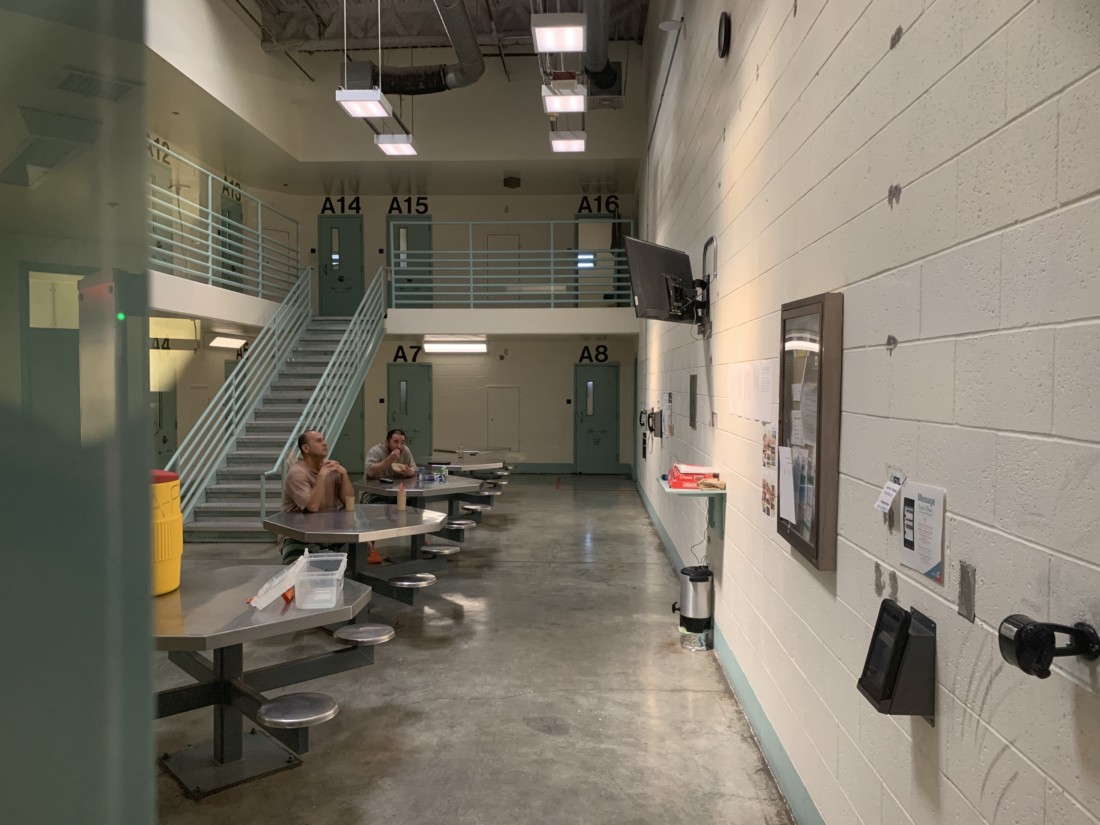 Thirty-five inmates were released early in order to have more flexibility in moving around others should COVID-19 appear in the jail. Photo provided by SBC Sheriff's Office.
×

The San Benito County Sheriff’s Office confirmed that as of March 19, 35 inmates were released from the county jail in response to the COVID-19 pandemic.

“This is mainly in part if an inmate does test positive for the virus, I will have options to move inmates around the jail for their safety and the safety of others,” Capt. Tony Lamonica told BenitoLink on March 30. “We currently have 76 inmates and there are five to seven correctional officers per shift.”

None of the 35 inmates released showed signs of COVID-19, Lamonica said.

“Our county jail, along with other county jail facilities, are working with judges to release inmates that are already sentenced and have 30 days or less to serve out their sentences,” he said. “We send a list of sentenced inmates to the judge to get his approval prior to releasing them. We also look at individuals who are vulnerable to COVID-19 for immediate release, unless there is clear evidence that a release would present an unreasonable risk to the physical safety of the community.”

According to Lamonica, the Centers for Disease Control has classified vulnerable inmates as those who are elderly and those with asthma, cancer, heart disease, lung disease and diabetes. In allowing certain inmates an early release, he said it is primarily to protect other inmates and staff by making room in case an inmate comes down with the virus.

“Having a lower population means less infected, more room to isolate and quarantine to keep the virus from possibly spreading,” he said.

Jail staff, along with medical personnel, are reminding inmates prior to being released how to prepare for a healthy return to the public.

Correctional officers are taking health precautions on the job. Lamonica said his staff has sufficient personal protection equipment and have been fitted for N95 masks.

“Our onsite medical provider has informed and trained my staff and inmates on measures they can take to minimize their risk of contracting or spreading the virus,” he said. “They have been educated on the importance of proper handwashing, coughing into their elbows, and social distancing to the extent they can.”

Steps are also being taken when it comes to bringing in new arrestees. Staff has been instructed to ask the arresting officer or deputy a series of coronavirus pre-screening questions before they enter the facility.

“These are the same questions we ask our vendors before they enter our facility,” Lamonica said. “If the arrestee answers ‘yes’ to any of the questions, the officer/deputy must get the arrestee medically cleared at Hazel Hawkins Hospital before being housed.”

One correctional officer recently became ill and was examined by their own doctor, Lamonica said. The results came back negative for coronavirus, and the officer has since returned to work.

If an arrestee taken to the hospital tests positive for COVID-19, Lamonica said they could end up staying there depending on the charges and how serious the symptoms are. There would still be an around-the-clock guard on watch, either a sheriff’s deputy or a hired armed contractor through Condor Security. Someone charged with a homicide, for example, would most likely be kept at the jail, unless they were already seriously ill and required a ventilator.

While the lobbies of the San Benito County Sheriff’s Office and Hollister Police Department are closed to the public, the jail lobby remains open.

“The main reasons the lobby continues to remain open is for family and friends to be able to walk in and use the kiosk to put money on their loved ones’ accounts for commissary and phone calls,” Lamonica said. “We have cancelled all in-person visitation and programs at the jail. Our vendor, who provides phone calls, has offered the inmates two free five-minute phone calls a week. We also offer the inmates video visitation. Video visitation is the use of videoconferencing via a computer, internet, and webcam.”

Two weeks ago, the jail asked Gavilan College if they could continue to teach classes to inmates through live video rather than in person.

“Gavilan College was more than happy to accommodate and as of last week the inmates have resumed classes through Zoom live webinars,” Lamonica said. “The San Benito County Jail also has a full-time mental health worker who is in communication with staff and inmates checking on their wellbeing on a daily basis.”

The early-release program is not without controversy. A New York Times article compared federal prisons and county jails to petri dishes and ticking time bombs, where COVID-19 could thrive and spread among prison populations that are unable to avoid it by practicing social distancing. The story notes that, “Defense lawyers, elected officials, health experts and even some prosecutors have warned that efforts to release inmates and to contain the spread of the disease are moving too slowly.”

The Marshall Project, a nonprofit journalism organization that reports on the criminal justice system, reports that some believe Attorney General William Barr’s COVID-19 release plan could favor whites over minorities “because it instructs the prison system to prioritize for release only those prisoners who receive a minimum possible score on a ‘risk assessment’ algorithm called PATTERN.”

Lamonica made it clear that this was not the case in San Benito County.

“We did not release any individuals with violent charges, burglary charges, or sexual offenses,” he said. “Of the 35 we released, their charges ranged from probation violation (related to drug charges, alcohol charges, court order violations, DUIs,) to drug charges. We released a mixture of females and males who are Hispanic and white. The Sheriff’s Office responsibility is and will always be the safety of the community first.”