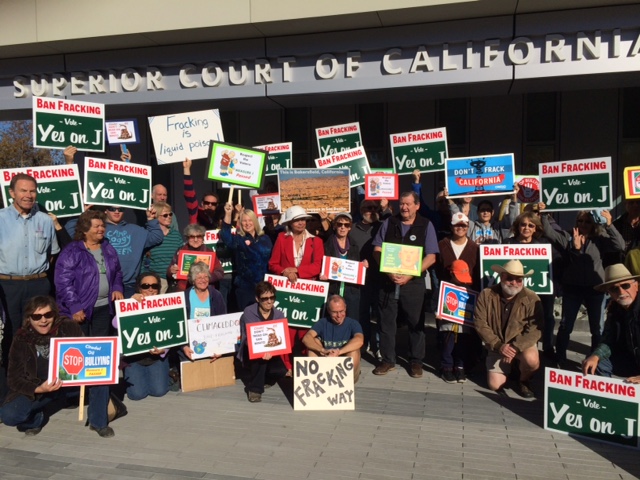 San Benito County's Board of Supervisors unanimously authorized the creation of a public fund Tuesday for private donations in defense of Measure J, a voter-approved ban of high-intensity petroleum operations fueling constitutional concerns in both sectors.

The move March 17 followed a private grant by The Schmidt Family Foundation — a charitable organization founded by Eric Schmidt, the executive chairman of Google Inc. — to San Benito Rising, a local group of environmental advocates who successfully launched Measure J ahead of the 2014 election.

County Clerk, Auditor and Treasurer Joe Paul Gonzalez said that the public vehicle for private funding would provide a source of payment to independent consultants for the legal cost of the initiative, which outlaws hydraulic fracturing, cyclic steam injection and matrix acidization.

"The idea is this would be a mechanism providing an opportunity for anyone who supports the legal defense of Measure J to directly make a contribution to local government," said Gonzalez in a statement to BenitoLink Tuesday outside the county's administrative building, across the street from the courthouse where Citadel Exploration Inc. filed suit over the initiative.

Critics of Measure J, whose pre-election campaign generated a fraction of the funds injected by opponents, have claimed that the ban in effect constitutes a regulatory taking, a violation of the Fifth Amendment. Citadel, a California oil producer, alleged in a civil complaint in San Benito County Superior Court on Feb. 27 that the new regulation grants too much power to county officials. The Newport Beach company emailed a statement March 18 to BenitoLink.

"The County of San Benito is now asking for people that are not responsible for the mess to clean it up," said Citadel CEO Armen Nahabedian. "It is tragic that the morality of county staff is so low that they would ask for donations to assist them in defending a law that causes blatant irreparable harm to property owners and the oil and gas industry."

With the approval of a legal fund, supervisors Tuesday also called for financial transparency, as well as further development of the county's website and other resources to solicit donations that the county expects to keep separate from public money for accountability purposes, according to the local government. Gonzalez recommended a new account with Bank of America Corp., which oversees the county's checking account, to manage the public's charity.

The Schmidt Family Foundation, a private source of capital according to one of its digital properties, has funded a grant of $25,000 that aims to protect Measure J in litigation. The charitable entity of the prominent family has not responded to numerous queries by BenitoLink.

Citadel said Wednesday that the new regulation "was drafted without considering the actual impacts of the techniques and technology" now outlawed as a result of the voter-approved measure.

"The county had numerous opportunities to defer adopting the law until comprehensive analysis was complete on the operations that are now prohibited and they additionally failed to consider the enormous economic benefits that the county would see from modern, safe oil and gas development in their area," said Nahabedian. "I am further disgusted by the decision making of the so-called leaders in San Benito County with each passing day."

Gonzalez told BenitoLink Tuesday that private interests among donors who support the voter-approved initiative do not directly involve the county.

"Should any donation to the defense of Measure J fall within the mission of a private donor, the county would have no problem with that," said Gonzalez. "The county's concern is successfully defending Measure J."

In a public meeting Tuesday, the board also approved an agreement between the county and Cota Cole LLP, providing a flat fee of $36,000 for defense services in litigation against Citadel, one of several oil producers concerned about the effect of Measure J on constitutional rights.

Comments by Citadel Exploration Inc. were added to this story at 12:50 p.m. March 18.