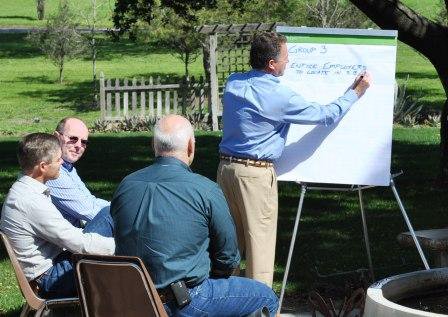 Armstrong participates in a group meeting on the county's future
×

“It’s like going home for me,” Armstrong said. “We have three sons who live in Southern California and a job opportunity came up near Newport Beach that fit. There are many reasons I decided to go, but most are personal.”

Armstrong accepted the Deputy CEO position in the City of Costa Mesa (neighbors to Newport Beach) and will be focusing on economic development and city management. For San Benito County, that means the search for a new Planning Director at a crucial time when the county is working to approve a new general plan in coming months.

“Gary came here at a time when a number of planners were looking for an opportunity, in the middle of the recession, and now that things have improved, he found another opportunity,” said San Benito County Supervisor Anthony Botelho. “He served this county very well and I think everybody wishes him the best of luck.”

Armstrong has been instrumental in preparing the county’s general plan and overseeing the approval of several major new developments, including Santana Ranch and the proposed new Resource Recovery Park adjacent to the county’s landfill on John Smith Road. The general plan is expected to be approved in the next several months and will act as the guiding document for new development in the county through 2038.

“I think the general plan is in a good place,” Armstrong said. “We still have about a week of public comment and then we can move forward.” Armstrong expressed confidence in his deputy director, Byron Turner but cautioned that county leaders need to figure out how to pay for new developments.

“I really think we need to restructure the revenue system and ensure that we have the funding in place for new infrastructure that will support development,” he said. “We’re in an unfortunate situation now that does not provide adequate funding for the (planning) department.”

Supervisors said they will most likely depend on current staff for the time being.

“I think we’ll probably begin with an internal designation until we make a final decision on a new director,” Botelho said. “We have confidence in (Assistant Planning Director) Byron Turner. As far as the General Plan, we certainly feel that this will have no affect on that. What we do need to do is to get another planner in that department. Without question, things are about to pick up. Earthbound Farm continues to grow, Santana Ranch is about to break ground and San Juan Oaks is also gearing up for a proposal. I’m excited about the direction we’re headed in, we have a balanced budget and we’re ready to eliminate furloughs.”

Armstrong came to the county in August of 2010 from the private sector. He worked as a consultant at RBF Consulting, one of the nation’s leading civil engineering, design, planning, surveying and construction management firms, and was hailed as great fit for the county with his background in both public and private sector development. He was an active participant in Vision San Benito County’s 18-month visioning process of asking county residents what it is they wanted to see happen in the next 25 years here and worked closely with consultants to move the general plan along.https://benitolinkcom.wpengine.com/videos/whats-community-vision

Armstrong was optimistic about San Benito County continuing to be an attractive place for developers, but stressed the need to increase development fees.

“Development is going to come when it comes and San Benito County will still be the best place as far as climate, scenery, location to developers irrespective of fees. I think the county needs to make developers pay their way, their fair share. Otherwise, you won’t get what you need to keep things running smoothly,” Armstrong said. “What you need is a board that’s willing to re-evaluate its strategy and make some policy decisions.”

San Benito County is attracting attention from various conservation and environmental groups for its natural beauty and largely undeveloped areas –  a rarity in crowded California. A recent e-mail sent by the Sierra Club to local members urged residents to get involved.

“San Benito County is how California used to be 100 years ago and is one of the last large pieces of open space, farmland, and nature in our state. As you may already know, San Benito County is finalizing its 2035 General Plan Update and Sierra Club is really concerned about it and we think you should be too. The General Plan encourages substantial urban development on agricultural lands and will allow tens of thousands of people to sprawl on the 800,000 acres of farmland. To share a personal story, as a resident of San Jose, a place that looked much like San Benito County 60 years ago, the fact that we uncontrollably sprawled after WWII is one of the biggest regrets of our city for obvious reasons: loss of open space, farmland, and habitat while making it impossible for the majority of residents to walk, bike, or take public transportation. With our recently adopted 2040 General Plan, we’re trying to undo some of this damage but it’s almost impossible to un-sprawl. It would be such a loss if the San Benito County replicated San Jose’s mistakes, especially because we know more about how to build great places today than we did decades ago,” Megan Fluke Medeiros, Conservation and Development Manager of the Sierra Club Loma Prieta Chapter wrote to San Benito County members.

Local property rights advocates have criticized the Sierra Club for not understanding the needs of local residents.

What do you think the county should look for in a new Planning Director? Add your thoughts in the Comments Section below: