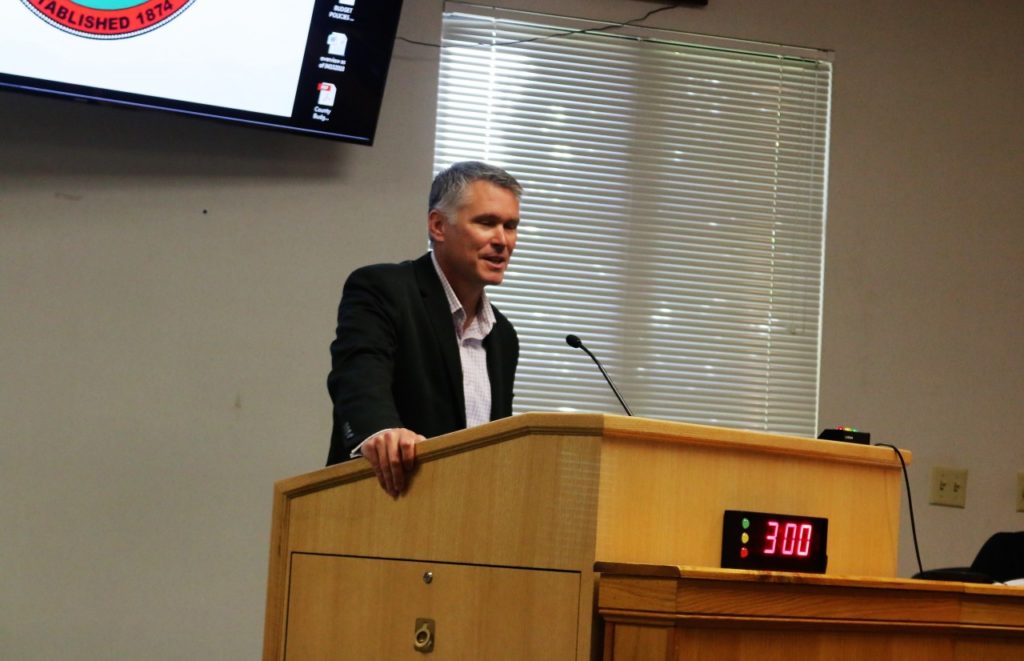 There was more than enough blame to go around for everyone at the May 8 San Benito County Board of Supervisors meeting when it became public knowledge that the county had not paid one of its consultants for work totaling nearly $500,000 in support of the planning and building division of the Resource Management Agency (RMA).

Even though RMA Director John Guertin wasn’t at the helm when 4Leaf Inc. was hired, he explained to supervisors what happened and asked them to approve funds to pay the long-overdue bill totalling $490,550, as well as extend the contract.

“This all happened before I got here,” Guertin began, “but I’ll try to piece it together for you because I’ve been trying to figure it out for myself.”

What Guertin described was almost rampant confusion following the sudden retirement of RMA Director Brent Barnes early last year. Two consultants were hired to take over in the interim, a number of staff left, and the County Administrative Office (CAO) stepped in to help with day-to-day management.

Shortly after Barnes left the county in March 2017, supervisors approved an amendment of a contract with 4Leaf Inc. to act as the interim director of RMA beginning March 22, 2017. The amendment increased the original contract for two consultants, Larry Perlin and James Walgren, to $234,000 for a one-year period, as compared to Barnes’ $169,000 annual salary. Guertin was onboard by September to head the Resource Management Agency.

“The CAO’s office was bringing contract staff in to fill the holes as fast as possible to keep things from falling apart,” Guertin said. “When you move fast sometimes you don’t dot all the i’s and cross all the t’s, and this was one of those circumstances. Contracts were done quickly and there was no way they could foresee that 4Leaf was going to be onboard for so long. The contracts didn’t have sufficient funding at the time. They just slipped through the cracks and weren’t amended in time to pay the invoices.”

Guertin said once the unpaid invoices and contract issues were brought to his attention, his staff worked to iron out the situation. Medina described it as a teachable moment and asked what Guertin intended to do to prevent such a breakdown in communications from happening again.

“We just can’t have this and I want to make sure there’s a process in place and you are accountable for it,” Medina said.

Guertin agreed that what had happened was unacceptable and put the county in jeopardy. He said not paying vendors in a timely manner or asking them to work outside of contracts destroys goodwill.

“Realistically, we’re not legally obligated to pay them, but ethically we are required to pay them for any work we ask them to do,” Guertin said. “They shouldn’t be working outside of contract, but they do because they recognize the struggles we’ve had and they want to help us. 4Leaf took a great risk doing this for us and continuing to provide services knowing the situation that we were in.”

In an email to BenitoLink after the meeting, 4Leaf President Kevin Duggan responded: “4Leaf is honored to support the County of San Benito RMA with building inspection, plan review and technical assistance to the planning and building divisions. We look forward to continuing to provide the essential services in the future and hope that we will be able to serve the San Benito County community well for the term of our agreement.”

Guertin said he and his staff are developing procedures to track contracts. Medina said the remaining portion of the 4Leaf Inc. contract is $144,593 and wondered if the county would continue to work with the consultant once the contract period was completed. Guertin responded that 4Leaf may not continue providing services, but it or another contractor will continue planning reviews because there is not enough work to warrant hiring a full-time staff member.

Guertin further said there was confusion about who the consultant should send invoices to because they were working with different county offices. He said no one with the county apparently knew what to do with the invoices.

County Auditor-Controller Joe Paul Gonzalez told the board during the meeting that he doesn’t automatically pay an invoice just because it lands on his desk.

“Invoices came in, but we will not pay invoices without a contract,” Gonzalez warned. “With the board’s action today, authorize that payment. Without your authority there will be no payments to vendors.”