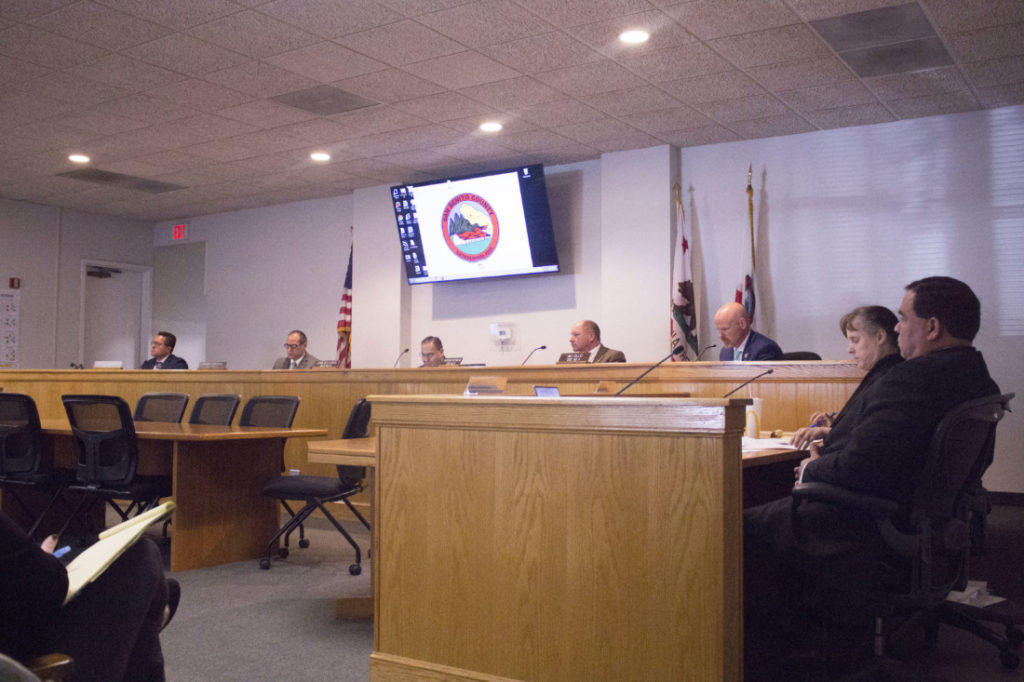 The San Benito County Board of Supervisors at a Jan. 14 meeting. Photo by Noe Magaña.
×

After a 40-minute discussion on whether San Benito County should enter into a nondisclosure agreement with Big League Dreams USA, LLC to develop plans for a sports complex, the Board of Supervisors unanimously voted to table the item at its Jan. 14 meeting. The board also tabled a motion to grant authority to County Administrative Officer Ray Espinosa to sign NDAs in the future.

The county requested financial information from Big League Dreams in response to the company’s interest in designing a sports complex in San Benito County, according to the meeting agenda packet. Big League Dreams requested the NDA, a contract that prohibits involved parties from sharing any information listed in the agreement.

Big League Dreams is known for its constructions of scaled-down replicas of famous stadiums.

The request for an NDA raised a red flag for Supervisor Anthony Botelho and members of the public. The item was pulled for discussion from the consent agenda, where multiple items are typically approved with a single vote. Botelho said he pulled the item because he was concerned about the transparency of taxpayer money and circumventing the standard procedure to develop parks through the San Benito County Parks and Recreation Commission and the parks master plan.

“It seems like we spent a lot of money on a parks plan, particularly that area, the regional park, and now we’re kind of changing that,” Botelho said. “There should be a process of community input through the commissions and continue to work with the city [of Hollister] as well if we’re going to look into a specific concept. Shouldn’t we be doing an RFP [request for proposal] for other companies?”

He also said that though nondisclosure agreements may be necessary in proprietary rights issues, supervisors had not received a report on where the sports complex process stands in this regard. The county has worked on a regional park concept for several years, and a sports complex is identified in the parks master plan.

Later in the meeting, Espinosa told the board that the county had reached out to other companies for quotes. Supervisor Peter Hernandez said there had not been a presentation on a sports complex because a concept had not been generated.

Supervisor Jaime De La Cruz, elected the new board chair at the meeting, and Hernandez advocated for the NDA and said it was the county’s way of doing its due diligence in gathering information to create a concept.

“It’s premature to produce anything the public will hold as tangible,” Hernandez said. “Big League Dreams does have their models, but that model doesn’t necessarily apply. That’s why staff has to even consider what is viable. There are all these different layers to consider before we even say ‘okay let’s talk about a plan.’”

Botelho asked county counsel Barbara Thompson to explain the difference between the NDA and other contracts. Thompson said because she had not had contact with Big League Dreams, her assumption was that they would present their financial capability and a proposal. She said if the company presented a proposal and the county decided to go to a request for proposal for the project after all, then the request for proposal should be done by someone without knowledge of the confidential information covered in the NDA.

Several members of REACH San Benito Parks Foundation, a nonprofit organization that advocates for public parks and open spaces, expressed concern about a lack of transparency.

While REACH secretary Anita Kane said she wanted the county to stay competitive even if they met with Big League Dreams, REACH treasurer Robin Pollard said the organization didn’t oppose a sports complex, but that the main issue was having it close to the San Benito River. She also said she called eight cities that developed a sports stadium through Big League Dreams to obtain information on whether it was a good partnership.

“I could not get one city to say it was a good or a bad thing that they went into partnership after 18 years of having a partnership with them,” Holler said.