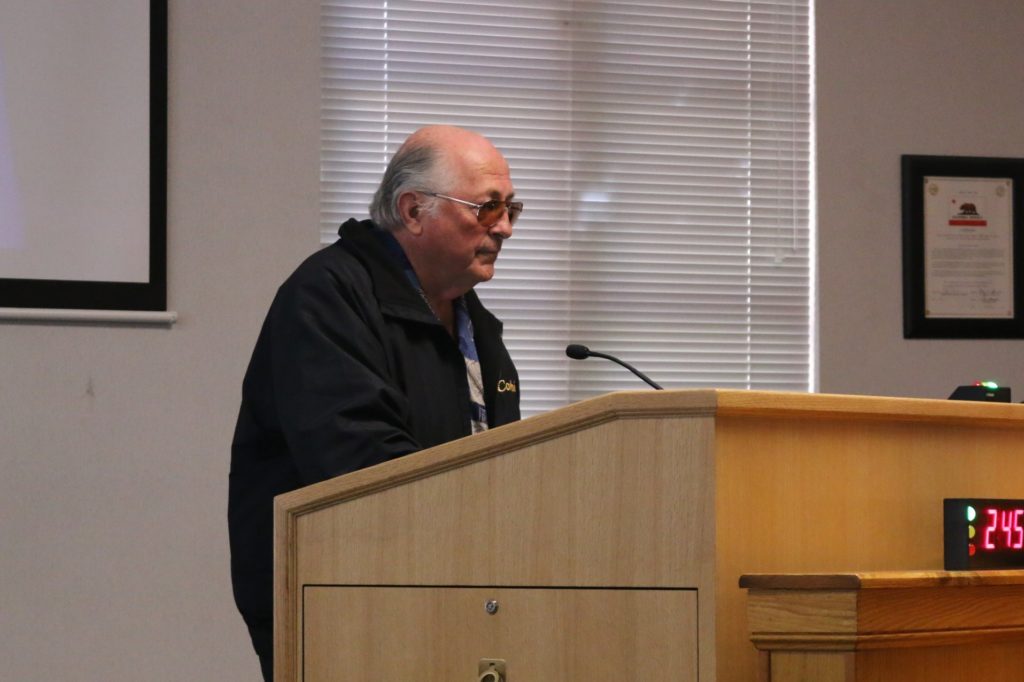 With the winter migrant camp expected to open to homeless families up to a month after its traditional Nov. 1 start, Jim Rydingsword, director of the San Benito County Health and Human Services Agency, presented an update to the Board of Supervisors on Nov. 3. He said that he was notified by the state that the agency had received an allocation of $166,000 targeted for homeless families and he expects action to be taken as early as December.

“The basic idea is to help homeless families to find temporary and permanent housing to meet their needs and to transition from homeless to being more self-sufficient,” he said.

He said there have been discussions for the last two months regarding the winter shelter program.

“We’ve been meeting with the Homeless Coalition about expanding the program at the migrant center,” he said. “We talked with the Farm Laborer Association about that and they’re okay with it. We have some new funding, in the neighborhood of $150,000 (Intergovernmental Fund Transfer), that the board already approved in September.”

The agency, Rydingsword said, has had conversations with the city about putting up some funds for the expanded winter programs.

“Since it started raining yesterday, there seems to be a little bit more urgency to have this discussion,” he said.

Supervisor Anthony Botelho asked Rydingsword about the status of the migrant camp, which was scheduled to open Nov. 1 to homeless families.

“It didn’t open Nov. 1 because there are still some folks there who are involved in farming,” Rydingsword said. “The date that the Homeless Coalition told us (Monday) that they expect to open it Dec.1, or earlier”

“It sounds like your department and the city are trying to work together to make sure everybody is accommodated,” Botelho said. “Does that mean the other facility will still operate at the Homeless Coalition or is it going to be us (the county)?”

Rydingsword answered: “Yesterday we were going over details of what would happen if they wanted to operate it. We’re moving forward to probably amend the current contract and bring an item back to the board. If the Homeless Coalition decides they don’t want to operate it, and I hope that they do because I think it’s an easier transition to do that, but if they don’t, Health and Human Services will put something together to try to make that happen.”

Supervisor Robert Rivas said he hoped the board could have a regular agenda item for the next meeting.

“This is a big issue,” he said. “There is no doubt that we need the extra beds to be prepared. I attended the Homeless Coalition meeting last Saturday, and it was the first time they heard about it.”

Rivas said he believed the Homeless Coalition was not willing to take on the responsibility of operating an emergency shelter, and that the county isn’t prepared to do so, either.

“I need to be convinced that we are prepared,” he said. “It’s Nov. 3, and we’re way behind the ball on this. It’s absolutely unacceptable to assume that the coalition can fund this. What kind of impact are these additional funds going to have on the original grant? I have a lot of questions that I think need to be addressed in a regular meeting and not as a department head discussion.”

Rydingsword said his department is prepared to have an agenda item for the Dec. 17 supervisors' meeting.

“The rating factors are pretty self-evident pertaining to proximity to neighbors, transit, and compatible land use,” he said. “We also discussed fatal flaws, such as if a site were straddling an earthquake zone, or if there is an existing building where rehabilitation is beyond the level of the norm to convert the building to residential use, that would be a fatal flaw and we wouldn’t want to pursue the project.”

Barnes said there are six locations under discussion. He said the process would move forward after thoroughly studying each site and taking into consideration any input from the board.

“I’m not anticipating that we would rank a site on proximity to neighbors,” he said. “I think there will be enough variation between the sites that we’ll intuitively be able to see which one is the best and we’ll come to you with a strong recommendation that we move forward on a particular site.”

One of the six sites under consideration is located on Flynn Road near the county jail and the Hollister Municipal Airport. One opponent of that location is Mike Corbin, owner of Corbin Motorcycle Seats and Accessories. He spoke at the meeting and submitted a letter asking that the board remove the Flynn Road site from evaluation and consideration. The letter was signed by a number “concerned community members, local business owners, managers and employees.”

Corbin said when he moved his facility from Castroville to Hollister in 1998, it was primarily to build a larger facility in an industrial zone. He said his 38,000-square-foot building is now worth $6 million and he is thinking about the future and that zoning is important for growth.

“I think one of the best shots that Hollister has to become part of the industrial economy as it’s starting to perk up is the airpark,” he said. “Even when I moved here in ’98, I was looking forward to the airpark being developed so businesses could use the airport for transport. Another thing you want to think about is that there are a lot of trucks on our industrial streets. It’s not good to have people in the streets of an industrial park.”

Corbin added that the city should be looking at the airpark for opportunities to stimulate jobs and the economy from the perspective of a business person thinking about locating in Hollister.

“That’s where the decision has got to be made,” he said. “They’re (business people) thinking they’ve got to build a building and what they’re going to do with it 20 years from now; what’s the workforce like; and they’ve got to have the right kind of zoning.”

Corbin said he supports homeless development, but he doesn’t think that the homeless would be comfortable in an industrial park.

Pat Riley said her family owns the Flynn Road Mini Storage, which she believes would be affected if the homeless shelter was located across the street from the business. She said—as someone who has sold real estate in the area for 42 years—that she would be happy to help look for a more appropriate site.

“I’m trying to picture this whole situation,” she said. “The county builds this homeless shelter. Who’s monitoring the homeless people? How do they get to town for groceries? My idea is to put them behind the Social Service building on San Felipe Road.”

Riley said there is farm land behind the building and that she would be willing to investigate who owns it and said a road already exists that can be easily accessed.

“The homeless need those services and if we put them over by the jail then can walk to town along with the guys who’re being let out. That’s not too good an idea,” she said. “It’s almost three and a half miles into town and I can’t see them walking along the highway. Put them close to where they can get help. Social Services are there to help them. Welfare is there. Medical is there.”