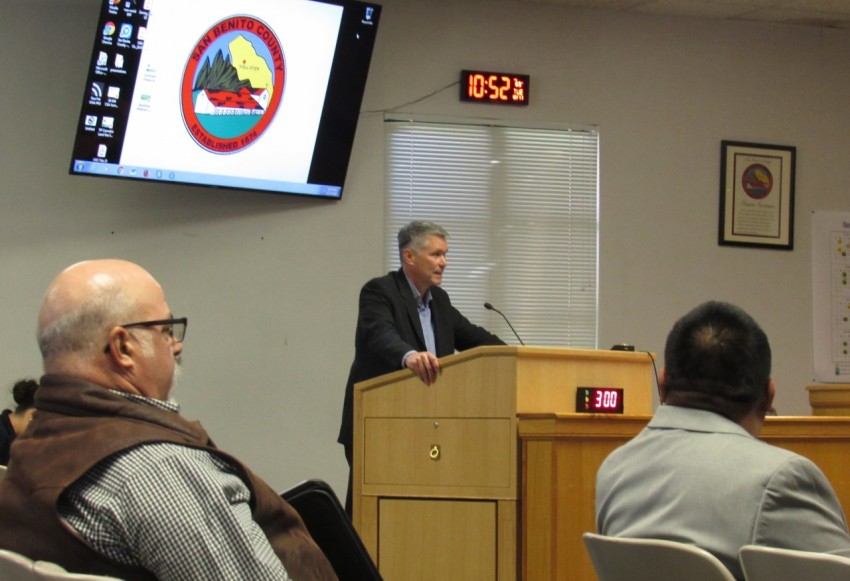 The San Benito County Board of Supervisors announced Dec. 11 the hiring of a county service area (CSA) coordinator and approved street sweeping contracts in several neighborhoods as the county faces pressure to provide services it has failed to deliver in recent years.

A CSA is an agreement between the county and a homeowners’ association (HOA) to provide certain maintenance services paid for by adding a percentage to the HOA members’ property taxes. There are currently 32 active CSAs in the county, according to the agenda packet.

CSAs were created in the 1950s to “fund the long-term and maintenance of public infrastructure within specific communities that the county would not otherwise be able to fund through traditional sources” like property, sales or fuel taxes, according to the county website.

Though the program has been in place for over 50 years, Claudette Frey, a county accounting employee, told BenitoLink on June 25 there has never been a full-time CSA coordinator.

That has changed, however, as Resource Management Agency Director John Guertin told the Dec. 11 meeting that Jessica Stratton would be the program coordinator. Stratton told BenitoLink she began working for the county on June 4. She previously worked for the city of San Jose.

According to the job description, the CSA coordinator is responsible for budget and contract management, and assists on policy and procedure implementation.

Also at the meeting, Precision Civil Engineering, Inc. presented a report to the supervisors about their findings of the CSA program.

According to its report, which was attached to the agenda, there are nine CSAs with no revenues or fund balance:

The report recommends investigating the lack of funds and dissolving inactive CSAs.

The report also recommends that San Benito County improve its public information about county service areas, have neighborhood meetings and working groups, and improve its website.

While supervisors agreed that inactive CSAs should be given notice that San Benito County is looking into dissolving them, there still seemed to be some confusion about whether it was legal for the county to provide services to roads protected by gates, such as gated communities.

Chuck Serafini, former governing member of the Union Heights HOA, said the gates to the community are not going to be taken out, as was suggested in the presentation by Precision Civil Engineering.

The only way that would happen, Serafini said, would be if Union Heights Road became a county road, and the county, not a CSA, would be responsible for road maintenance and storm drainage.

Serafini also said the Union Heights CSA had met with Supervisor Anthony Botelho and the public works department annually for three years and were promised the county would slurry the roads, but always received excuses when it didn’t happen.

“We haven’t seen a damn person out there in those three years so now we are faced with an additional expense because we got a road that is deteriorating,” Serafini said.

Supervisor Mark Medina said CSA monies are not public funds and should be used toward road maintenance. However, Supervisors Jerry Muenzer and Jaime De La Cruz wanted a definitive answer on whether public funds can be used in gated communities.

“The legal department needs to solve that,” said De La Cruz, who also requested a monthly report on CSAs during the meeting. “We just can’t let it out there and some members of the community think no and other members think yes.”

Members of affected CSAs and homeowners associations voiced their frustrations with the county during public comment.

CSA 9 Ridgemark members Jack Murphy and Stephen Mills, vice president of the Ridgemark HOA, said their biggest issue was not using the accrued revenue, which is now about $600,000.

The Ridgemark HOA and the county were at odds earlier this year over whether money collected through the CSA could be used for road repair.

Mills said county staff stated they cannot take any action without board approval, despite the funds being available.

“Your definitive direction to staff is an imperative,” Murphy said. “My view is we start over today.”

Richard Ferreira, developer of the Union Heights subdivision and liaison to accompanying CSA 35, said the negligence of maintaining the roads and storm drainage system has caused homeowners additional expenses for damages.

As previously reported by BenitoLink, Ferreira has pressured the county to provide services since 2009 and threatened legal action.

He said he was involved in drafting the CSA 35 agreement and his extensive familiarity with the agreement has allowed him and San Benito County to overcome different issues, but that RMA Director Guertin wasn’t interested in providing a solution.

“I have never met somebody in that position that was so arrogant, rude, customer unfriendly, lied to me, and from some of his actions, unqualified for the job,” Ferreira said. “As far as CSA 35 is concerned, the only thing I’ve seen him do is try to figure ways to get out of performing the contractor obligations.”

In talking to other CSAs, Ferreira said it seemed that Guertin was trying to force them to “bail out” with high bids for services. The county’s revenue figures in CSA accounts do not match the amounts collected through taxes, Ferreira said.

“You the board, it is your responsibility to right this wrong and get us back to the same standards the CSA operated for 19 years successfully,” Ferreira said.