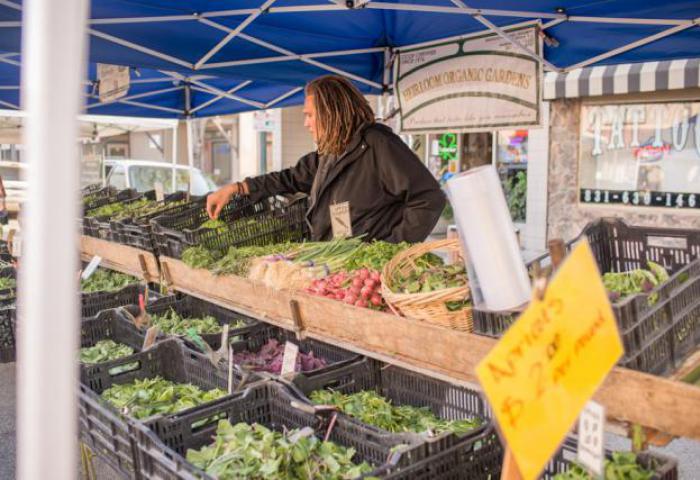 The Hollister Downtown Certified Farmers’ Market will once again be open for business on San Benito Street May 4 through Sept. 28, from 3 to 7:30 p.m., every Wednesday.

Farmers’ Market has been a special summer-time offering for more than 27 years, and offers locals and out-of-towners an opportunity to buy fresh produce from as close as Swank Farms, just down the road a couple miles down the road, to a farmer who drives all the way from Fresno.

Anyone who is not a nonprofit organization and is interested in being a vendor will pay a one-time application fee of $40 for the entire season, and each week that they actually come is $35 for a standard booth, according to organizer Tammy Jackson. She said discounts are available to anyone who sets up a double or triple booth.

Jackson said there has been no formal research to determine how many people come to the market, but she said there have been as many as 6,000 show up during a busy day.

“When I first started here, seven years ago, I reached out to the local people (to be vendors),” she said. “But Hollister doesn’t have the best reputation for being the busiest, as far as markets go, so a majority of the locals who had never joined us before weren’t interested because they make so much more money going up to Bay Area markets.”

Jackson said locals were polled about what they would like to see offered at the market. Some said they wanted kettle corn.

“The kettle corn actually comes from Benicia, and since then we’ve had some Hollister residents who have kettle corn businesses, but we can’t just kick out the people who have been with us through thick and thin,” she said. “It’s been kind of a hard thing to explain to locals.”

The market, she noted, has a strong following of shoppers from Morgan Hill.

“We’ve had people comment several times that they like our market and they’re willing to drive to Hollister rather than go to the Morgan Hill market, which is a good thing for us,” she said.

The market no longer offers any meats for sale, Jackson said.

“They don’t make enough money here,” she said. “The demographics here is not suitable for those types of booths that are high end. We used to have organic eggs and chicken. We used to have pork, beef and goats. There’s just never been enough profit for them to come.”

While none of the local restaurants, except for R Mexican Food near the Premiere Theaters, are participating, there will be baked goods from Heavenly Bakery and San Juan Bakery.

Jackson said she has seen a steady increase in the market’s popularity.

“What was interesting last year was, across the board, farmers’ profits were down about 25 percent,” she said, “but they mention that was everywhere and not just in Hollister. There are a number of theories why that is, but I think as more chain stores are carrying organics it’s more convenient because everyone is so busy, and it’s all about time, and people are not willing to try and find a parking place downtown just to get their vegetables, so they just pick everything up in the organic section of their grocery store.”

Despite that downturn, many residents are anxious to have access to the spring and summer bounty from area fields and orchards offered at the outdoor market.