Recent string of quakes is "not necessarily a harbinger" of a larger quake, USGS geologist tells BenitoLink 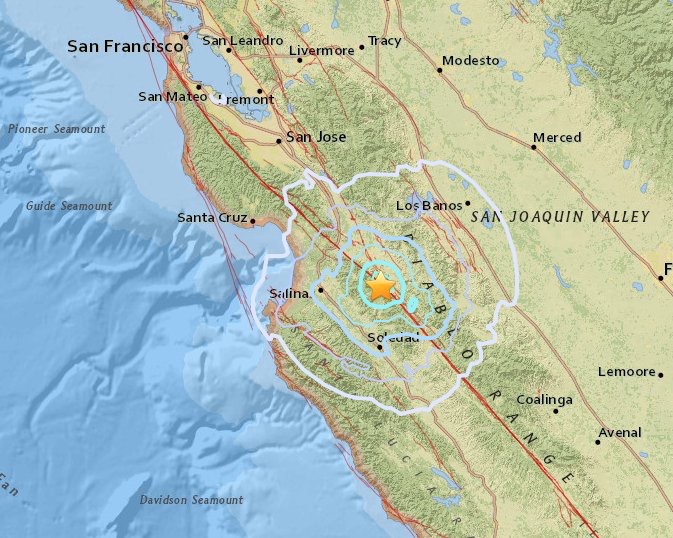 Recent earthquakes on the San Andreas Fault — primarily centered less than 10 miles south of Hollister over the past three to four days — "appear to be a small swarm" toward the north end of a creeping section of the fault, geologist Russell Graymer told BenitoLink on Tuesday. The latest shakers included a 4.2 temblor that occurred at 2:38 p.m. on July 19, 8.1 miles south/southeast of Ridgemark Golf and Country Club.

"The fault there is not perfectly vertical, but tilts steeply down to the west, so the upward projection of earthquakes to the surface (epicenters shown on a map) don't fall right on the fault at the surface, but a bit to the west," said Graymer, who works for the United States Geological Survey (USGS) in Menlo Park.

"The creep on the fault there is slowing as more than half the slip heads off onto the Calaveras Fault to the east and the fault transitions to a locked fault to the north, generally around San Juan Bautista," Graymer said. "Small swarms are not uncommon on creeping faults. The theory that I have heard is that they reflect stress-release on a small 'stuck' patch of the otherwise creeping fault. They are not necessarily a harbinger of a larger quake, though the size of a possible future quake would be related to the size of the stuck patch and whether the 'locked' part of the San Andreas to the north got involved."

"I can't see anything in the 3D distribution of the relocated hypocenters that suggests these are related to a large stuck patch, but one can never rule out an earthquake," Graymer added.