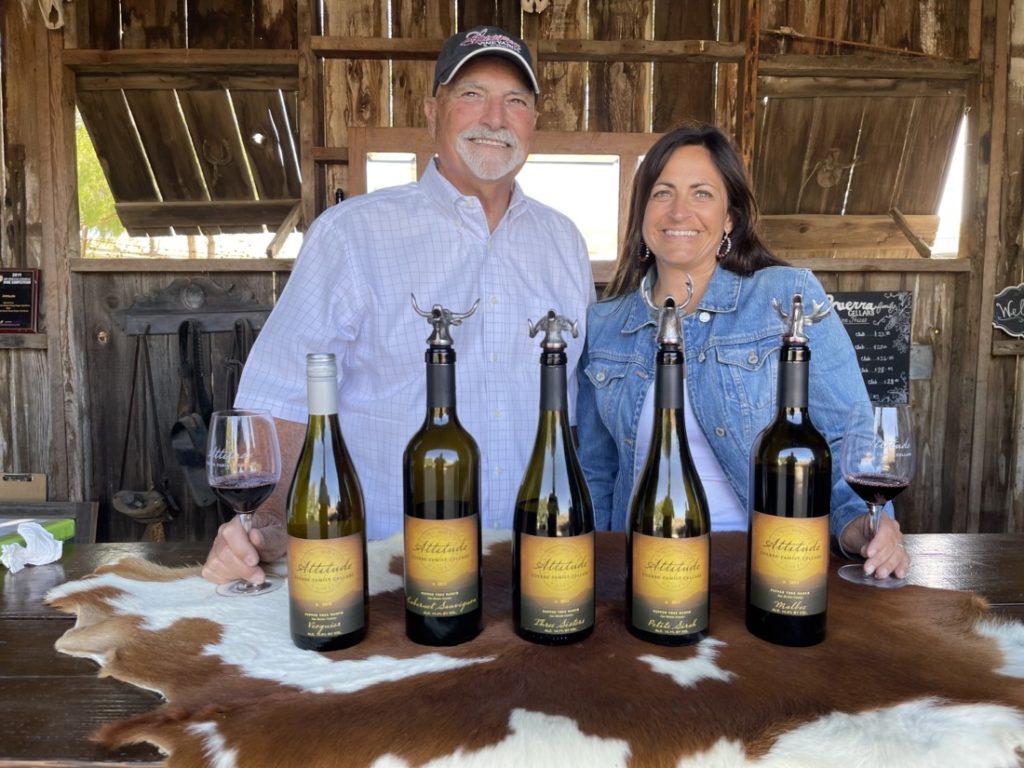 Al Guerra and Danielle Nino in the tasting room. Photo by Robert Eliason. 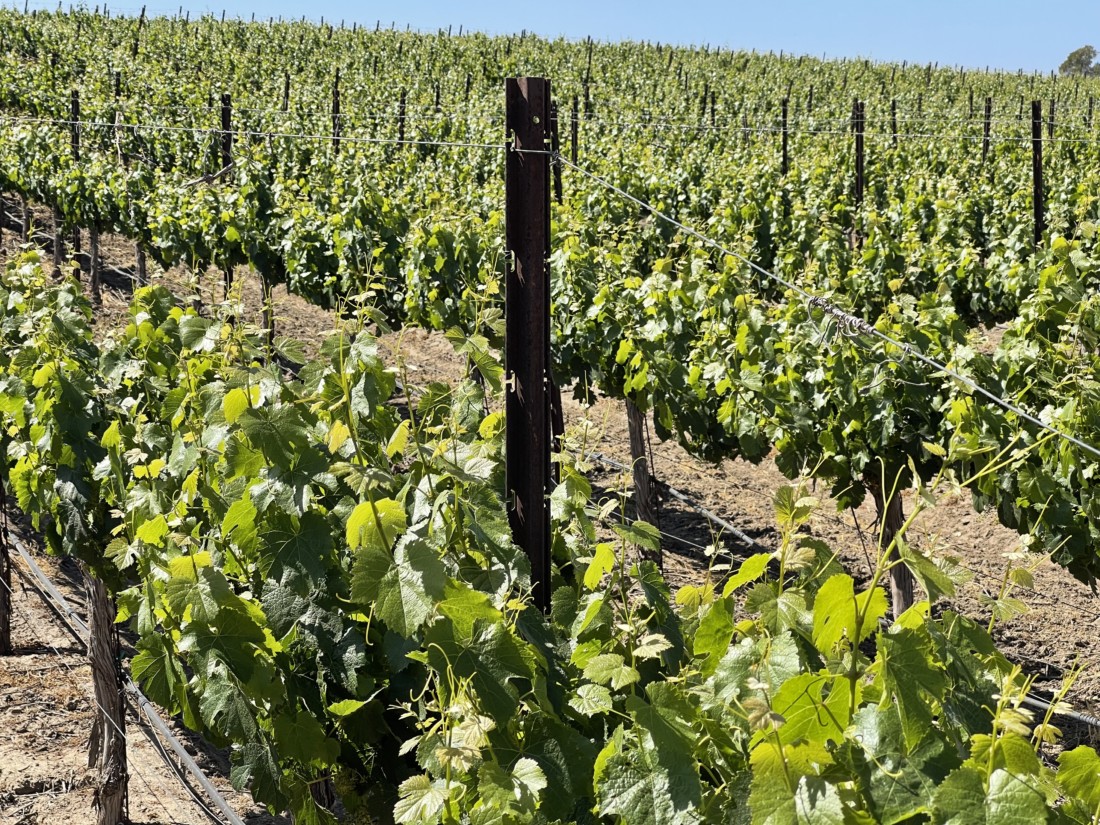 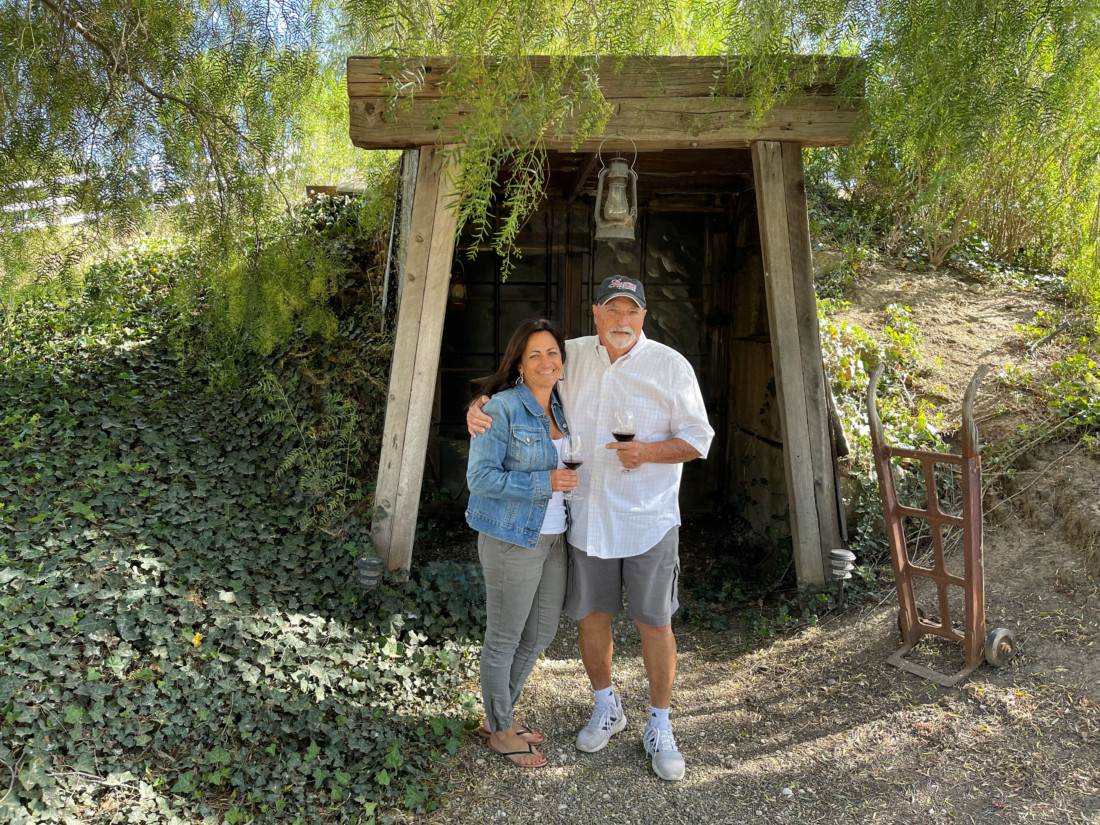 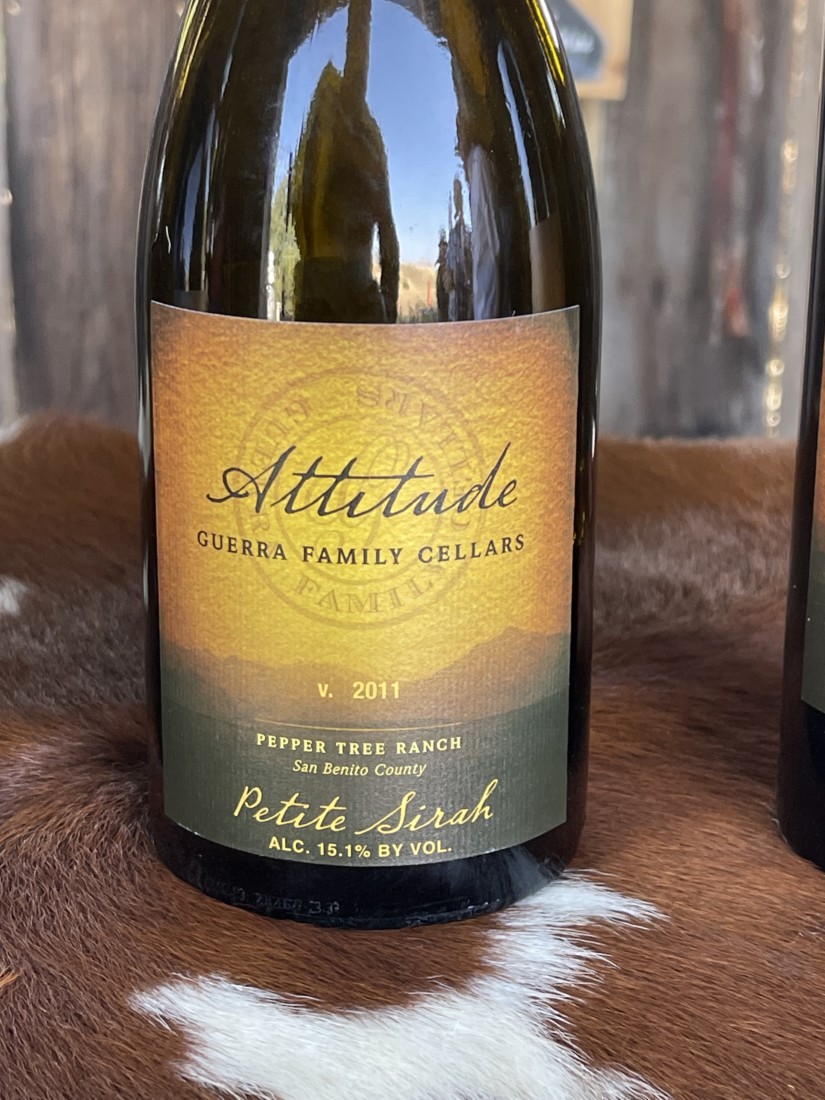 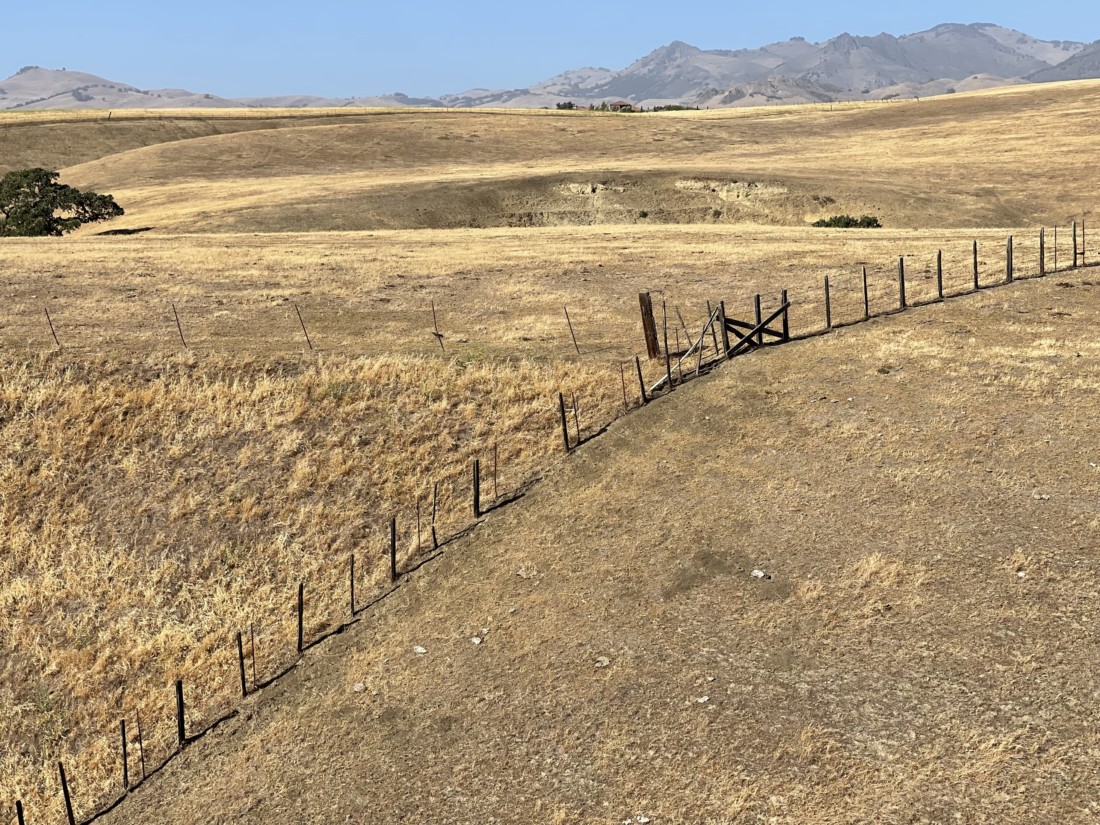 The view from the tasting room. Photo by Robert Eliason.
×

Though Guerra Family Cellars planted their first vines at Pepper Tree Ranch relatively recently, starting with malbec, petite sirah, and viognier in 2006, the winery is firmly grounded in a local agricultural tradition that stretches back to the 1920s when Antonio Guerra with his son Frank and his brother Carl settled in Hollister and began farming.

The main family business was farming and shelling walnuts, but Antonio started a small winery which he continued to operate until his death in 1941. Frank’s son Anthony came home in 1947 after serving in World War II, and the family began the Guerra Nut Shelling Company, one of Hollister’s most successful businesses, employing over 100 people.
The winery began as a tribute to Anthony, who had been president of the company and died in 2003.

“Dad had a passion and dream of being in the wine business,” said Anthony’s son Al Guerra. “He was our mentor and the guy we followed, so when he passed we said ‘Let’s try what dad wanted to do.’ A friend of his dug a well for us and we were able to plant 20 acres. We went into it as a fun thing for our dad and to see why he wanted to do it.”

Guerra currently oversees the winery and has the relaxed air of someone who has discovered the pleasure his father was seeking, as he chats with visitors, a glass of wine in hand.

“We didn’t try to figure out for ourselves what to do,” Guerra said. “We got a lot of advice from our neighbor, Frank Leal. He helped guide us and used some of the ideas of where we didn’t want to go or were too afraid to go. Lucky our family has a very good business that can allow us to try some other thing.”

Leal helped choose the varietals based on vines similar to those he grows at nearby Leal Vineyards. All of the wine production for Guerra is done at Leal, almost exclusively with Pepper Tree Ranch grapes.

“I don’t want to say it is a hobby, but it is kind of a hobby,” Guerra said. “Our grape production is not small, but what we produce to sell is small. We want to stay small—that’s what we feel our niche is right now. We might produce 600-700 cases of viognier but we sell less than 200 ourselves. The rest of the grapes get sold to other winemakers.”

Guerra does not market the wine through the usual outlets, instead selling only through their winery, their wine club, and online ordering through their website. Wine club members receive  just eight bottles a year, partly because Guerra does not want people ending up with “closets full of wine from all the wine clubs they join.” The winery has twice-a-year release parties and offers a 30% discount to members.

They also sell their wine at their Hollister Concerts venue, a grassy amphitheater located a short walk from their tasting room. The summer concert series features cover and tribute bands and Guerra bills the shows as “the only concerts with ‘Attitude,’” a reference to their wine label.

There are five concerts scheduled this year starting on June 19, with performances by Fortunate Son and Caravanserai, which are Creedence Clearwater Revival and Santana tribute bands.

One unique feature of the winery is that the reds tend to be held back from early release, allowing customers to buy wine that has aged a bit rather than having to cellar the wines themselves.

“You don’t have to get a case and sit on it for six years before you can drink it,’ Guerra said. “The wines are not filtered, so there is still some grape in there to keep it from dying, which helps the wine last.”

The winery is located on the edge of Hollister. As you turn off the always-busy Fairview Road, the approach to the winery down John Smith Road twists and turns through the tranquil countryside. It’s easy to think you have wandered in the wrong direction, but there are signs posted to assure you that you are going the right way.

The tasting room is a small barn surrounded by a lawn and tables. The scene before you is pure San Benito County beauty: rolling hills and distant mountains. I met Guerra and his daughter Danielle Nino there to taste the five wines currently being offered.

2019 Viognier ($32) “If you grow chardonnay, you are just one of a million chardonnays,” Guerra said. “But since this was not going to be our main way of making a living, we wanted to be a little bit different. This is our only white and it has been fun for us to see that not many people around here are producing viognier.” The wine is fermented in stainless steel, then transferred to French oak barrels. The aroma is rich and full of fruit with a hint of a sour note. The wine itself is refreshingly light and slightly sweet in the finish. It lacks the metallic tones found in some viogniers, making it a fine cheese-and-prosciutto kind of wine, perfect for snacking on a hot summer day. It would go well with foods prepared simply, like salmon with a lemon garlic cream sauce.

2015 Cabernet Sauvignon ($40) This is the inaugural vintage of this wine, from the last grapes planted in the vineyard. “We went with the other varieties first, then decided to try a cabernet,” Guerra said. “You have to have a cabernet. I like it and sometimes at the end of the day that is what matters. How else can you stand behind it?” The wine is a deep, deep red with an aroma that leans towards berries and strong tannins. “This one is a little drier and woodsier than some of our wines,” said Nino. “It is one of my favorites, good with food.” It’s a supple wine with an elegant finish. The dryness would allow it to compete nicely with foods with bolder flavors, like pasta with red sauces or grilled spicy sausages.

2014 Malbec ($40) “This wine is a bit different,” Al said, “But we found out malbec grows well here. Our first malbec won best of class in the San Francisco Chronicle wine competition, which we thought was impressive.” A French grape more associated with Australian winemaking, this malbec has many of the same notes as the cabernet, but more toned down and more subtle to the palate. The fruit comes through more clearly, with hints of tobacco and dark chocolate. “A lot of people come for our malbec,” said Nino. “It has the strongest aroma of our wines, very smooth and unique.” What struck me about this wine was its gentle versatility—it is a great approachable red wine. If I were bringing a bottle of wine to dinner with no clue as to what was being served, I would have confidence in this wine as a good choice.

2013 Three Sisters ($38) This is Guerra’s only blend, made up of 63% petite sirah from Guerra’s vineyard, with 28% grenache and 9% sirah grown at Leal Vineyards. “We wanted to have more than four wines to pour and since we had the sirah and Leal had the others, we went with that. Blends like this tend to be named ‘three something.’ The Three Sisters mountains are in the distance behind us, my son has three sisters, and a grandson with three sisters. You have to have some lore, they told us, so that is the story.” Of the three reds, this is the lightest and fruitiest, with vibrant flavor tones that excite the mouth. I would have loved to have a big plate of spaghetti to go with this, with a rich red bolognese and some garlic bread. “This is an afternoon red wine for me,” Nino said. “It is a go-to for me that you can relax with at 2 o’clock with appetizers or snacks.”

2011 Petite Sirah ($38) Deciding on a bottle to take home was a tough call. It was a coin toss between this and the Three Sisters blend, but the sirah won in the end. It’s a slightly bold wine that still maintains a smoothness that holds the flavors together. The balanced acidity and tannins join with blackberry and black pepper tones to produce a remarkable wine that would be appropriate for special occasions or just to sip in the evening with friends. This is an example of Guerra’s instinct in releasing a wine after a perfect aging time—you could cellar this wine for a bit longer, but there really is no need to do so. I would happily serve this with prime rib and grilled mushrooms but it would be delicious with ravioli in an alfredo sauce with fresh ground pepper. 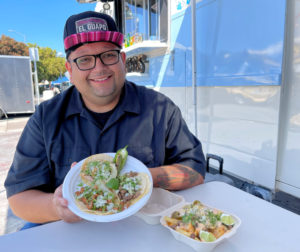 Local ingredients and a flair for regional cooking highlight his approach to Mexican food. 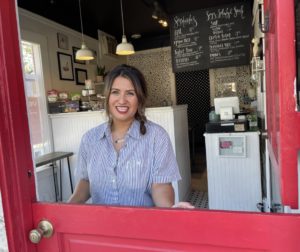 This small cafe in a small town offers well-crafted sandwiches and luncheon fare. 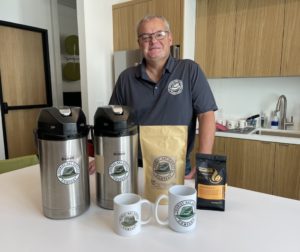 Tourist Hat Coffee expands to include a cafe and roasting in Murphy’s. The Hollister coffee company continues its local distribution.