Rice wine is no longer just for Japanese restaurants. 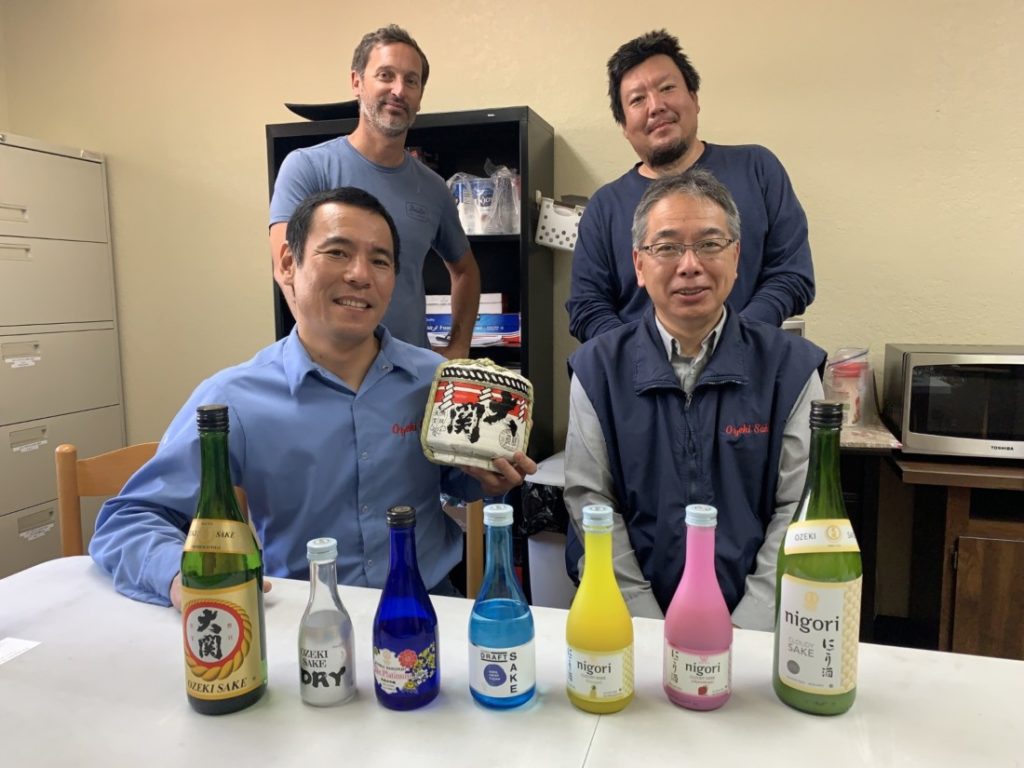 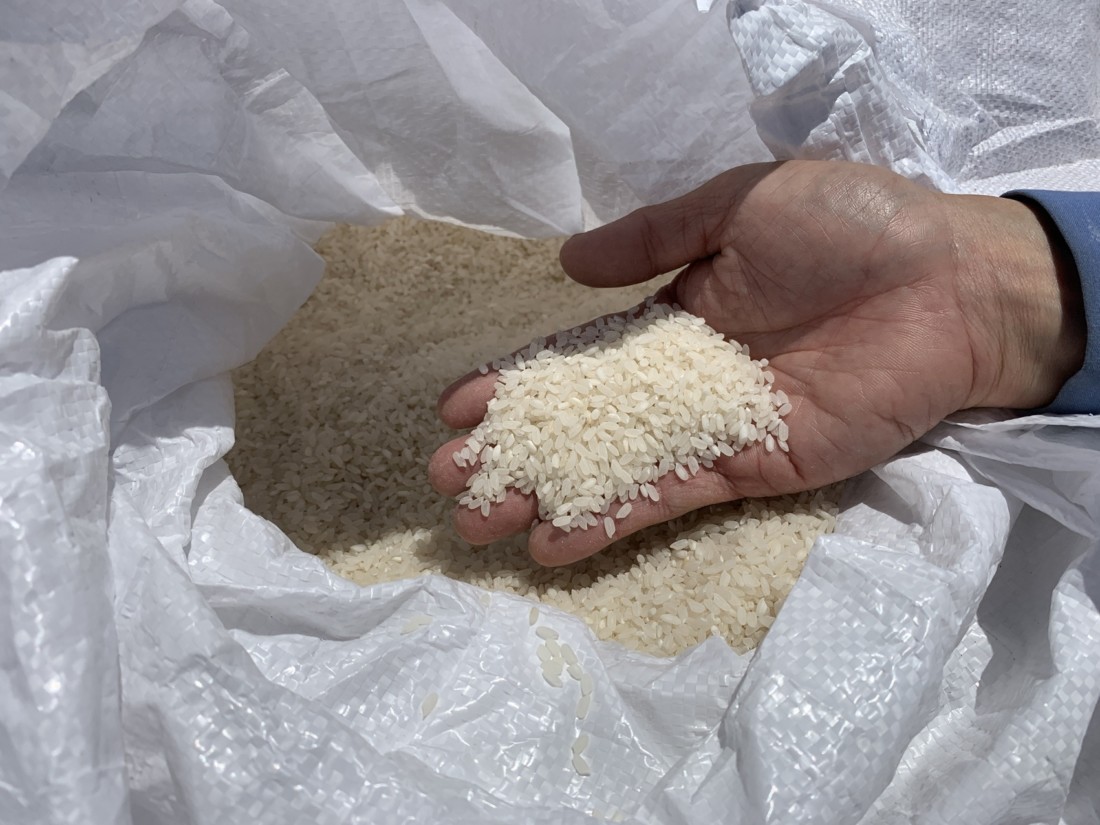 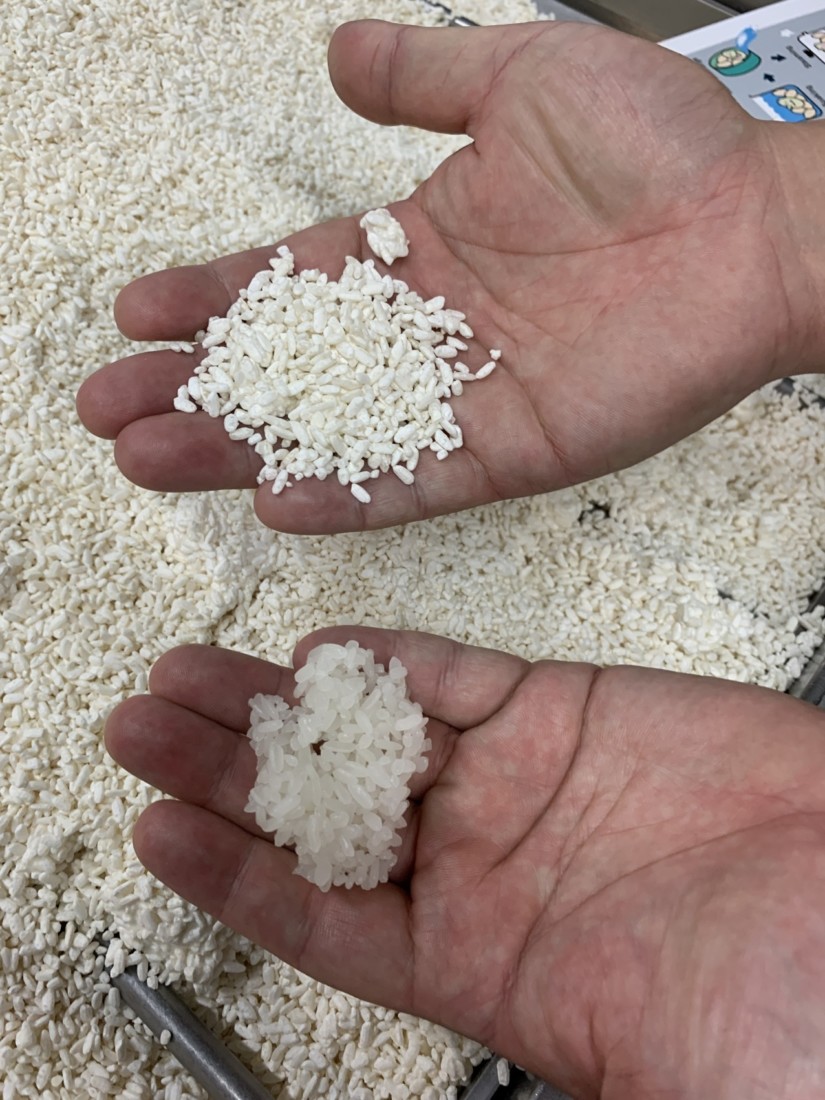 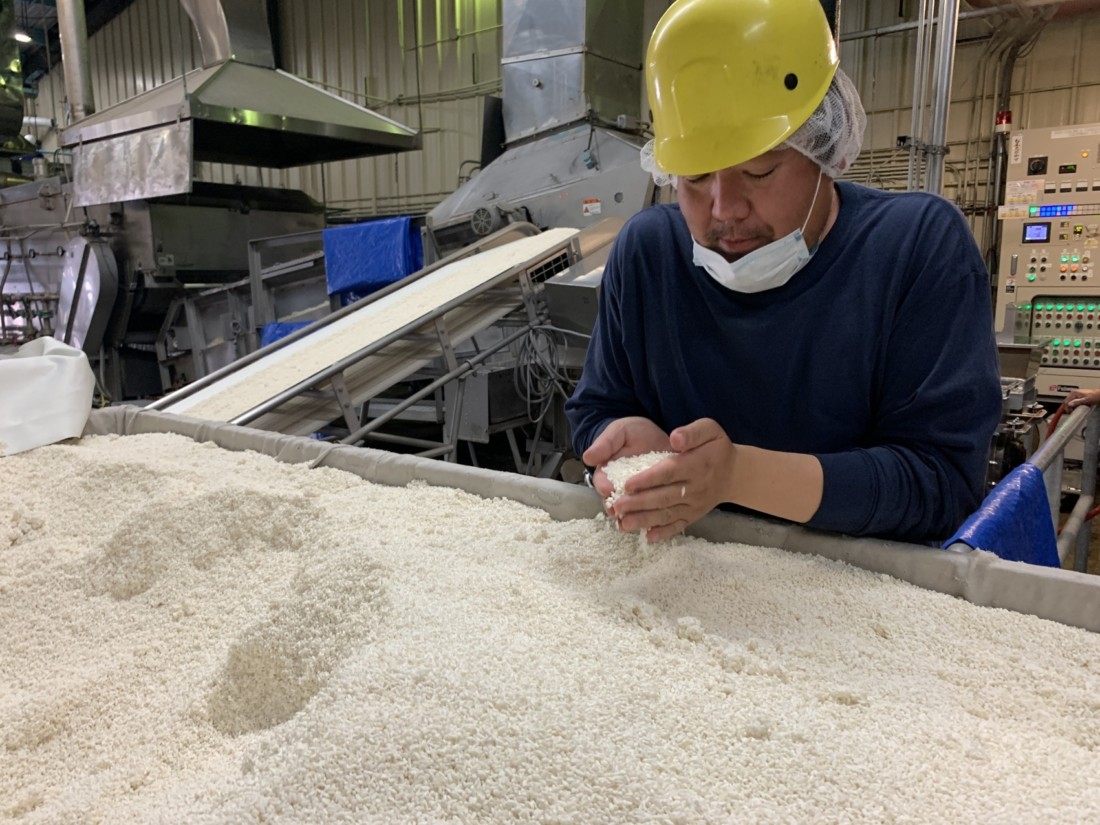 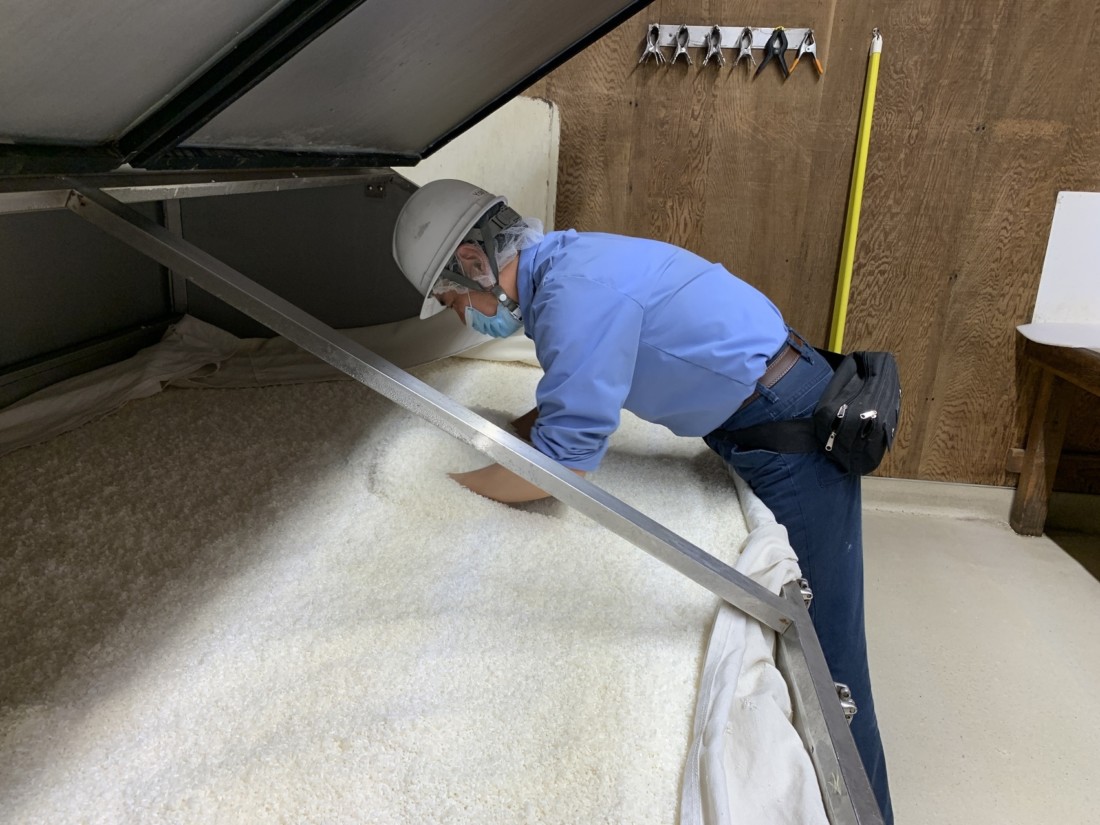 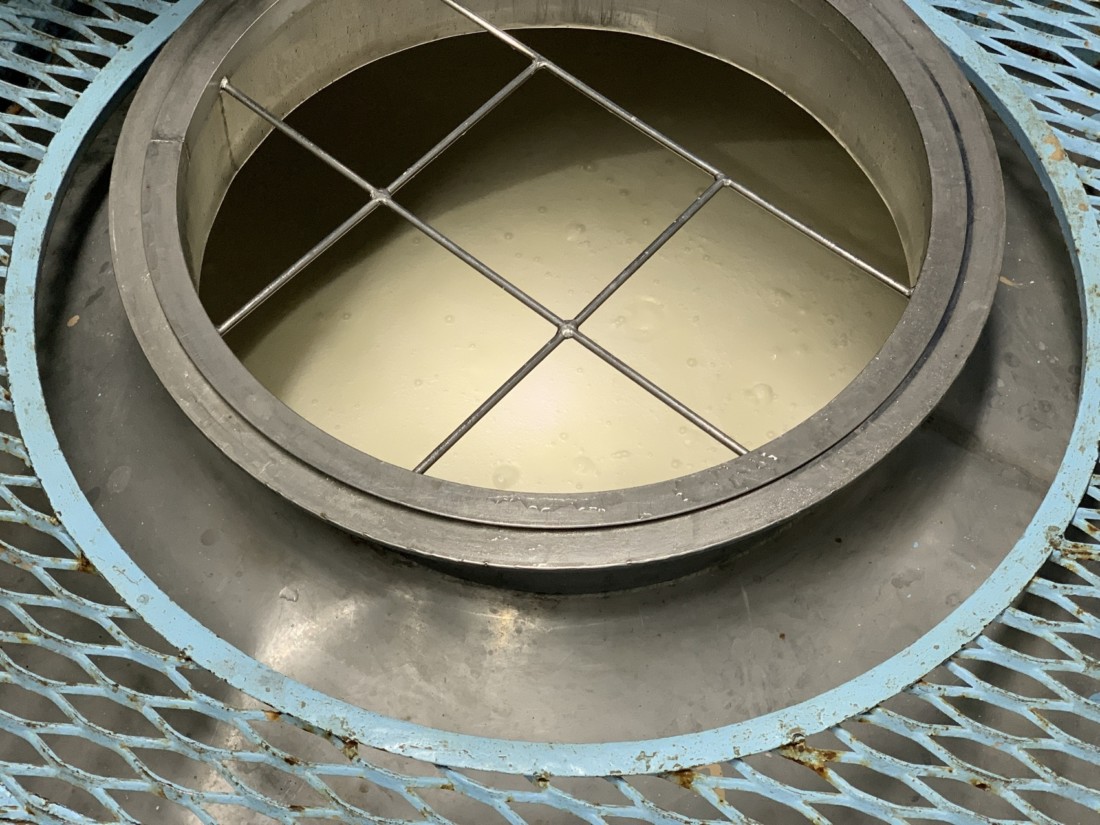 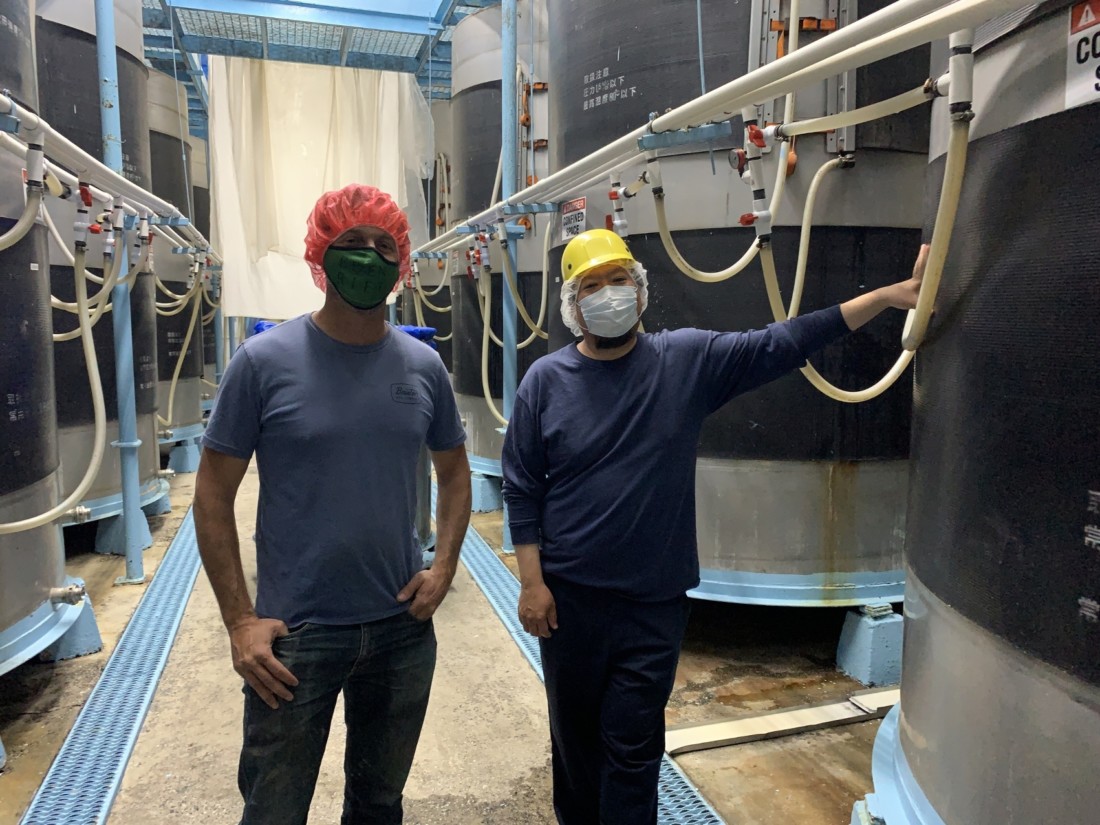 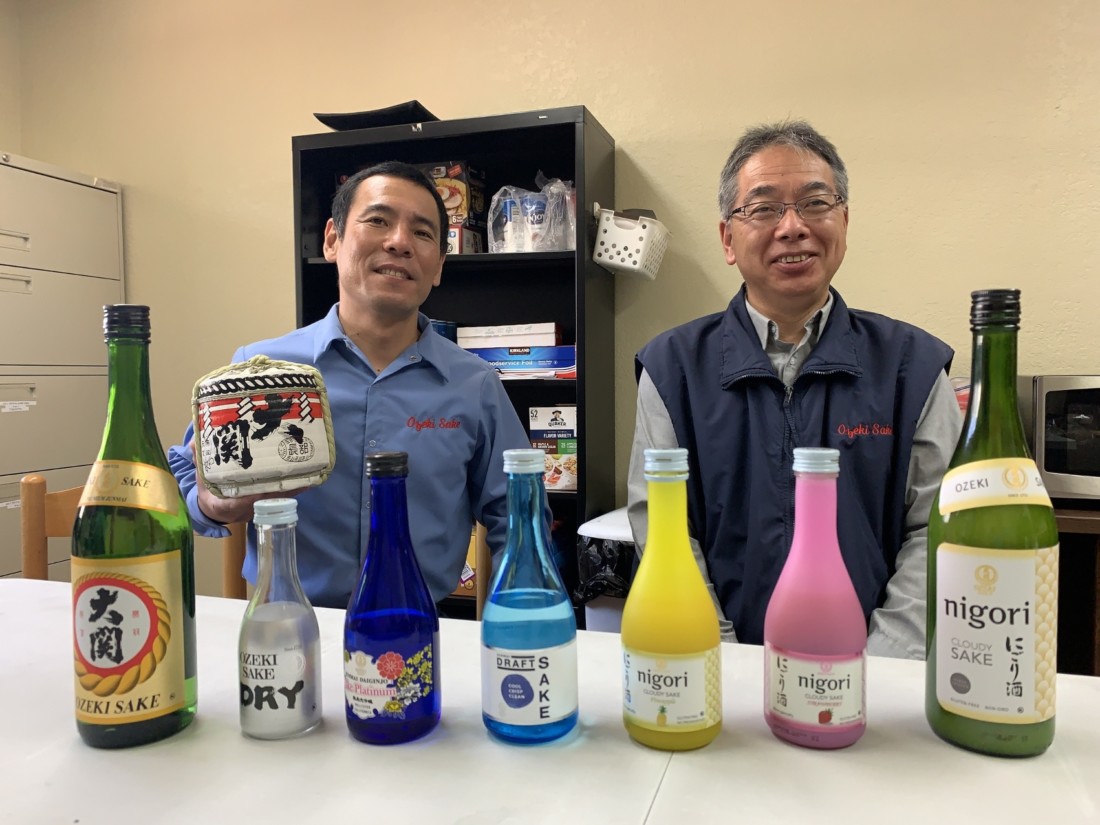 Sake wine is an instantly recognizable symbol of Japanese culture and is enmeshed in Japanese daily life. Like champagne, it’s part of weddings and celebrations. Like sacramental wine, it’s involved in religious rituals and devotions. Like wine and beer, it’s used as an everyday beverage with meals, desserts, or just on its own.

First brewed 1,300 years ago, the simple ingredients—rice, water, yeast, and mold—are prepared, processed and combined in different ways to create a wide spectrum of nuanced flavors. This small miracle of wine brewing is performed six days a week at Ozeki Sake in Hollister.

Seiichi Matsuda, procurement assistant manager at Ozeki Sake, explained that sake does not survive international travel very well and the parent company, Ozeki, founded in 1711, decided to find a location in the United States. Hollister was chosen based on the quality of its water supply and proximity to agricultural areas, though today most of the rice comes from farms near Sacramento. This facility, founded in 1979, is the oldest sake brewery in the United States.

Matsuda invited me to take a tour of the brewery. Eden Rift winemaker Cory Waller joined me on the tour.

Our tour began simply enough, outside of the main building, standing in front of dozens and dozens of massive sacks of rice. It’s short-grained rice, similar to that used in Japanese restaurants for sticky rice.

The process begins with milling off the outer layers of the rice, a critical stage for sake making that helps reduce the grain’s starch content.

“Our polishing machines are something that makes us unique,” Masuda said. “No other sake makers have one. It gives us great control over how much the rice is polished.”

After polishing, the rice is given a quick wash, no longer than 10 seconds, to remove any dust. Following the wash, the rice is soaked in water, with the time and temperature depending on how much the rice has been polished. The more polish, the less soaking time. The finest polished rice might soak for 10 minutes. Less polished rice intended for standard sake might soak overnight. The rice is then steamed for half an hour and cooled.

Following cooling, “things get tricky,” Matsuda said. Some of the rice will become koji rice—rice that will be treated with a type of mold to create a starter for fermentation.

“We spread the rice with koji mold and we let it rest for one or two days in a temperature-controlled room,” Matsuda said. “This breaks starch down to sugar. Some of the rice will become shubo rice, which eats the sugar and poops alcohol. The starch-breaking process is why making sake is more like making beer.”

Matsuda opened the door to the koji room for us but we were not allowed to step inside, so as not introduce other bacteria to the mix. The room is hot and humid like a sauna to encourage mold growth, with an intense steamed rice smell. The rice is churned a few times a day by hand to keep the mold circulating in the mixture.

The steamed rice, koji rice, and shubo rice are mixed with water and put into fermentation tanks. The mixture, called “moromi,” is fermented for 20 days in 3,500- or 7,000-gallon tanks. Within a week, the sake mix has become a bubbling cauldron of gas and decomposing rice. Waller mentioned that higher sugar content wines, like roses and sauvignon blancs will also bubble in a similar fashion during fermentation. He also suggested that I not poke my head into the tank, as the buildup of carbon dioxide given off by the fermentation process would knock me out quickly.

After 20 days or so, the mixture is drained into cloth bags and pressed, squeezing the sake out of the moromi. The waste, or “kasu” in Japanese, will end up as food for farm animals.

This gave us our first chance to taste fresh, unpasteurized sake, straight out of the storage tank.

“You can still taste a lot of the rice in there,” Waller said. “You still get a bit of the starchiness and the alcohol is high. And you get some of the yeasty flavors still.”

In tasting it, I noticed a really nice aroma but the flavor was raw and the alcohol packed a punch, measuring an estimated 19%. The final processes, including fermentation and blending, will reduce that to between 14% and 16%. The sake is packaged on-site, in bottles ranging from 150 ml through 1.5 liters, as well as 1.5-liter casks and 19-liter boxed versions for bars.

Ozeki had to slow production during the pandemic, and now that restaurants are reopening, it’s once again fully staffed and just able to keep up with orders.

After the tour, we had a sake tasting where Matsuda, Waller, and I were joined by Ozeki Sake President Toru Ikemasu and production manager Yoji Ogawa.

Here are the sakes we tried.

Draft Sake (14.5% ABV, 70% polish rate). Ikemasu referred to this as “mainstream sake.” Usually, sake is heated twice during the brewing process, once before aging and once before bottling. Draft sake is only heated once, “It’s smooth and I like the texture too,” Waller said. “It has a kind of minerality and a fruity aroma.” The aroma is very striking, almost a banana scent, and the rice flavor is subtle throughout. The dryness of the sake would appeal to people who are accustomed to higher alcohol levels, as you get the flavor and smoothness without a lot of sweetness. This would be a good sit-down beverage at a bar and perfect to serve before a meal at a party.

Ozeki Dry Sake (14.5% ABV, 70% polish rate). When the company was founded in 18th-century Japan, “Ozeki” was the highest rank in Sumo wrestling. Of all the sakes we tried, this one to me was the winner. Waller noted that this one is a little sweeter and that the flavor of the rice comes through a lot more than in the draft sake. And aftertaste, with hints of roasted rice, lingers and would compliment sushi or even a risotto dish. Sake takes on distinct characteristics when served at different temperatures, and slightly warming this one to about body temperature mellows and refines the taste. Waller mentioned that heating the sake intensifies the alcohol taste and deepens the rice flavor.

Ozeki Sake Premium Junmai (16% ABV, 70% polish rate). Ikemasu recommended this as the best choice for people just starting to taste sake. “Junmai” means “pure rice,” and the slightly raw rice flavor comes through well. For beginning sake drinkers who are used to wine, one obstacle is going from the familiarity of the flavor and characteristics of grapes to the more subtle flavor and textures of rice. The Premium Junmai is more full-bodied and a bit sweeter, something you would expect in a sauvignon blanc, but the rice flavor takes it in a different direction immediately. Savory and crisp, this obviously would go well with any Japanese food—a bottle of this and some tempura vegetables would make for a great start to a meal. But it would also go nicely with grilled flank steak.

Ozeki Sake Platinum (16% ABV, 50% polish rate). This is “Daiginjo sake,” the highest quality. The polish rate means that only the center of the rice is being used to produce the sake, making the taste much purer and cleaner. It is more light-bodied than the premium, with a good medium dryness. The tone of this sake is closer to fine champagne, though without the carbonation. Waller compared the rich flavor to tropical fruit, and the aftertaste is pure fruit that tapers off nicely. Matsuto referred to this as “Kumpai sake,” a toasting drink serving the same function as champagne. I would not serve this with a meal and I would keep it to champagne uses—sipping, toasting, enjoying with desserts. You do not want to hide or disguise the elegant flavor.

Nigori cloudy sake (14.5% ABV, 70% polish rate). Cloudy sake is one that retains some of the finest of the rice sediment that ordinarily is filtered out before bottling. The resulting mix is creamy, sweet, full-bodied and milky white. It does not have any lingering aftertaste and the rice flavor is similar to the tropical flavor of coconut milk. For anyone considering trying sake, this is a good entry point. It should be served chilled and would go well with any dessert. It would also complement very hot foods like spicy grilled shrimp or Szechuan chicken.

Nigori pineapple cloudy sake (9% ABV, 70% polish rate) and Nigori strawberry cloudy sake (9% ABV, 70% polish rate). Both of these sakes are pure fun. Matsudo said these were designed to attract people unfamiliar with sake. Definitely dessert wines, they taste like rich melted ice cream. Again, served very chilled, these would both be nice surprises at a dinner party where guests might be looking for a fruity mixed drink. The strawberry and pineapple do not overwhelm the delicate rice flavor and the lower alcohol percentage is more in the range of a casual white wine. 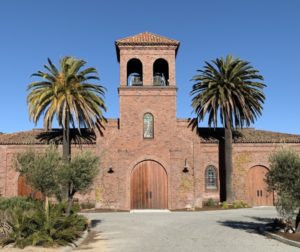 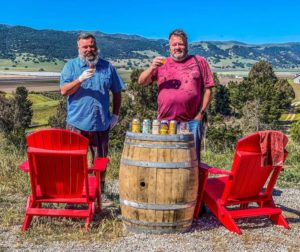