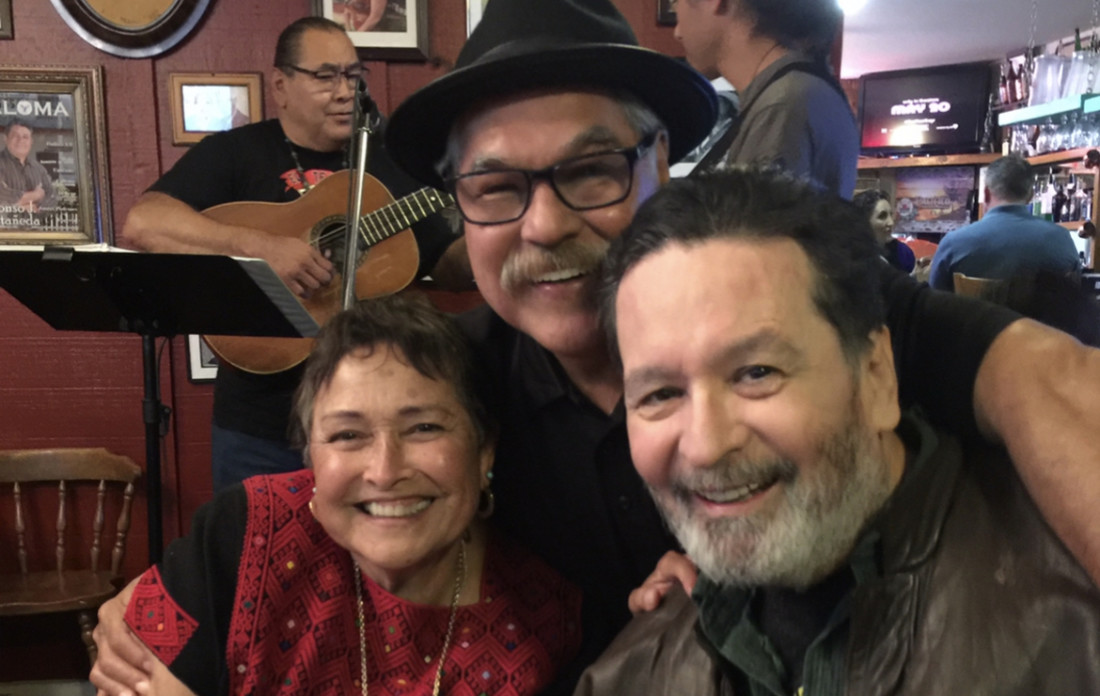 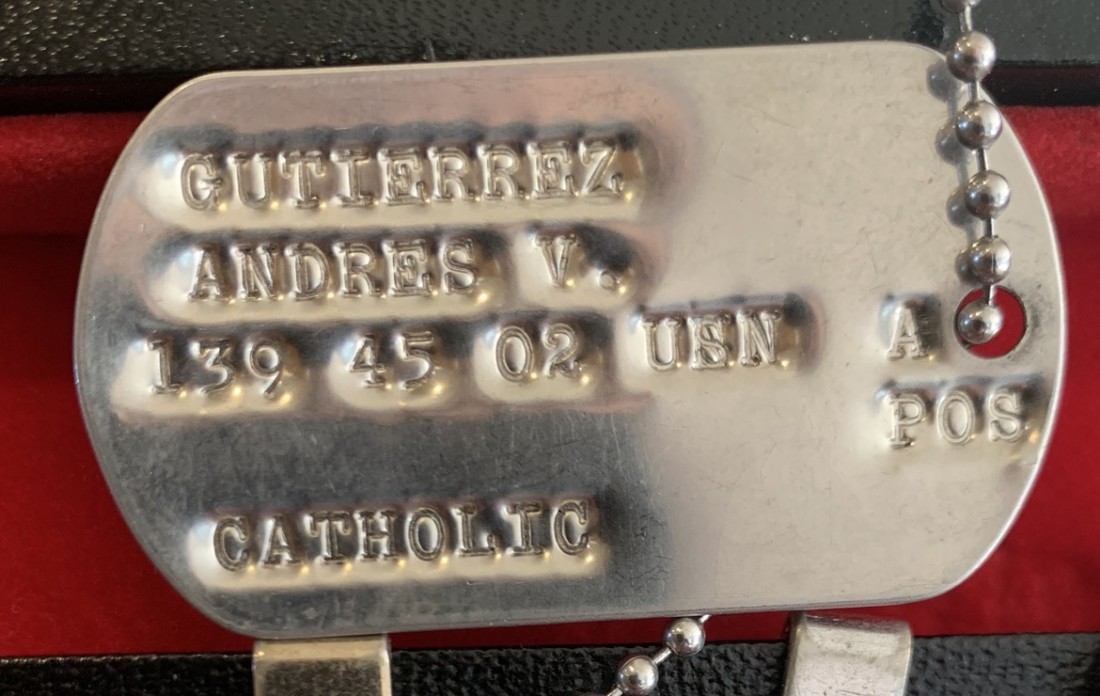 Andres Gutierrez with the Ladies of San Juan. Photo courtesy of Lupe Valdez.
×

“On behalf of the entire creative familia of El Teatro Campesino, we lament the loss of our dear beloved brother in the arts, Andres, and celebrate the many contributions he brought into our lives with his passionate humanity, wit, humor, intelligence and commitment to the Chicano movement.”

So began the heartfelt tribute from Luis Valdez, founding director of El Teatro Campesino, for Andres Valenzuela Gutierrez, 74, one of the shining lights of that company. After a lengthy struggle with post traumatic stress disorder, Gutierrez died from COVID-19 on July 17 at the Veterans Administration Hospital in Palo Alto.

Guiterrez first came to San Juan Bautista in 1972, after serving as a medic in the Vietnam War followed by a few years at San Diego City College and UCLA.

“We had a summer workshop at the theater at Jardine’s,” Valdez said. “He came up for the summer from San Diego, went back, and when he was done with his studies down there he returned to us again.”

Not content to be just an actor, Gutierrez began taking on more work in the background.

“He was very intelligent and very disciplined in his own way,” Valdez said. “It was just a question of his finding his own role in the company.”

Those who knew him described him the same way: charming, funny, talented, nurturing, and with a huge sense of compassion and humanity. They also agreed on one other quality: Gutierrez was a pack rat.

“He had a mania for collecting, with a great sense of taste and artistry,” Valdez said. “He started saving stuff that nobody else would think to save and before we knew it we had a collection that became our archive. He also became our publicist with a real knack for media.”

He started collecting articles, interviews, posters, and photographs, then filing them. A large part of what he gathered is now the basis for the Teatro archives at UC-Santa Barbara.

“Andres was a natural Teatro person,” said Phil Esparza, a long-time Teatro associate and board member. “He kept track of what we had gathered before he got there and then collected everything he could find.”

When Valdez was working on his play “Zoot Suit,” which he eventually took to Broadway, Gutierrez was there serving as one of the publicists and ended up getting publicity for himself as well.

“When we went to New York for “Zoot Suit,” I roomed with Andres,” Esparza said. “We had an office on the top floor of Sardi’s. At that time we were also involved with a project to create a national presence for Latinos. They were doing a national campaign of different faces of Latinos, showing how expansive the whole Latino diaspora was. I nominated Andres and he ended up being the Mexican-Chicano face of this campaign—50,000 copies of that poster went out around the country.”

“He was on top of a lot of things for the Teatro,” said Rosemary Rosa Apodaca, longtime Teatro member. “That whole conversion of the Teatro building—he was the one who made connections and put people together and made sure the money was there. He was a mover and a shaker.”

On a more personal level, Apodaca said she admired his style and his kindness. “Andres gave the Teatro some class. He was always the gentleman, always well dressed and polished. Always thinking of how he could make somebody happy.”

Gutierrez worked in TV as well, on the show “El Amanecer” on KCBA in Salinas as well as hosting his own show where he reviewed recent movies.

By that time, Gutierrez was feeling the first stages of PTSD, which the Department of Veteran Affairs estimates affects about 30 out of every 100 Vietnam veterans.

Though he started to fade from active participation, Gutierrez was there for succeeding generations of El Teatro Campesino members. David Alvarez joined the group in 1997 and met Gutierrez at one of the Christmas shows.

“He was a guide and an inspiration,” Alvarez said. “He wasn’t producing or managing anymore, but he was always there, in the hallways, in the archive. He was a fixture.”

Gutierrez was a welcome mentor. “When I look back at my years at Teatro, I don’t think it would have been as fulfilled without Andres being there,” Alvarez said. “I didn’t know much about Chicano history and he guided me through it and brought perspective to me. He helped guide me into a better understanding of myself, what it is to be a Chicano, and what it is to be an artist as well.”

Alvarez remembers his generosity. “He used to get clothes at the thrift stores and he would organize them in sizes to give to the farm laborers. I was 16-17 and he’d pick out things for me. He’d put a shirt or pants up against me and say ‘that looks great!’ He wanted me to feel appreciated and he wanted me to appreciate myself as well.”

For another Teatro veteran, Noe Montoya, Gutierrez was like a big brother.

“He took me under his wing, I was a kid out of high school when I joined the group,” Montoya said. “We shared a house together, toured together.”

Gutierrez originated the role of el Hermitaño (the Hermit) in the first production of “La Pastorela.” As he continued to suffer from PTSD, he began to recognize the signs of it in others, including his neighbors Laynee and Sonne Reyna.

“Andres told Sonne and me that we needed to go to the VA clinic because we had PTSD,” said Reyna. “And I said ‘what’s PTSD?’ And he said ‘Go there and they will help you.’ He was responsible for getting us well, me from when I was a medic in the Korean War, and Sonne from his service in Vietnam. He cared for everyone. It was one of the great things about him.”

Gutierrez’s tour of duty in Vietnam slowly overwhelmed him and the tragedy of the experience became increasingly hard to cope with.

“He had seen terrible action in Vietnam,” Valdez said, “and he never wanted to talk a lot about it. He was a bit older than the rest of the crew and had lived a life they could not understand.”

His friend and caregiver, Lola Viera, remembers him talking about his experiences in the war.

“He talked about when he was a medic and how he would help the sick Vietnamese too,” she said. “He took care of them as much as the soldiers. He even learned the language and was still able to speak it years later.”

Viera said Gutierrez’s compassion with the civilian population was not appreciated by his fellow soldiers.

“They used to tease him and go after him for caring about them,” Viera said. “They would try to shame him. He really cared about the people there and it shows how special he was.”

As time went on, Gutierrez’s PTSD became too severe to allow him to participate in the theater company that had been so much of his life.

“He kept up our archive until he could no longer do it,” said Valdez. “He began to exhibit a restlessness that motivated him to keep changing displays and exhibits, changing pictures and posters. He closed himself within the archive, so that at his desk he was hidden by files he surrounded himself with there. It took years, 20 years of his activity with us, for his decline.”

Unable to keep working, Gutierrez spent his time walking around San Juan Bautista. Barbara Gonzalez, owner of Visions, remembers “He’d go around perfectly dressed, with a huge smile, greeting visitors, bowing, and saying ‘Welcome to San Juan’ in that actor’s voice of his. It was a wonderful way for people to be greeted into our city.”

He particularly loved Dona Esther’s, and could be found there almost daily, sitting at a small table near the register.

“He particularly appreciated that I named it after my grandmother and he loved being there,” restaurant founder Al Casteneda said. “He would make it a point to be there at six o’clock in the morning when I would first arrive. He would have coffee with me as I was getting things ready to open. He’d say “Here I am, your first customer!’ and I would say, ‘Yes, about five hours early.’ But that just became our thing and we both enjoyed that time together.”

“He had been coming here for 35 years,” she said. “He was a fixture here and he would come here almost every day. He loved singing ‘Happy Birthday’ to all the customers, that was his gig. He was such a sweet man and he loved making people happy.”

Even longtime friends who saw him at the restaurant would be greeted with him saying “you look familiar, do I know you?”

“Physically he was in great shape and he never lost his sense of humor or humanity,” said Valdez, “but his short term memory was gone. It was hard to watch because he was like a brother to me.”

Towards the end of Gutierrez’s time in San Juan, Montoya would often see his old friend at his favorite table at Dona Esther’s.

“By that time, he did not recognize anyone,” Montoya said. “We would be talking and he would say ‘What’s your name? Is this your first time in San Juan Bautista?’ But I enjoyed being there with him. Our conversations would be like two people meeting for the first time, but I felt it was a blessing because I was meeting him all over again.”

A few years ago, when he began to require 24-hour attention, Gutierrez moved to a care facility in San Jose.

“When I would go and visit him in the care home, we were dancing and singing and putting on a show for the people there,” Apodaca said. “At the end, I told him I had to go and he grabbed my hand and said ‘Oh, no, I am going with you.’ And it was like the old Andres, it was just him for a second.”

The end came when Gutierrez contracted COVID-19 and was transferred to the VA hospital.

Gutierrez leaves behind a community that loved him, respected him, and cared for him in his struggles. Everyone interviewed for this article used the same word to describe his finest quality: humanity.

In his tribute, Valdez offered the closing thought for his old friend: “Querido Andres, we love you and shall never forget you. God Bless your everlasting spirit!”