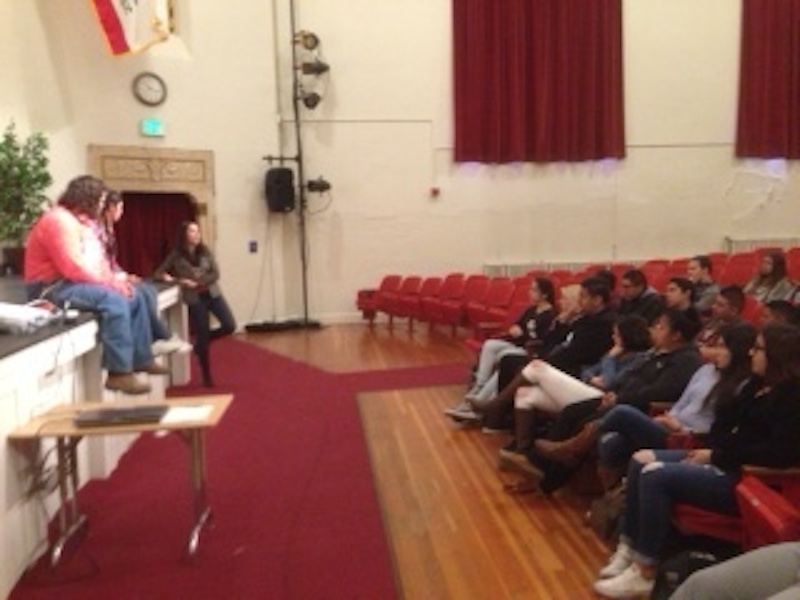 ETC’s Education Director, Christy Sandoval, began the one-hour presentation by providing students will an overview of the farmworker movement led by labor leader, Cesar Chavez, and ETC’s role within it.

Sandoval stated to the audience that El Teatro was “born out of necessity” during the 1965 Grape Strike as a medium “to educate farmworkers” about their plight and the efforts by Chavez’s union to improve their lives.

She then explained the various art forms developed by the theater company over its 50-year history, including the acto.

“The 10- to 15-minute play often features stock characters, like the scab, labor contractor, the grower-boss, and huelgistsas [Chavez supporters],” Sandoval said, adding that resourcefulness, physical comedy, and satire are some of its other distinguishing qualities.

After receiving the historical context and a mini-lesson on the acto, students were treated to a performance of, “Las Dos Caras del Patronicito” (“The Two Faces of the Boss”).

First performed on the picket line in 1965 and most recently at The Kennedy Center in Washington, D.C., the one-act play features two principal characters, the female, farmworker scab-wielding shears and the grower-boss dressed in a pig mask.

The boss upbraids his worker for wanting to improve her lot by supporting Chavez and the strike. He argues that it is his life, not hers, that is full of misery. Caring for famworkers and maintaining his lavish lifestyle is both expensive and exasperating, he argues.

The boss then demands that he and his worker switch roles.

Reluctantly, the worker takes the pig mask and is transformed from a meek, pliant, and exploited worker into a domineering, abusive, and shameless boss. Stripped of power, El Patroncito looks on with consternation until he is finally removed from the stage by a security guard hired to protect his fields from strikers.

“This piece put the esquirol [the scab] in a situation to make a decision," adding that, “when we put off the facade, we’re all human,” he said.

Senior Johnathan Zgragen, who attended ETC’s presentation with his Chicano History class, said he felt the production gave him a better sense of the power structure that permeated the fields during the '65 strike.

“I thought the performers did a really good job of showing how greedy the growers were. They [the growers] had no empathy, and money was more important than the well being of their workers,” he said at the conclusion of ETC’s visit.

What resonated with Zgragen’s classmate and fellow senior, David Perez, was the “passion” the actors exuded during the acto and how vital El Teatro was to the farmworkers’ struggle.

“When people think of the strike they think of picket signs, but often don’t realize El Teatro's role in it,” he said.