Following the June elections, Gregory LaForge and Omar Rodriguez continue on to the November ballot. 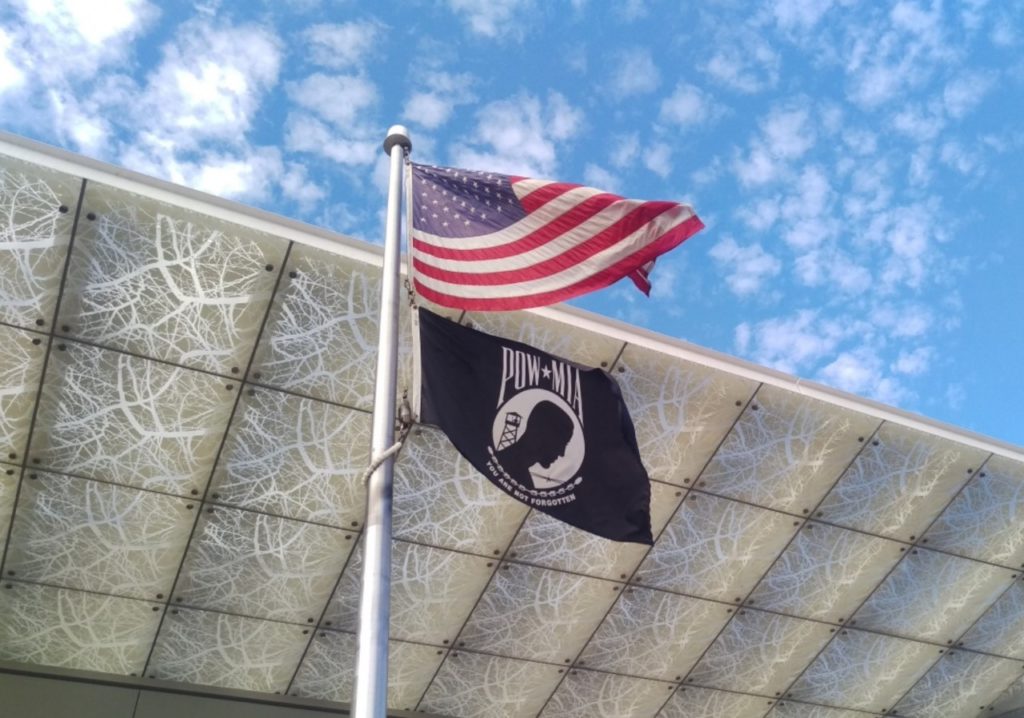 Flags outside the courthouse. A new judge will be elected to the San Benito County Superior Court after the November elections. Photo by Becky Bonner. With Harry Tobias retiring from his position as judge of the San Benito County Superior Court, No. 2, two county residents are running for his seat in the Nov. 6 election: Gregory LaForge and Omar Rodriguez.

Gregory LaForge has lived and worked in San Benito County since 1989. He has volunteered with organizations such as the Hollister Elks Club and Hollister Rotary.

“I have experience in the courtroom and have been doing it for 29 years,” LaForge said. “I think it is important to live and work in your county. I am already aware of how [the local courthouse] works. I won’t go in with blinders on.”

In addition to practicing criminal and civil law, LaForge has also worked as a chief deputy district attorney. He currently works as a criminal defense attorney and has the highest caseload per attorney in the county. In 2009, LaForge was sworn in as a member of the United States Supreme Court Bar by Chief Justice John Roberts.

Along with his legal expertise, LaForge said that “It’s most important when you are running for anything to have endorsements. I think your endorsements speak volumes.”

BENITOLINK: Why are you running for Superior Court judge?

LAFORGE: I want to see change; change in my professional life, change on the bench, and change that can streamline the process.

I’ve worked in all aspects in the judicial system, but being a judge. The closest I came was being appointed by the Hollister City Council to be an administrative hearing officer.

I also would like to possibly entertain creating a mental health and veterans court if fiscally sound. I think it is very important. There is currently a Veteran Affairs coordinator that comes to court. There’s a lot of PTSD with the veterans I represent, which leads to alcohol and drug problems.

What issues and/or areas are most important to being a Judge in San Benito County?

There is no case that will come to me that will be less important than the last. I am bound to the Constitution.

What obstacles and challenges does this position face?

The caseload is very important. The caseloads are unreal in this county, both criminal and civil. There are ways to streamline the cases that need to be done. Attorneys need to hash out cases before coming into [civil court]. They don’t need to waste the court's time when they can work it out outside of the court.

In the criminal court, we work it out in pretrial conferences before the case with the DA, defense attorney and the judge.

How do you plan on addressing these challenges?

I’ll have the attorneys do their work and job outside of the courtroom. They will know when they come before me they will need to have settled the case or set it for trial.

How do you intend to communicate and stay in touch with the constituents that you would represent?

I have a phone number and people can call me anytime. Bear in mind I can’t talk about a particular case.

My door will be open and people can always talk to me on the street. I have that happen now. It all goes back to working and living in the same community. You see someone in the court and then run into them at Safeway.

If elected, how long do you plan on being a judge in San Benito County? Do you have aspirations to serve at a higher level?

I have no aspirations to leave. I have been here since 1989. I love the community.

Omar Rodriguez was raised in San Benito County and hopes to serve in the community where he lives and is raising his son.

Crediting his farm worker parents for instilling in him the value of hard work, Rodriguez was the first in his family to graduate from college.

After launching his career in the county, Rodriguez left to work elsewhere after the recession. “I started my career as a San Benito County deputy district attorney, where I prosecuted everything from DUIs to serious assaults,” he said. “I loved working in San Benito County, but unfortunately the recession hit. I currently serve the public as an assistant county counsel, where I litigate a variety of cases on behalf of Santa Cruz County.” In recent years Rodriguez has handled cases involving business law, real estate law, civil rights law, government law, personal injury law and conservatorship and dependency law.

BENITOLINK: Why are you running for Superior Court Judge?

RODRIGUEZ: I’m running for San Benito County Superior Court Judge because I want to have a broader impact on my community by helping to keep it a safe and just place for our future generations.  I’ve done both criminal and civil law, and I’ve practiced in both state and federal courts before judges in Hollister, Monterey, Santa Cruz, San Jose and San Francisco. I bring experience and a deep appreciation of our county because I grew up here and am raising a family here now.  I am also running, though, because I want to bring a fresh perspective to the bench and implement some of the best practices I've witnessed in other courts to our county.

What issues and/or areas are most important to being a judge in San Benito County?

The most important part of being a judge in any county is following the law. This means not only abiding by what the law says, but also making sure to hear all parties and elicit the relevant facts so that they can be applied to the law correctly. This is a time-consuming process, and understandably many cases drag on for years, which creates heavy caseloads.

At some point, the axiom “justice delayed is justice denied” becomes true if cases can’t be resolved both fairly and expeditiously. I will bring the energy, drive and work ethic needed to resolve cases in a timely, lawful and fair manner in order to maintain the community’s faith in the judicial system. The community should not only receive justice, fairness and impartiality from the court system, but the community should expect it in a timely manner.

What obstacles and challenges does this position face?

How do you plan on addressing these challenges?

Resolving cases fairly and expeditiously requires hard work, and I want to make sure to do it in a transparent manner. If elected, I want to implement a system of issuing written tentative decisions in cases the day before oral arguments are held. These tentative decisions will notify the parties of what the key issues are and will focus oral argument so that time is not wasted on irrelevant matters. It will also help create clear records so that people know the bases of rulings.  Issuing written tentative decisions, instead of just oral decisions, will require more work of the judge, but it’s something I am excited to do in order to improve justice in our county.

How do you intend to communicate and stay in touch with the constituents that you would represent?

As a Superior Court Judge, I don’t necessarily represent people the way that a supervisor or assemblymember does, but if elected, I certainly want to stay involved in community events and am always open to feedback, although I have to be careful never to discuss the specifics of cases. Because I plan to issue written decisions, the work I am doing will be more readily available for people to see throughout the community.

If elected, how long do you plan on being a judge in San Benito County? Do you have aspirations to serve at a higher level?

If elected, I hope to serve as a San Benito County Superior Court judge for the rest of my career. I cannot think of a better way to use my legal experience than to serve the community that I grew up in and that gave me so many opportunities.