Sarai Acevedo and Katie Hoefling during the funeral

Two-day program at San Benito High School showed students the impact their decisions could have on family, friends and others. 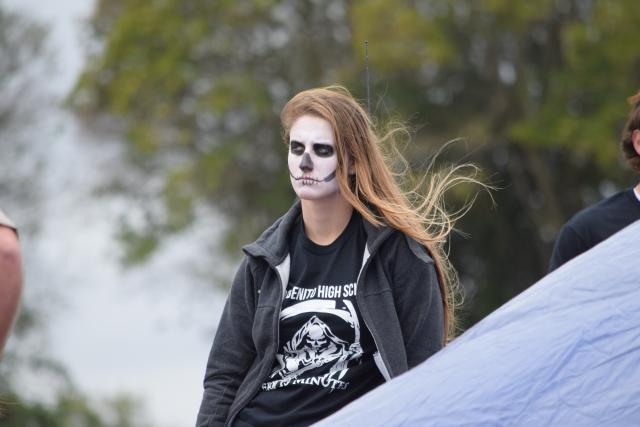 On Tuesday, April 21, students at San Benito High School got a reality check when 19 students from the senior class “died” due to alcohol-related car crashes.

The students really didn’t pass,of course. Rather, it was a simulation called “Every 15 Minutes” put on by California Highway Patrol.

Every 15 Minutes "is a two-day program focusing on high school juniors and seniors, which challenges them to think about drinking, driving, personal safety, the responsibility of making mature decisions and the impact their decisions have on family, friends, and many others,” according to its website.

Students who were chosen weeks in advance, attended their zero block, and/or their first block classes before a Grim Reaper, who was dressed head-to-toe black and carried a metal scythe, walked into a classroom every 15 minutes to whisk them away, quickly and quietly. After the student and the Grim Reaper left the classroom, a volunteer from the Every 15 Minutes program would place a sash with the student’s name and a black rose on their desk as a memorial.

A CHP officer then walked into the classroom to read a short obituary about the student, which included information about their past, and details on their future aspirations. While the obituary was being read, the remaining students had reactions that ranged from being shocked, sad, confused, and even distraught. It caused the atmosphere of each classroom to change.

During their fifth block class on Tuesday, both the junior and senior classes were escorted into the football stadium to watch the simulation of a car accident. The scene that everybody first witnessed when walking into the stadium was 15 skeleton-faced students standing on a large blue tarp hiding what many knew was to come. The stadium bleachers started to fill with students, teachers, and administration. As soon as everybody was seated, the presentation began.

It began with a 911 call, played on the stadium-speakers, in which a civilian started to explain about a car accident by SBHS. As soon as the 911 operator started to speak, the student in the stands, who were laughing and talking, all became eerily quiet. Three 911 calls were played before the blue tarp was taken off to reveal the staged accident.

Senior football player Joseph “JJ” Melo, was seen lying on the cold, hard ground covered in blood. Chris Blake, another senior football player, who played the role of the driver of one of the vehicles, ran out of the car to aid Melo and other students in the opposite vehicle who included Eastyn Urbina and Dollie Partida.

Blake portrayed an intoxicated driver. The scene played out with police officers, the fire department, ambulances, and the fire rescue squad aiding Melo, Urbina and Partida.

Since Melo was pronounced dead on arrival and was attended to last, as a foreshadowing the Grim Reaper stood above Melo as a sign that he was truly gone. Urbina and Partida were trapped in their vehicle, so fire rescue used the jaws of life to open the car door and aid them, as the crowd watched. Both students were placed in ambulances but Melo wasn’t. The Grim Reaper placed his hand on the windows of the ambulances to foreshadow their unfortunate deaths. Blake was then given sobriety tests, and when he failed, was handcuffed and placed under arrest. At the end of the simulation, Melo was photographed by the coroner and then was placed in a body bag and taken to the morgue.

Before students were released, Principal Todd Dearden spoke to the crowd to give them a quick glimpse into what the students who participated in the crash had in store. He also explained how Blake’s choice to drink and drive affected the students involved in the accident, as well as Blake himself. Dearden also explained about own personal experiences that he and his family went through.

Dearden ended his heartfelt speech by informing students that if they were having a difficult time with this situation, there were counselors in the office for the students to talk too.

The funeral began on April 22, which was Day Two of the Every 15 Minutes program.

It was held in Matson Gym, to accommodate all of the students, parents, and faculty involved. Students sat in the bleachers, parents were placed in chairs near the front a podium, and “living dead” students were placed on either side of the podium.

The funeral began around 11:30 a.m., when the living dead proceeded in with a casket, while bagpipes played. Senior Cheyenne Kistner sang “Amazing Grace.” Students watched the living dead in awe after not seeing their peers for two days.

Introductions were given by multiple people, before a video of the proceeding day’s events was played on the projector screen. Everyone in the entire gymnasium were captivated by the video, due to the fact that it showed some of what happened that day, that the audience didn’t see first hand. Those events included the ambulance ride for Urbina and Partida, parents finding out from CHP officers that their children had died, and the identifying of Melo’s body by his mother. Throughout the video, the living dead and a majority of people attending were visibly upset. Senior lacrosse player, Bailee Nelson, and Melo, who were both part of the living dead, held hands to physically and emotionally support one another throughout the powerful video.

After the video, the friends and family of the living dead then went up to the podium to read their last letter to their loved ones. Each letter read, caused more heartbreak and emotions to flood the entire gym. The living dead then had the opportunity to read a letter of their own to their parents.

Nelson read her letter first, bringing nearly everyone to tears while she fought through her own. Partida read her letter next. Having a hard time reading it, she received support from another living dead member, Shelby Kennedy.

Toward the end of the funeral,former SBHS teacher Louise Roy spoke about a personal experience of her son, who died in an alcohol-related accident at age 21.

As the mock funeral came to a close, the living dead and their parents were dismissed and proceeded out of the gymnasium. Before the rest of the students were dismissed, Principal Dearden spoke one last time. He did a quick demonstration asking students to stand if they have been impacted by an alcohol-related situation, and he reminded them to make smart, mature decisions.

Senior varsity baseball player, Riley Lange, who was part of the living dead, said the experience. “Was definitely life-changing. It gave me a whole new perspective on life.” said Lange. Charlie Garcia, Lange’s close friend, was one of the few students who read their letters to their “deceased” friends, and Garcia’s letter greatly affected Lange. Seeing Garcia cry in front of so many people was “brutal” for Lange, he said. Lange broke down as well while hearing his best friend read the letter. “It was indescribable, and it’s something I hope he never has to go through again,” Lange said.

“When something like that happens, it doesn’t just affect you, it affects the whole community, and it’s not just a short-term thing, it’s a lifelong thing, that you’d have to live with every day,” said Lange, regarding people who think about drinking and driving.

Urbina, who “died” in the pseudo car accident, said that this experience for him was really “intense and hard.” It was difficult for him to watch his friends experience it as well. “The funeral was really heart wrenching,” said Urbina, who lost multiple family members within his 18 years of his life. When asked about the value of the “Every 15 Minutes” program, which occurs every two years on campus, Urbina said, “I wish every kid at the high school got to experience this simulation because it feels so real.You’d feel the feelings, feel the sorrow, and all the other things that come with that situation, as if was real life.” 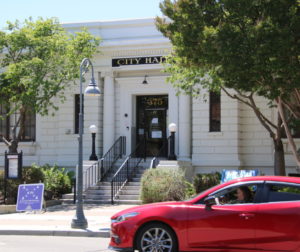