The San Benito County Farm Bureau has been teaching kids about farming for 30 years during Farm Day and is now in the classrooms of every school to bring the message of healthy, locally-grown food. 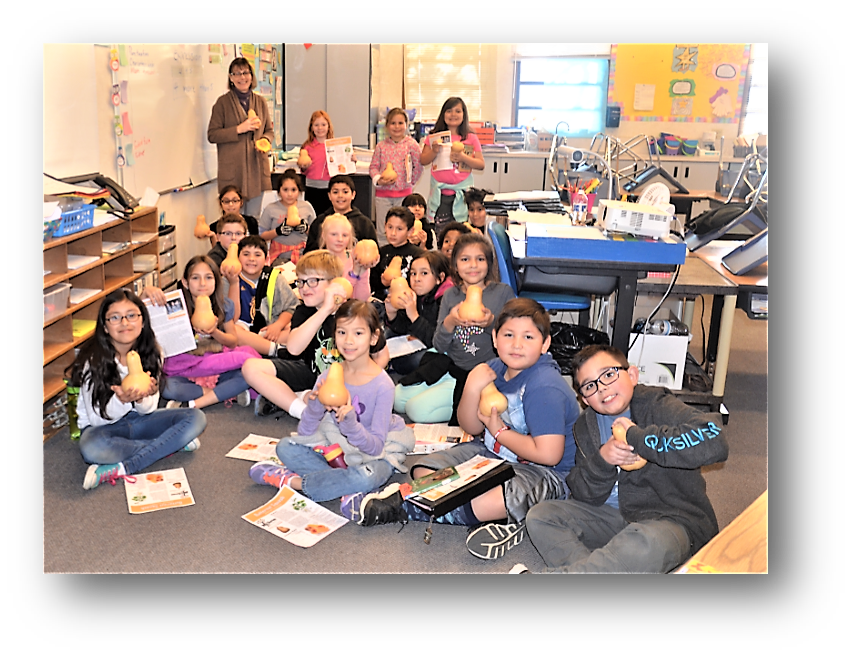 There’s been an odd phenomena going on in San Benito County. Kids who say they hate vegetables have been coming home from school mysteriously transformed into veggie lovers—especially if they’re raw.

The evolution of Ag in the Classroom goes back 30 years, when Mildred Freeborn, a Farm Bureau fixture for decades, got together with cattle ranchers, farmers, and educators to launch Farm Day. Generations of third graders learned about agriculture and gained first-hand experience about farming in San Benito County at the annual event held at Bolado Park.

When Sotelo first joined the Farm Bureau, she brought with her a passion for education. She began attending Ag in the Classroom conferences on a state level because she recognized the need to engage students about agriculture in the county. In 2010, the Educational Ag Tours for Teachers, or EATS Workshops were launched in order to give teachers tools on how to use Ag in the Classroom curriculum.

“We spent the mornings educating them on San Benito County agriculture and in the afternoons we conducted tours of different operations so they could see what was going on in their county, along with the importance of agriculture here,” Sotelo said.

Coffelt said the curriculum had different themes. One might be all about water and another it might cover labor issues.

“It was an exposure to the various components of the Ag industry,” Coffelt said. “This would give them the tools to share that knowledge in the classroom.”

Sotelo commented that because less than two percent of the nation works in agriculture it is important that those who do work in Ag educate the 98 percent who don’t. She said by educating the teachers they could go back to their classrooms and share the knowledge in a fun way. She said the lesson plans were well thought out as they worked with the director of curriculum in the county Office of Education.

“Everything we did related to the standards and it was very relevant and fun,” she said.

She said they covered just about every aspect of modern-day farming, including some of the political hot-buttons, such as genetically modified organisms or GMOs, but not as propaganda or “in a preachy way.”

“We give them the information and then they decide what they want to believe,” she said. “There’s a lot of misconceptions about agriculture and we just wanted to show them what’s going on at the farms.”

Among the most common misconceptions, according to Coffelt, is that all farms are huge corporations, which may be the case in years to come because of labor issues. She said because of legislation concerning overtime pay and other issues small, family farms are slowly being driven out of agriculture.

“If you look at our county the average cattle herd is 50 or less,” Coffelt said. “There are a lot of challenges in our county and the state with regulations, water and labor. This opportunity to share with teachers some of those struggles for farmers and ranchers have been helpful.”

Sotelo said the lessons also cover food safety in order to get across to the teachers how safe the food supply, particularly in the county, really is. Coffelt said there remains a major disconnect between agriculture and a majority of the public. She related that most people have not had a connection to agriculture in generations and what they know about food is through the media, which is often biased.

“Our job, as Ag educators, is to give them the real story, let them look at it, see it, feel it, so they can know it first-hand,” Coffelt said.

Sotelo said county residents should be more aware of local growing conditions and food-safety practices.  She brought up the issue of organic fruits and vegetables, commenting that local growers are held to strict guidelines and regulations, but said people should ask if produce coming from other countries are held up to the same standards. Through the Farm Bureau’s educational programs teachers, and then their students, learn why it’s important to know about locally-grown food. She qualified the concept of “local” by saying it means San Benito County first, then California, and then the United States.

Under the umbrella of Farm Day, which is for third graders, is the Educational Ag Tours or EATs workshops for teachers, and then Harvest of the Month for all students in San Benito County. The lesson plans are free to all schools and funded by San Benito County Farm Bureau, Monsanto, the Community Foundation for San Benito County, and various individual donors. Local farmers supply fresh fruits and vegetables. Coffelt said the program has been provided to as many as 4,000 students a year.

“We have everybody from pre-school to high school,” Coffelt said. “We have some special-needs students that we service. We do a lot with Emmaus' House and Chamberlains Children Center. Every month there’s new materials in which we feature a different locally-grown food. Next month is apples. They are locally grown. These are San Juan and Hollister apples. We produce materials on how apples are grown, their nutritional value, servings per day, fun activities with apples, the history of apples. Then we have the meet-the-farmer segment that talks about who farms the apples, how they got into agriculture.”

Coffelt said the students are first asked to taste the fruits and vegetables raw and then they can prepare them. She said the Ag curriculum is in compliance with Common Core and teachers can incorporate it into any number of subjects, including leadership, art and science. She said while there is a 20-minute requirement for the program, teachers often exceed that time. Meet-the-farmer stories, recipes and nutritional information is given to the students to take home for their parents.

Sotelo said the printed materials for teachers and students, along with boxed fruits and vegetables, are provided for about 130 classrooms each month. She said when the program first began it was important to get the materials into as many classes as possible. As it has grown, teachers are being asked for more feedback in order to improve the program. She said it’s more about quality than quantity now.

While it is important to get the local Ag story into the classrooms, it couldn’t happen without funding. Sotelo said the Community Foundation for San Benito County provided initial funding, but the program could not continue without larger grants, and that could not happen until Ag in the Classroom became an official 501(c)(3) nonprofit, which happened eight years ago. Under the USDA and the California Department of Agriculture, a three-year California Specialty Crop Block grant of $130,000 set the program in motion.

Coffelt said she and Sotelo took generic educational materials and came up with study materials that related specifically to the county. Sotelo said they wanted to focus on what is grown and by whom in the county, rather than throughout the state.

“We’re focused on educating the community and are thinking of expanding our efforts,” Sotelo said. “We’re looking at doing a farm-to-table dinner, where you would have a wonderful meal, but there would also be an educational component.”

Coffelt commented that the program has grown so much in popularity that teachers have told her how they look forward to signing up again and receiving new materials. She said response from the children is both exciting and, at times, unexpected.

“Most kids typically don’t think they like asparagus,” she said and related how the kids reacted when she was bringing a box of asparagus to a Ladd Lane class. She asked them if they ever ate it raw. “I handed out some and they were so amazed at how different it tastes raw, as opposed to cooked. They became asparagus lovers. Unfortunately, asparagus is one of those crops not grown much in our county because of high labor costs.”

She also brought up pumpkins, which she said no one thinks of eating raw. She said she had raw samples, plus some cooked with different kinds of seasonings. Surprisingly, she said some kids asked for seconds of the raw pumpkin.

“What we’re asking children to do is taste, feel and experience,” she said. “It’s just learning things to help them make healthy choices.”

Sotelo had her own unusual story. She said she went to Cerra Vista School to give out an award for the Farm Day Bookmark Contest. She said bookmarks were given to every student and they were treated to apple cider and pizza. She asked the class what their favorite crop was that they had learned about during the Harvest of the Month program.

“You expect to hear apples or raspberries and other fruits because they’re sweet, but what you don’t expect is cilantro,” she said. “I can’t tell you how many kids raised their hands and said ‘mine was cilantro.’ It was amazing how many kids said cilantro or bell peppers. A lot of times, we assume that every kid has tried, let’s say, a walnut. One of our teachers asked her kids how many of them had never had a walnut. She couldn’t believe there were a good number of kids who never tried a walnut. That was unbelievable to us.”

Sotelo said while some kids may have experienced certain vegetables in their homes, it isn’t until they are in a classroom, with their peers that they actually tried them.

“It’s not ‘oh, I don’t want to eat my vegetables,” she related, “it (tasting in class) becomes this really neat thing and it reinforces healthy eating. This last month, we did bell peppers and one of the parents helped do the lesson and she said it was so cool because at the end of the day she said, ‘I’m walking out and the kids are lining up for the buses and some of them are eating bell peppers like they were apples.’ It’s amazing, how open the children are to trying things. I believe we are giving them a strong foundation learning about agriculture, about seasonality, the farmers, and the importance of agriculture to San Benito County. But they’re also learning about the wonderful benefits of these fruits and vegetables.”

Coffelt said both of them are passionate about the Ag in the Classroom program.

“She has her job as executive director of the Farm Bureau and I have my family ranch, so we aren’t doing this because we’re looking to make a living,” Coffelt said. “We’re doing it because it’s a labor of love.”

For more information about Ag in the Classroom, visit the California Farm Bureau website.