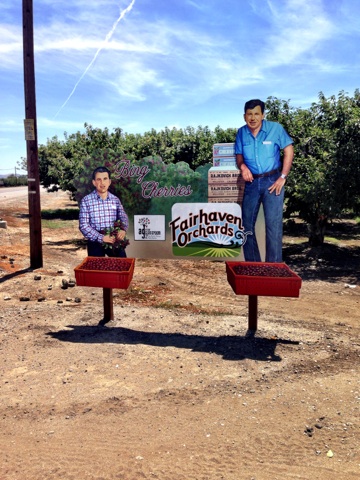 With its rolling hills, sprawling orchards, and a variety of row crops, San Benito County embodies the look of agriculture. Despite being familiar with this scenery, many individuals do not realize what type of crop they are driving by.

The San Benito County Farm Bureau has found a way to address that curiosity while also paying homage to local farmers by using an Ag in the Classroom grant to place crop identifier signs near field and in orchards around the county. Nicole Rajkovich, daughter of Fairhaven Orchards co-founder George Rajkovich, said that the signs “are a great way to help citizens identify our crop, Bing cherries.” The Fairhaven sign is located on Highway 25 on the edge of one of the family's cherry orchards. She said that the Farm Bureau approached the family about the idea after noticing similar signs in the Salinas Valley.

Richard Bianchi, president of the local farm bureau, said that most crops grown within the county, such as walnuts and apricots, are in fact “specialty crops,”  which may not be immediately identifiable to passing motorists.

Bianchi said, “So far, Tonascia Farms, B & R Farms, Yamaoka Farms, and Williams’ Farms have signs up. However, there are more in the works.”

Farm Bureau member Mary Lou Coffelt said that artists hand-paint these signs, which is why the process is taking a bit of time. “Within the next three months, all of the signs will be up,” she said a few weeks ago. Bianchi said the Farm Bureau’s goal is to educate the county in all things agriculture-related. After being asked numerous questions regarding what type of crops are being grown, as well as taking inspiration from signs in the Salinas Valley, the bureau realized what an asset crop identifier signs would be to the county. Bianchi also expressed the importance the signs play in recognizing all of the hard working families that grow, harvest and sell ag products in San Benito County.