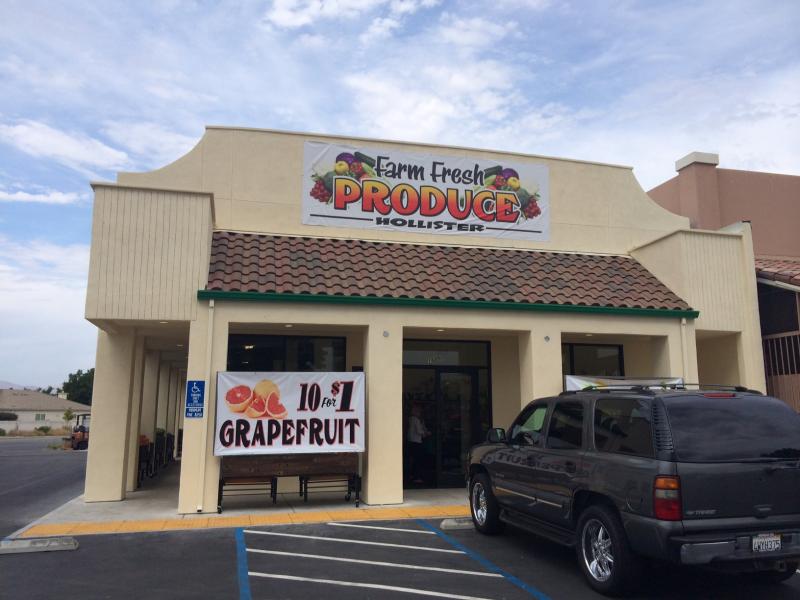 There is a new place to buy fresh and locally-grown produce in San Benito County. Farm Fresh Produce, on Airline Highway next to Rite Aid, last week opened its doors earlier than anticipated because demand in the community was so high. The building, which opened for business on July 10, took two years to be completed but it was worth the wait to owners as people kept coming in and out of the store all day.

Jesus Beltran, who is one of the managers in the store and has a number of years of produce experience, said Monday that the store still has some produce to put out.

“We opened early, so about 75 percent of the produce is out already," he said. "We expect be 100 percent stocked by the end of the week.”

While there are a number of grocery stores that sell fruit and vegetables in Hollister, Beltran, who commutes from San Jose, says Farm Fresh Produce is different.

“Our entire product is local; Green Cousin out of Hollister is one of the farms we get produce from. Our produce is picked from the ground, and delivered directly to us. Since we order in small quantities we get the freshest produce at a great price.”

He says other stores buy in bulk from farms from across the country, making the transportation time longer at the expense of freshness.

“We carry products from Christopher Ranch in Gilroy, Green Cousin in Hollister, and various other farms from around the Central Coast,” he said.

When Beltran was asked if he feels his store will impact the weekly farmers' market downtown, he said farmers and customers will benefit: “The farmers get to sell their product at the farmer's market, and then they also get to sell it here," he said. "Customers can now buy their fresh produce any day they want.”

Farm Fresh Produce is locally owned. “We have other stores in Morgan Hill and Moss Landing, but this one is the first of its kind,” Beltran said, referring to the structure of the building, which has an open and outdoor feel. “We have these huge open doors on the side, and it gives it the outdoor feel. If it’s hot outside, you will be able to feel that it’s hot from inside the store.”

Hollister resident Kelly Hacker stopped by the market Monday after hearing about in on Facebook.

“I am really big about the quality of the produce I buy,” Hacker said. “The price here is amazing, I just walked in and I like the prices already.” Hacker said she was pleased to see other products and produce that she can’t find elsewhere in town. “I will continue to shop at the farmers’ market downtown, but now I have another option.”

Beltran noted that customers can make requests of the store.

“If we don’t have something in stock that you want or need, we can order it for you from one of our local farmers and have it in the store for you," he said. "If you need something, come on in and I will take care of you.”