$3.5 million project to include splash pad and climbing wall. 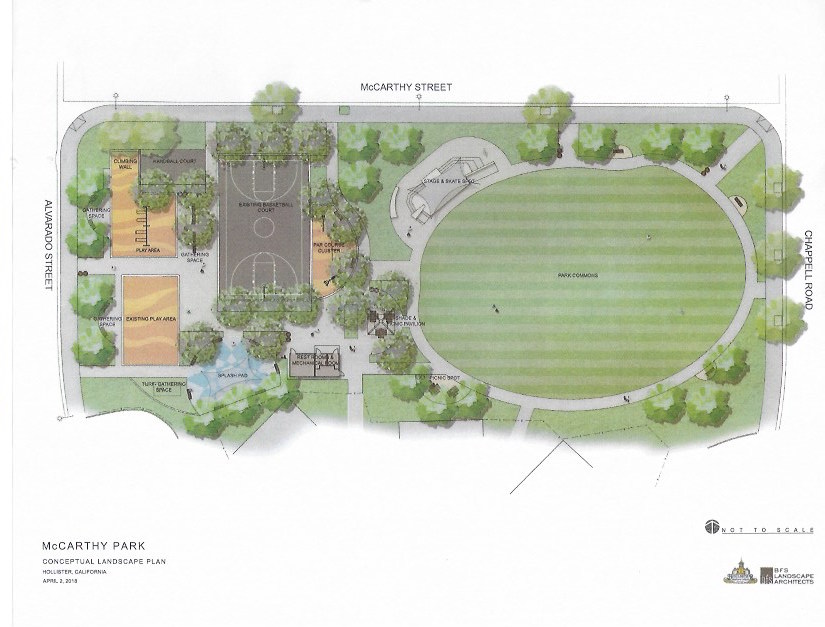 Conceptual design for McCarthy Park. Image provided by the City of Hollister. The final design for McCarthy Park was approved by the Hollister City Council on Aug. 6.

Management Services Director Mike Chambless said at the council meeting he was hoping for a Memorial Day opening of the location just northeast of downtown Hollister.

Hollister resident Zavan Quezada asked the council why they are spending the money on a new park when the existing parks need attention.

“$2.5 million we can do so much with the parks we have around and start making lands for other things and destinations like libraries,” Quezada said, who is running for mayor of Hollister in November.

Chambless said during the intergovernmental committee meeting Aug. 2 that the park will be divided almost in half between an active area and a passive area.

The splash pad will be three times the size of the one located at Valley View Park, also known as Whale Park. It will have a water tower feature with a bucket of water falling into the tank, which will then make the bucket within the tank flip over and dump water onto the pad.

The three-swing set will cost $60,000. Chambless said the price is steep because it’s a high liability item.

The rock climbing wall will be about eight feet tall, with the other side to be used as a handball wall. Rubber tiles will be placed on the ground below the climbing wall to cushion any falls. Chambless said the city is moving away from loose rubber because it is harder to maintain.

The passive area of the new McCarthy Park design will include an open grass area and a combination stage and skateboard area. The skate park is designed for smaller riders and younger children in response to complaints that the Hollister Skate Park on Memorial Drive was designed for older youths.

It also includes exercise stations on the perimeter. The stations have no moving parts, which make them easy to maintain.

The $3.5 million project includes a restroom that will be a little bigger than the one at Valley View Park because all the filtration equipment will be in the back room, Chambless said. McCarthy Park will have low water consumption landscaping and lighting throughout the park.

The City of Hollister received a grant for $660,000 from the state of California to revitalize the park in July 2017. The remaining $2.8 million is expected to come from the Park Development Fund, Chambless told the intergovernmental meeting.

The city plans to place the project out to bid no later than Aug. 24, with a closing date of Sept. 24,  and expects that construction will begin in October.

BFS Landscape Design of Pacific Grove designed the new iteration of McCarthy Park, and is the same company that worked on Calaveras Park and Valley View Park.