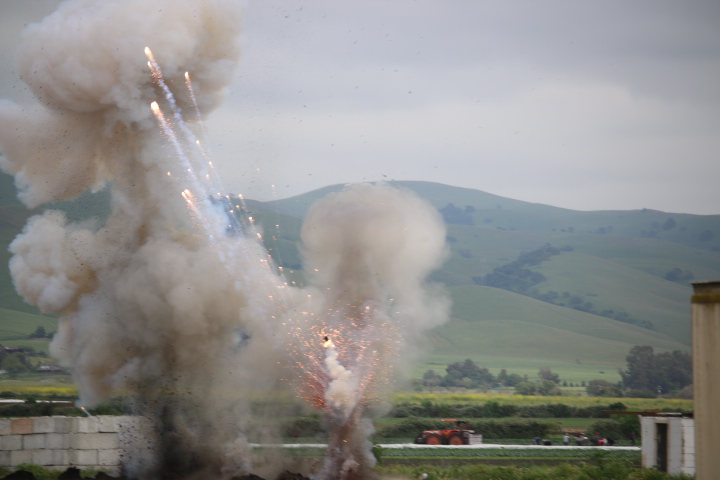 The massive explosion is one of many over next few days. If you happen to be anywhere east of Fairview Road during the next few days and hear something that sounds like a large explosion, that’s because several agencies, including the ATF, EPA, and the Monterey Bomb Squad are blowing up some 15 tons of explosives that were more or less abandoned just off Santa Ana Valley Road.

Steve Calanog, spokesman for the San Francisco office of the Environmental Protection Agency's Emergency Response Group, said the site of the explosions at 2707 Santa Ana Valley Rd. was once MK Ballistics, which went out of business a number of years ago. He said the company manufactured special non-lethal ordnance for law enforcement agencies and the military.

“In the last few years their permits to have and store explosives and other ordnances lapsed,” Calanog told BenitoLink on Tuesday. “Agencies, including the county district attorney, the California Department of Toxics and Substance Control, and the ATF had done various inspections of the facility and there was a concern about the amount of explosives left here. They were working with the owner to determine if this stuff could be moved off-site. He insisted at the time that he would be able to sell it or give it to other companies, but that didn’t happen.”

He said the county contacted state and federal agencies about the situation and that a week ago there was another inspection that determined, due to the deteriorated state of the explosives from exposure to the elements and time, they were unsafe and action needed to be taken to prevent an accidental or spontaneous explosion.

“We started yesterday (Monday) with the Monterey County Bomb Squad, San Benito County Fire Department, the EPA and DTFC to remove them,” Calanog said. “Much of the explosives proved to be unstable and we were not able to transport them safely, so they’re being detonated or burned here.”

Security was an issue, he said, noting that the ordnance and explosives were kept separately and locked in the proper containers. While it was unlikely that there might have been an accidental explosion, the fact that there had been no physical security whatsoever left open the potential for theft.

“When the business was operating, there was apparently people here full-time,” Calanog said. “Security was surely an issue, and since last week we’ve had security out here.”

Remarkably, he said the closest thing to any form of security was a neighboring farmer working in the fields. The EPA was only notified about the explosives two weeks ago by the county, which had been working with the owner to figure out what to do with the explosives.

“That’s why they contacted us when they ran out of options,” Calanog said. “He wasn’t getting rid of it so it was time for us to do something.”

The property owner had been on the property earlier, Calanog said, along with the ATF to remove about 40 firearms also left behind, including handguns, long guns and even grenade launchers, all of which he apparently had permits for.

“We got here yesterday and consulted with the bomb squad on how to approach it,” Calanog said. “We’ve got 150 burn pits out there in an empty field. We’ve been taking about 40 pounds at a time. There’s about 30,000 pounds of Benite, a type of explosive. It basically burns. It’s a little less energetic than traditional gunpowder. It burns very hot, but not as hot as phosphorous.”

According to an EPA press release, there were nearly 15 tons of explosives, including smokeless powder, black powder, silver iodide and silver iodate. The controlled explosions will take place between noon and 3 p.m. throughout the week. EPA stated that it is working on this emergency response in partnership with the City of Hollister Fire Department; the San Benito County Sheriff’s Office; the Monterey County Sheriff’s Office; the California Department of Toxic Substances Control; and the U.S. Bureau of Alcohol, Tobacco, Firearms and Explosives.

For more information, contact EPA Public Information Officer, Michele Huitric, by email at [email protected] or by phone at 415-972-3165.