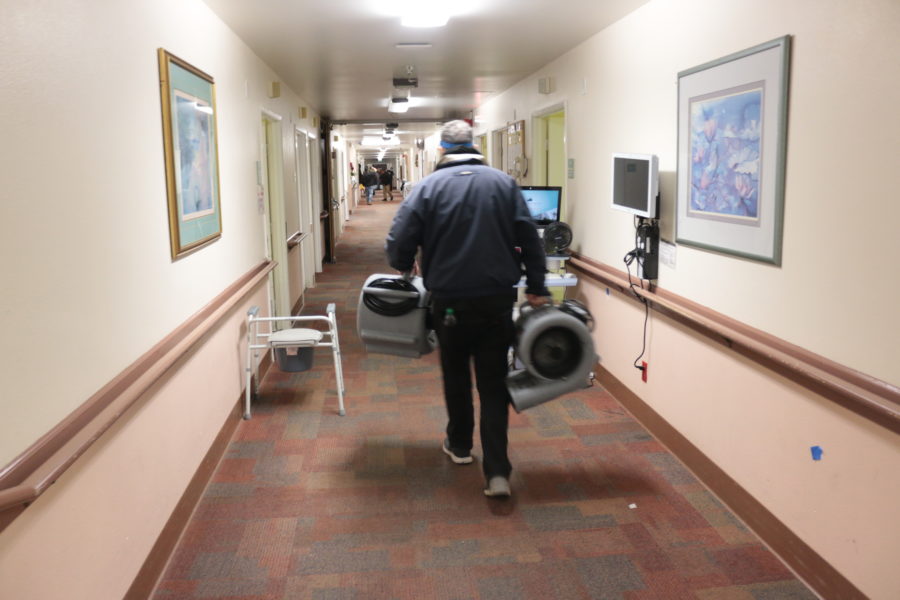 Low-level fans were brought in to keep the airflow down because of bacteria. Photo by John Chadwell. 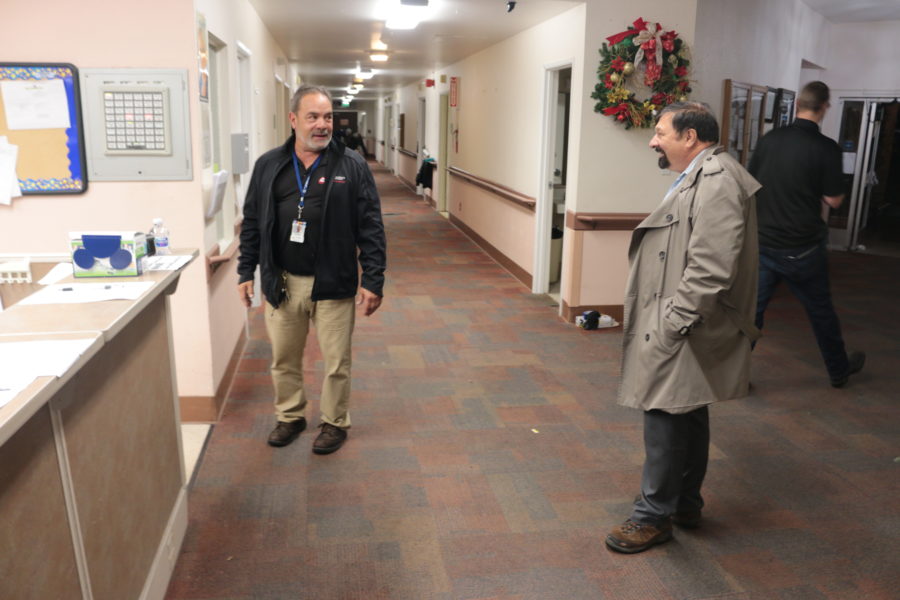 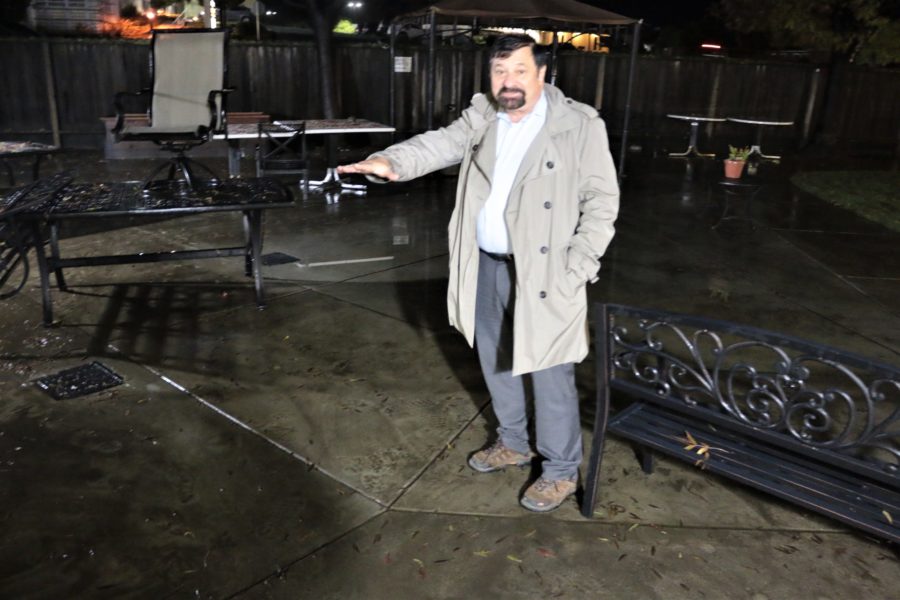 CEO Ken Underwood showed where the water came down the hill into the skilled nursing facility. Photo by John Chadwell. 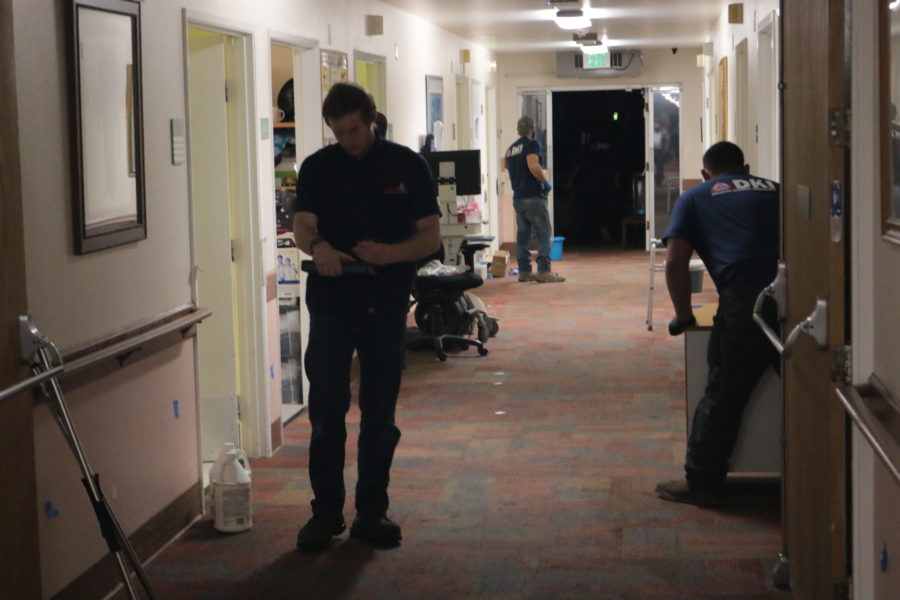 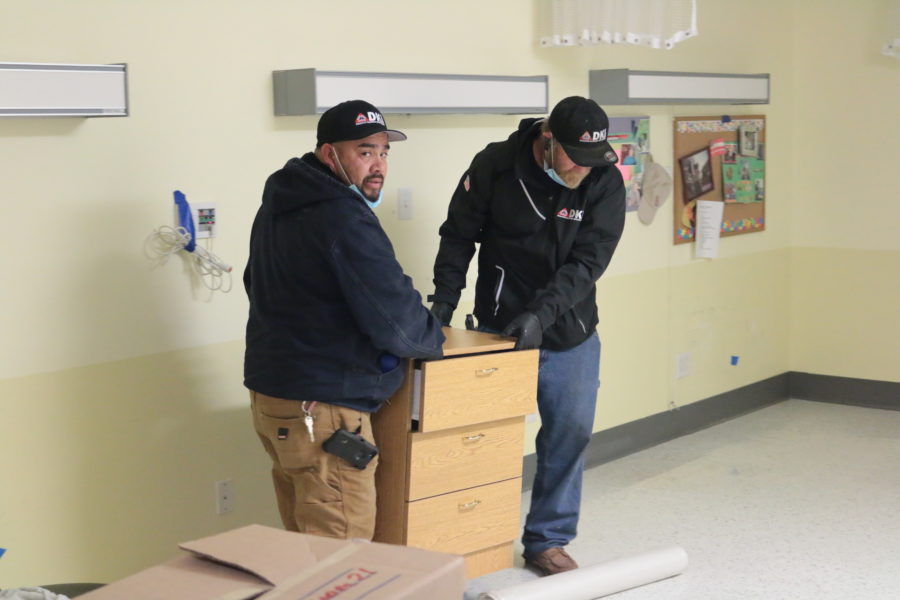 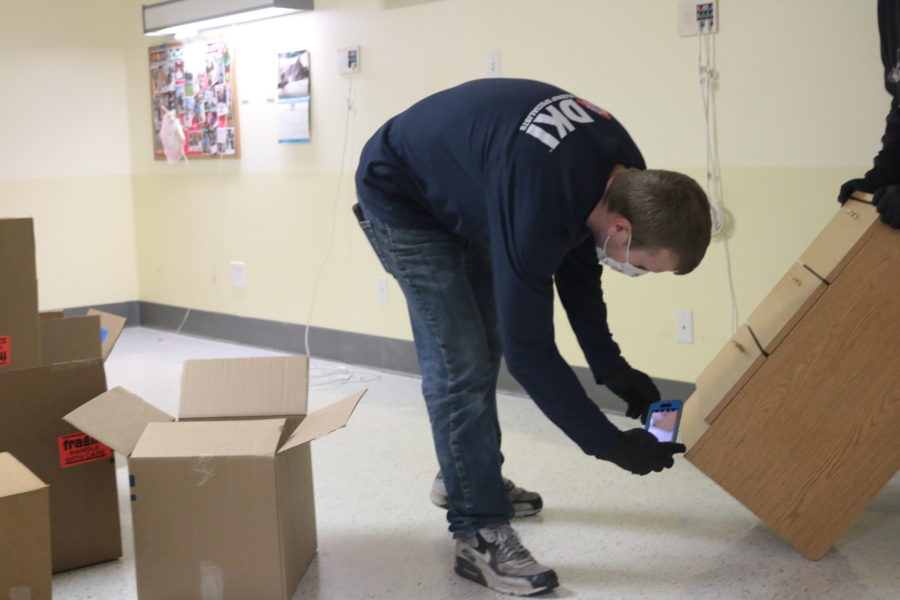 Forty-six patients moved to Hazel Hawkins and another facility. 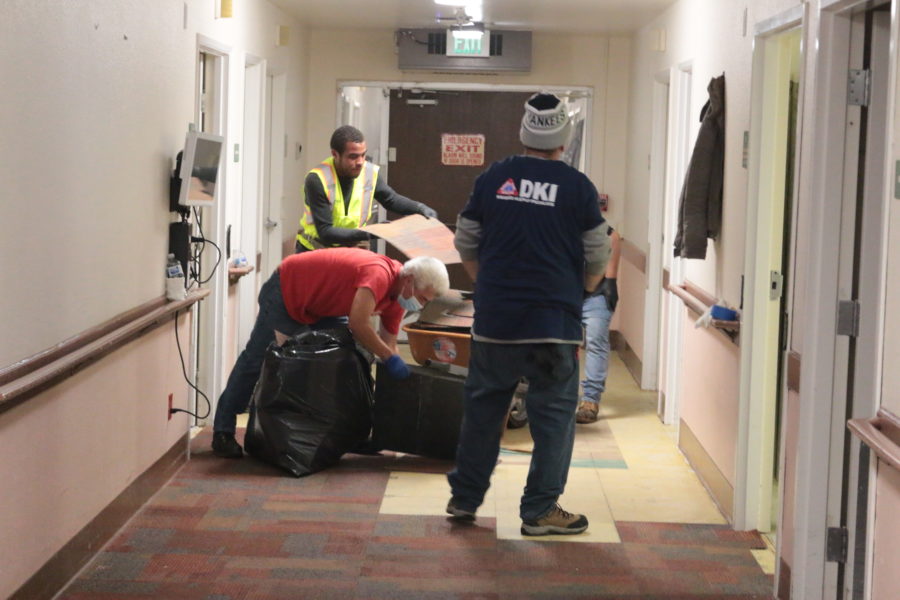 The clean-up after the skilled nursing facility on Sunset Drive flooded on Dec. 4. Cleaning could be extensive if asbestos is discovered. Photos by John Chadwell.
×

As a significant weather advisory popped up on cell phones and computers across San Benito County on Dec. 4, rushing water was already backing up on Sunset Drive across from Hazel Hawkins Memorial Hospital. In a matter of minutes, it flowed over the sidewalk and cascaded down a sloping hill into the Mabie Northside Skilled Nursing Facility at 900 Sunset Drive, where 46 patients lay in beds unable to escape on their own.

BenitoLink spoke with hospital spokeswoman Frankie Gallagher and CEO Ken Underwood at the scene, after the Hollister Fire Department had pumped the water out of the facility and the patients had been moved to the hospital and another nursing facility.

“Once we realized this was happening about 2 o’clock, we called an alert and started moving patients out of those rooms into drier areas of the facility,” Gallagher said. “We had a response from the Hollister Fire Department and San Benito County Environmental Services. Around 4 o’clock by recommendation of the fire chief [Bob Martin Del Campo] we began to evacuate the 46 patients. We called to get mutual aid and ambulances in here.”

Ambulance crews began moving patients across the street to Hazel Hawkins at 4:30 p.m. Gallagher said 31 patients were moved to the other nursing facility, and 15 were moved to the hospital. She said it was too early to determine how long they would need to stay in the other facilities.

“We were fortunate to get a disaster cleanup crew in here to move things out of the patients’ rooms and hallways,” she said. “We need to pack everything up, flooring needs to come out, and they need to check the walls for water, but our main focus is the safety of our facility and our patients. We’re not in a big rush to get them back here because we want to make sure the facility is clean and there are no mold issues.”

Underwood said the most fragile patients were taken out first and transported to the skilled nursing facility.

“There were 13 rigs here from Monterey, Santa Clara, Santa Cruz and county transportation came in with their shuttles to move the ambulatory patients,” Underwood said, explaining that those taken to the hospital were not admitted as patients, but simply provided beds.

He said Sunset Drive has always been prone to flooding.

“But as long as I’ve been here we’ve never seen it like this. The fire crews were here immediately to pump out the water from the back patio and the side, but there was probably a foot of water coming in through the rooms.”

After the fire chief recommended that patients be evacuated, Underwood said hospital staff determined there were enough beds to be able to transfer them.

“We called extra staff in, AMR paramedics came in, and we made sure everyone was transferred along with supplies and medications,” Underwood said. “The final patient was transferred out by 8 p.m.”

“We’re incredibly fortunate because other places have tornadoes and fires,” she said. “We needed to get them out, but it was not an immense emergency that other types of disasters cause. We were fortunate that we had the time and personnel to get everybody out.”

Inside the facility, 25 personnel from the Monterey-based Disaster Kleenup Specialists were busy ripping up carpeting and bringing in fans in preparation for a minimum three-day cleanup.

Jessie Lizama, senior project manager with Disaster Kleenup, said anything that the flooding touched was designated as category 3 water—known as “black water” which is highly unsanitary—and would be removed.

“We’ll be removing drywall and testing for asbestos before we move it out,” he said. “What we’re doing here tonight is trying to stabilize the situation; we’re getting dryers and air scrubbers in here. Then we’ll wait for results [from the testing lab] to come back.”

Rather than utilizing large fans normally used to dry out buildings after flooding, Disaster Kleenup Specialists used smaller fans to keep the airflow low because of potential airborne bacteria.

Lizama said it was likely that asbestos would be found because the facility was built in the mid-1960s and had never been remodeled. He said the clean-up and mitigation work would take three to five days.

“Once we take the carpeting out we’re going to disinfect everything,” he said. “If we find asbestos we go into phase two, which will be abatement for asbestos. It’s a process.” 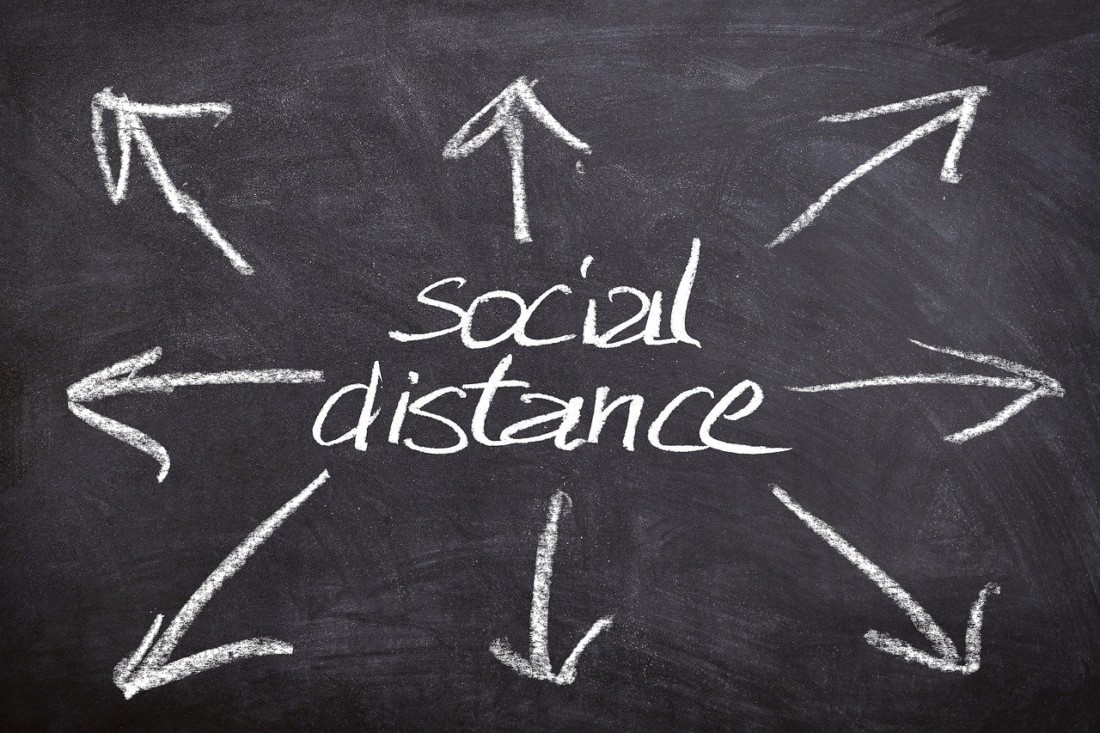 Keep your distance from others to decrease COVID-19 transmission

Maintaining at least a six foot distance from each other is the most critical strategy.

There are 14 confirmed cases in San Benito County since February, 11 of which are active; schools will be closed through May 1; DHS extends Real ID deadline to Oct. 2021; Save Mart/Lucky supermarkets hiring temporary workers.

There are now 12 confirmed cases since February, nine of which are active; schools will continue to be closed through spring break; county clerk's office requests people stop driving from out of county to obtain marriage licenses; Panetta gets SBA to offer Spanish-language online resources.