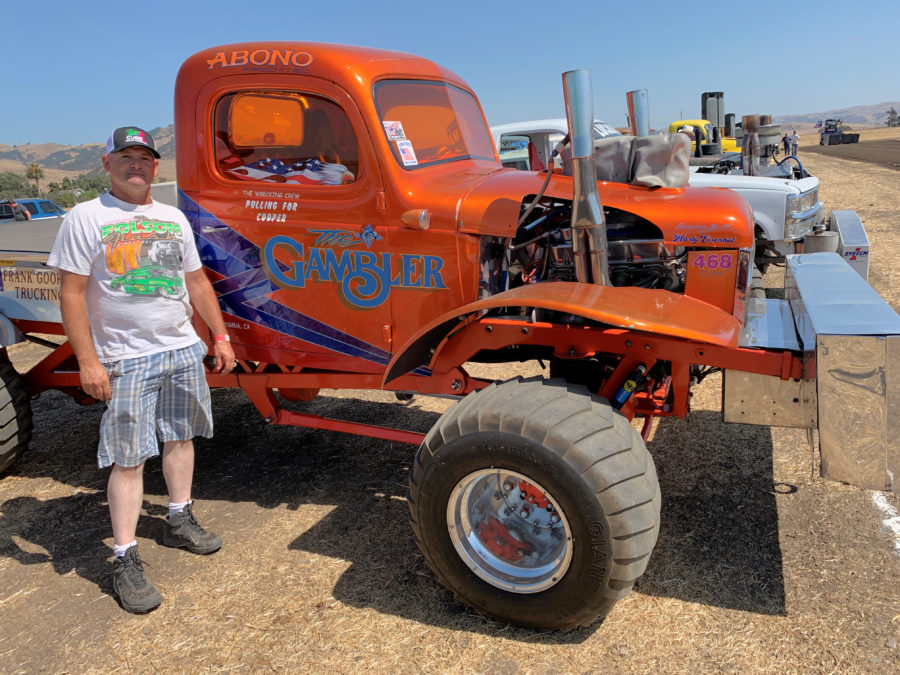 Frank Gookin stands next to his 1945 Dodge Power Wagon. Photos by Robert Eliason.

The sounds of motors revving, people cheering and the sight of tires throwing dirt up into the air filled the sixth annual Pullin’ For A Cure on Aug. 24.

The benefit, held at Samarkand Ranch off Santa Ana Valley Road in Hollister, raised funds for cancer research through the Casillas-Garner Family and Friends Relay for Life team. Along with food, music and raffles, the main event is the truck-pulling competition.

A passion for truck-pulling is what led Mario and Bailey Correa to organize this “crazy idea” in Hollister. Bailey said her husband and his family have always been involved in truck-pulling, but wanted to have something closer to home while benefiting a local organization.

Bailey said while they didn’t break the 100 registered truck goal—they were nine short—they hope to break the $100,000 milestone in six years. Last year the event raised over $22,000, according to its Facebook page. Bailey said the amount raised this year will be announced in October during Harvest Hope for a Cure, now called Harvesting for Hope.

For Columbia resident Frank Gookin, truck-pulling is a competition where trucks are evenly matched, allowing anyone to earn points at any time. Winners are determined based on the distance the trucks pull. But earning points for the Western Ameican Pulling Tour, a 14-round series, was not on his mind as much as his family was when he came to compete in Hollister for the second time.

Gookin’s mom is a cancer survivor, and his 15-year-old son Cooper lives with a birth defect that requires him to have a pacemaker. Gookin’s bright orange 1945 Dodge Power Wagon passenger door reads “THE WRECKING CREW PULLIN FOR COOPER.”

“If you don’t experience things like that in your life, it’s really hard to wrap your mind around how it affects other people unless you’ve experienced it yourself,” Gookin said. He got into truck-pulling when he was about 16 and purchased the Dodge Power Wagon 10 years later in 1997.

Cooper, who has competed in other truck-pulling events, wanted to join his father in Hollister, but is recuperating from a recent pacemaker replacement procedure. Gookin said sharing his hobby with Cooper and his other sons, 21-year-old Nathan and 18-year-old Jacob, makes it more special.

“That’s what makes it a lot of fun now,” Gookin said. “The boys are old enough to drive it so I get my kicks out of watching them drive it more so than me doing it.”