Impacts on Property and Home Values are disturbingly affected by enhanced drilling. 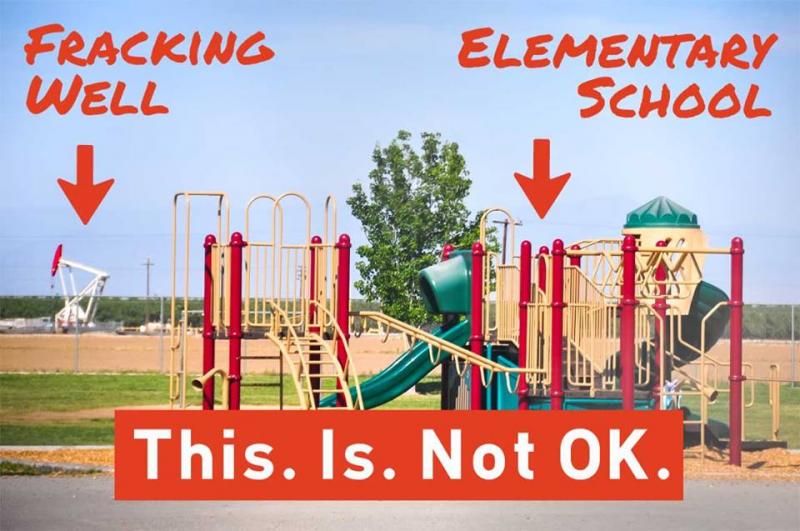 Not in our backyard!
×

The Energy Information Administration, which is the federal energy authority, recently reported that 96 percent of the oil in the Monterey Shale, which lies under a vast region of Central and Southern California, is not currently as accessible as the oil industry would have us believe it is, with the current technology and use of extreme extraction techniques, such as “fracking.” Unlike heavily fracked shale deposits in North Dakota and Texas, which are relatively even and layered like a cake, Monterey Shale has been folded and shattered by seismic activity, with the oil found at deeper strata.

We have discussed the myth that developing enhanced drilling processes in California was not a "boom" situation for our state economy. So, just how would allowing this process actually impact us more on the local level?  Resource Media has compiled an in-depth tip sheet, "Drilling vs. The American Dream,"  to provide us with a "growing body of evidence linking drilling with widespread impacts on property values, property rights and quality of life in communities across America." The guide has been "recently updated to include new data and research and new stories from the growing choir of millions of Americans who are now directly affected by oil and gas development.

There is now a battle between oil and gas and the nest egg of countless Americans. The financial risks posed by drilling are real and substantial, affecting the behavior of banks and insurers, who are now adopting guidelines that forbid mortgage loans or insurance coverage on properties affected by drilling. While there may be short-term windfalls, the study of six western states found that over the long-term "oil and gas specialization is observed to have negative effects on change in per capita income, crime rate and education rate." Buyers in many areas will either reduce their offers by up to 25 percent and some don't want to even look at anything remotely close to existing or proposed well sites.

Many real estate agents find that buyers will ask to look for something else. If they can see it, they figure it is not healthy. Even if an area has yet to determine on whether to allow drilling, the prospect that the region will be opened to it "has spooked potential buyers" in such places as the Catskills in upstate New York.  Real estate agents in rural areas have had to shut down their businesses, as they have so much trouble selling rural properties, "because people don't want to be anywhere near the drilling."

A study conducted by Duke University found that even though lease payments can add overall value to homes with wells drilled on them. The possibility of contaminated water decrease property value by an average of 24 percent. The boost that comes from signing a lease offsets the increases, leaving a net decrease in value of 13 percent. A study in the Texas real estate market, near Dallas, found that homes valued at more than $250,000 and within 1,000 feet of a drilling pad or well site, saw values decrease by 3 percent to 14 percent. In La Plata, CO, officials found that the impacts of oil and gas development found that properties with a well drilled on them saw their value decrease by 22 percent. A study in Alberta, Canada found that the presence of oil and gas facilities within 2.5 miles of rural residential properties reduced property values between 4 percent and 8 percent, with a potential for doubling the decrease, depending on the level of industrial activity. In states like Wyoming, where the EPA has linked groundwater contamination with fracking, farmers have seen the value of their property all but disappear completely.

The researcher was informed by an agent that "buyers may feel reluctant to purchase a property with this stigma."  In some areas, such as Dimock, PA, where fracking problems decimated home values, the drilling company responsible was ordered to pay impacted families settlements worth twice their property values. However, they still had to move, due to documented contamination and health hazards. In Wise County, North Texas, the appraised value of a family's home and 10-acre ranchette decreased more than 70 percent, just one year after the first drilling rig went up on the property and numerous environmental problems related to fracking occurred.

Let’s take a look at the reaction of the CEO and board chairman of Exxon, the largest producer and purveyor of oil and gas in the world, Rex Tillerson. He is currently suing to stop construction of a water tower that would supply nearby drilling operations, due to the “constant and unbearable nuisance” that would come from having “lights on at all hours of the night…traffic at unreasonable hours…noise from mechanical and electrical equipment.”  Tillerson’s lawsuit was filed in 2012 along with other plaintiffs, including former House Majority Leader, Dick Armey. This lawsuit claims the project would do “irreparable harm” to their property values.

Many people are finding it difficult to obtain mortgages on their properties as the mortgage industry is tightening its policies that prohibit lending on properties with wells on or near them or that are subject to mineral rights leasing. Federal lending and mortgage institutions (FHA, Fannie Mae, Freddie Mac) all have prohibitions against lending on properties where drilling is taking place or where hazardous materials are stored, resulting in a “technical default.”  The guidelines of FHA will also not allow financing of mortgages where homes are within 300 feet of an active or planned drilling site. Other lending institutions that are approaching loans more cautiously for properties that have gas drilling leases attached to them are Wells Fargo, Provident Funding, GMAC, FNCB, Fidelity, First Liberty, CFCU Community Credit Union, among others. In fact, Freddie Mac has legal authority to “exercise a call on a mortgage’s full amount” if a borrower signs a drilling lease or enters into a mineral-rights agreement.

The New York State Bar Association has created the following list of risks for those who enter into drilling agreements:

Property owners need to know that damages to property, incurred by drilling accidents is not typically covered by insurance. Nationwide Insurance stated, “After months of research and discussion, we have determined that the exposures presented by hydraulic fracturing are too great to ignore.  Risks involved with hydraulic fracturing are now prohibited for General Liability, Commercial Auto, Motor Truck cargo, Auto Physical Damage and Public Auto (insurance) coverage.”  Add to this this that frequently the insurance held by a well operator or driller, such as Citadel Exploration, Inc., now doing exploratory drilling in South San Benito County, often will not cover damages. This means the property owners and/or the county would have to go through the expensive and lengthy process of suing for damages if they occur. Even if they might win, this does not guarantee the plaintiffs will be paid for all damages, since drillers admit in their regulatory filings that they may not carry enough insurance.

So, why would any of the rest of us want to risk our economic structures and property values for the nefarious practice of fueling our greed for oil and gas?  Are we going to become more determined to "change the model," and learn to live a healthier, more economically viable existence, using sustainable energy sources?