Friends of the SBC Free Library celebrated 37 years of serving the library by presenting Marty Richman plaques in recognition of his support and announcing children writing contest winners. 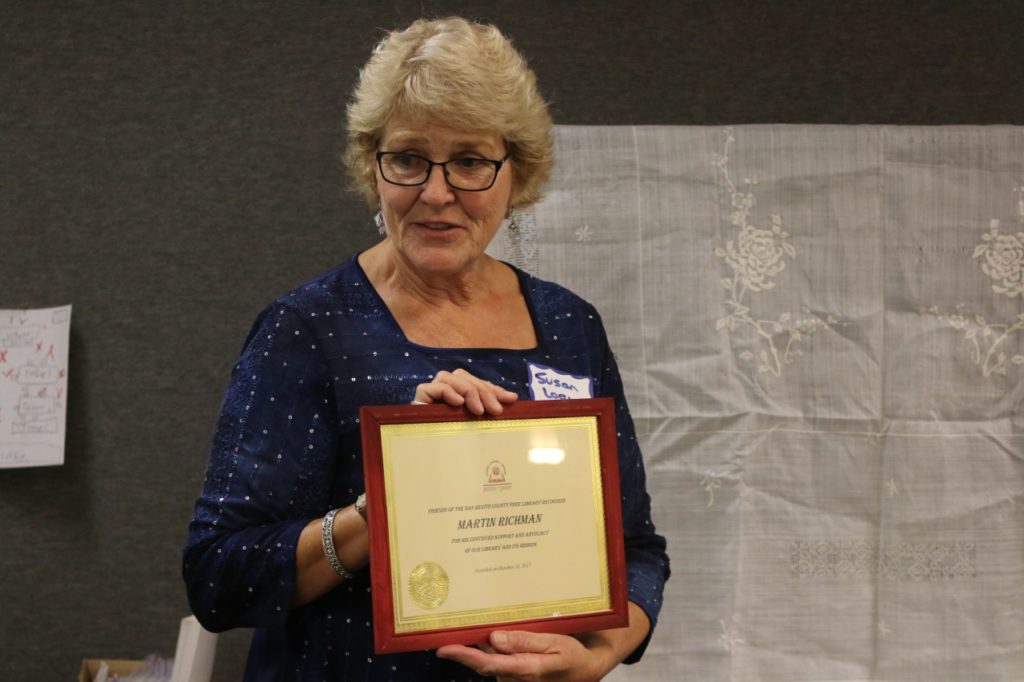 As a good-natured, but earnest gadfly to local politicians, and always vociferous supporter of the San Benito County Free Library, the Friends of the SBC Free Library recognized Marty Richman (a frequent editorial contributor to BenitoLink) for his steadfast advocacy Oct. 18, during the organization’s celebration of 37 years of supporting the library. The award ceremony was part of the celebration to also recognize contributions of library workers, volunteers, and community supporters, as well as the winners of the annual writing/drawing contest to encourage children to depict their favorite library book’s character or animal.

Susan Logue, president of the organization, stood before a room packed with eager contest winners and their parents, supporters, and library staff to announce Richman’s award. The overcrowded room was more than a visual metaphor for the need of a new and much larger facility. At first, Richman appeared to be a no-show (he was searching for a parking place), so Logue began telling the crowd why he was being honored that night.

“He’s been a very strong supporter of the library and an advocate for its use,” she said. “He does a lot of behind-the-scenes research for us about libraries and what they need. He’s been a great friend, and as a result, we have two plaques for him, one from the Friends of the Library, and one from Senator (Anthony) Cannella’s office.”

Rebecca Salinas, treasurer, told the crowd that Richman continually speaks up for the library’s needs at board of supervisor and city council meetings.

“The library is always in jeopardy and that’s why our group is always looking for funds to get those extra things, like this event tonight,” she said. “We couldn’t do it without those funds and he is one who gets up and speaks for the library.”

It was then that Richman finally appeared in the doorway at the back of the room and Logue announced his arrival like an arriving celebrity. While local politicos may not believe it, Richman is really shy by nature, and he appeared a bit overwhelmed and somewhat embarrassed as he walked down the aisle to the enthusiastic applause of those surrounding him. As he came to the front of the room, Salinas described him as “intelligence itself and committed to our community.”

She went on to say the organization came up with the idea of the presentation because, at the time, Richman was planning on moving out of state. But his plans changed, she explained further.

“He’s not going after all,” she said as she handed him the plaque from Sen. Cannella’s office. “This is the real thing and we’re very proud to present it to you. You deserve every bit of it and I’m going to hug you, whether you like it or not.” And she proceeded to do just that.

Logue handed him the Friends of the Library plaque and thanked him for his support. Richman thanked her and called for his wife of 53 years, Joyce, to join him at the front of the room.

“I couldn’t do this without my wife, Joyce, who basically does all the work and then sends me out the door,” he joked and added, “I’m not being shy when I say I don’t deserve this. The power to make things happen is in your (audience's) hands. When I speak, people like my loud voice, but they know I’m only one vote. You have the power to make things change and if you’re willing to talk to the people who represent you and say, ‘this is what I want,’ there’s no reason you can’t have everything that they can give.”

Nora Conte, county librarian, told of how she met Richman when she first came to the library and he contributed some of his personal books, and how he has continued to do research for the library.

“I thank Marty for all of his time, his efforts, his heart, his spirit, to meet the challenge and continue to say how important the library is for the community, for all of us,” she said and then addressed the audience. “It’s a pleasure to serve you and I am honored every day that we can open these doors to help you and your children.”

Logue then told the audience that there were 75 entries for the writing/drawing contest. She said forms were sent to area schools and the response was overwhelming.

“We want to thank the teachers, principals, librarians, and the parents for helping them take part,” she said.

Winners for the National Library Week 2017 writing/drawing competition were:

For information on Friends of the San Benito County Free Library, visit their website or Facebook page.