Students will get an in-depth look at the plays and films of the founder of El Teatro Campesino. 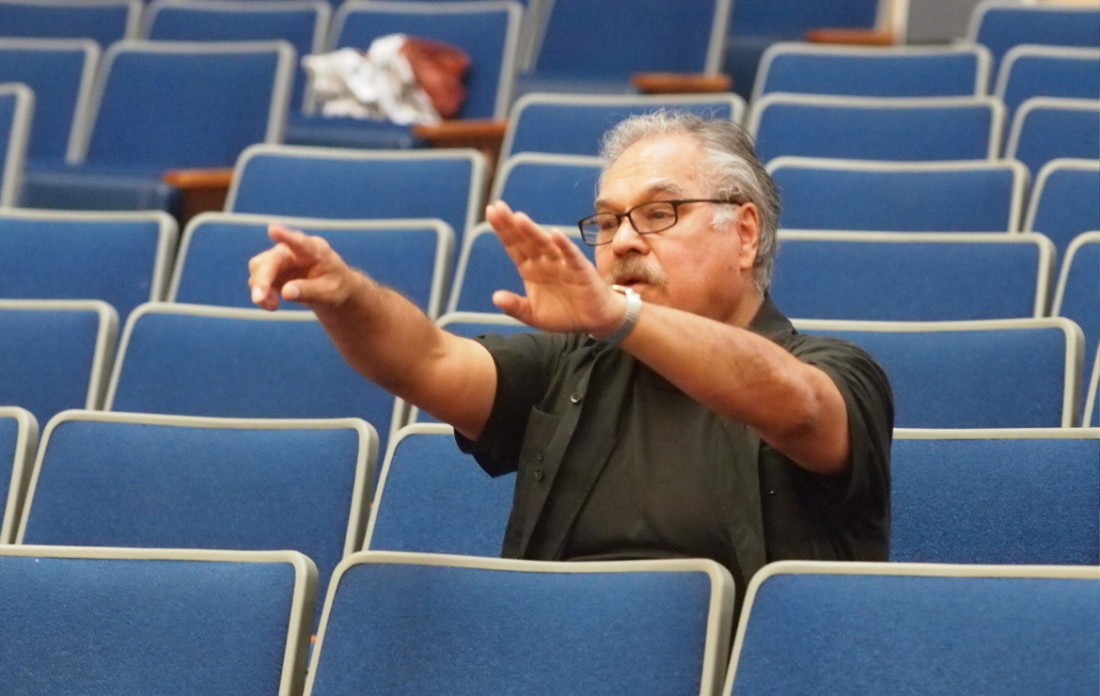 Luis Valdez directing a staged reading of "Valley of the Heart." Photo by Robert Eliason.
×

Ten years ago, before she went off to college, Isabel Cruz gave her final performance in “La Virgen de Tepeyac,” an El Teatro Campesino production staged at Mission San Juan Bautista. This year, Cruz is offering a class at Gavilan College on founder Luis Valdez, giving students the chance to learn more about the actor, director and playwright and his famed San Juan Bautista stage company.

Cruz’s experience with El Teatro led to the chance to create the class for the first time last Fall.

“I graduated from Gavilan College but stayed in touch with the head of the theater department, John Laughton Hale,” Cruz said. “He would have me come back in some capacity to help with shows. Last year, I wrote a play that was supposed to be the spring production, but it got canceled because of COVID. So since I was around anyway, he asked me to teach a course on El Teatro Campesino.”

Performing with El Teatro and her familiarity with both the theater members and the Valdez family gives Cruz a special insight into the works.

“I tell some of my favorite stories that I have heard him tell,” Cruz said. “We talk about Luis’s life and his upbringing as part of a farmworker family. We talk about his schooling at San Jose State because I think it is important for them to know how local he is. Of course, we talk about the structure of Chicano theater and the forms of Chicano theater. And we read a lot of his work—last semester we read a dozen plays.”

The class begins with the earliest plays that Valdez wrote, which he refers to as “actos:” short works on social themes. It ends with “Valley of the Heart,” a 2014 play which had a successful run at the Mark Taper Forum in Los Angeles in 2018.

“‘Valley of the Heart’ is one of my favorite plays,” Cruz said. “I have seen it many times and I think it is just beautiful. He is an intellectual artist or an artistic intellectual—I can’t decide which one. Watching his work and hearing him speak is a gift.”

Cruz is looking forward to presenting her course, which is still open for enrollment through Feb. 12 for anyone interested in attending, including people not enrolled at Gavilan College.

“It is a pretty small class, which is not a bad thing,” Cruz said. “Theater classes tend to be more intimate. Last term I designed it to be an online course and this year I was able to have fun with the structure I created and do more with the parts that worked. I am going to get a chance to try out some new things, which is exciting.”

Students examine the works of Valdez in the context of the Chicano theater movement, which he himself inspired.

“Chicano theater is American theater,” Cruz said. “Growing up around El Teatro, I did not really understand the significance. I learned more in college, where we would be reading serious academic articles in my performance study classes about El Teatro Campesino. I realized it was an important institution. Representation has always mattered, but we are at a point now where we can make representation really happen.”

Cristal González Avila, a producer, director, and instructor with El Teatro Campesino, has participated in classes on Valdez and Latino theater at Gavilan in the past and, for her, the plays retain a strong relevance over a half-century since Valdez began writing.

“Maestro Luis is known for social justice theater, the actos that were born out of the 1965 Huelga,” González Avila said, referring to the Delano grape strike, which inspired Valdez to create El Teatro Campesino. “They are still important because the conditions for farmworkers have not changed much. There are minor gains here and there, but not enough to make a drastic change in their lives.The actos speak to those injustices and day-to-day struggles.”

Autumn Gilbert is a current student in Cruz’s class, and became interested in the work of Valdez after members of El Teatro Campesino came to her class at San Benito High School and performed an early work called “Las Dos Caras del Patroncito,” or “The Two Faces of the Boss.”

“They performed one of the actos and I remember one of the actors wearing a pig head,” Gilbert said. “It was about a terrible boss who was mistreating the farmworkers. After the play, they talked to us about Luis Valdez and his plays as well as films like ‘Zoot Suit’ and ‘La Bamba.’ And I thought, ‘Oh my gosh, he is right here in San Juan Bautista.’”

One of the things that Gilbert is enthusiastic about is the chance to drill down into the plays themselves, an experience she has not had in other classes on theater.

“A lot of the drama classes I have taken are improv-centric or musical-centric where you don’t actually read the play and learn about why it is a great play,” Gilbert said. “Luis has written a lot of great plays and I’d love to learn about the actual structure behind the play and about the history of El Teatro.”

It’s a sentiment shared by González Avila: “Anyone who takes a class that focuses on Maestro Luis will learn a little bit about themselves. His work moves people from the inside out and it reminds us of our humanity. When we start off in college, we are at that tender age when we start to question ‘where do we come from’ and ‘who am I?’ Maestro Luis’s work puts that into perspective.”