The celebratory mood of the event had a serious moment when Supervisor Kollin Kosmicki said he would put his fellow supervisors 'on the spot' for not supporting him in raising the gay pride flag in front of the county building. 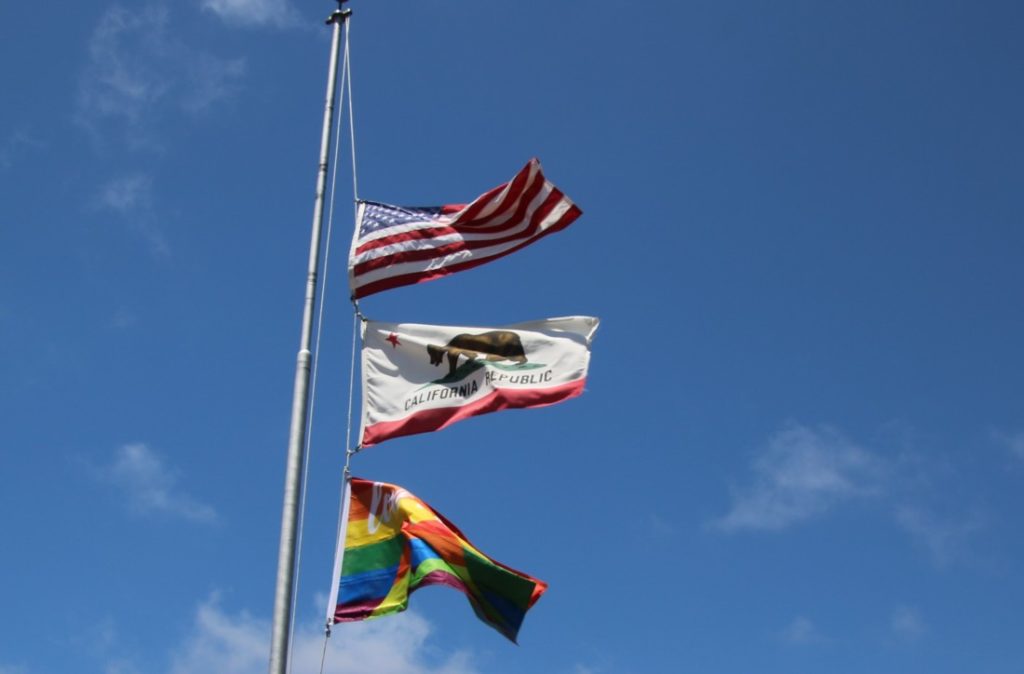 For the first time, the gay pride flag was raised in front of San Juan Bautista's city hall. Photo by John Chadwell. 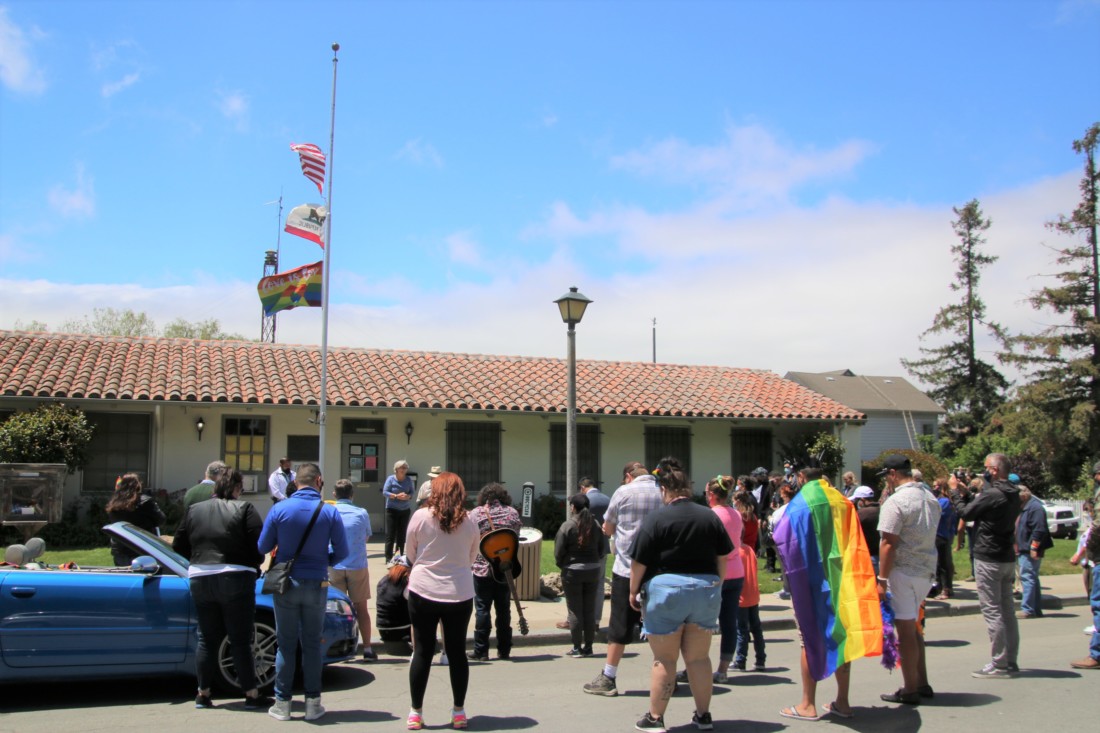 San Juan Bautista City Manager Don Reynolds said the city may have to put up another flag pole next year during the May 29 ceremony. Photo by John Chadwell. 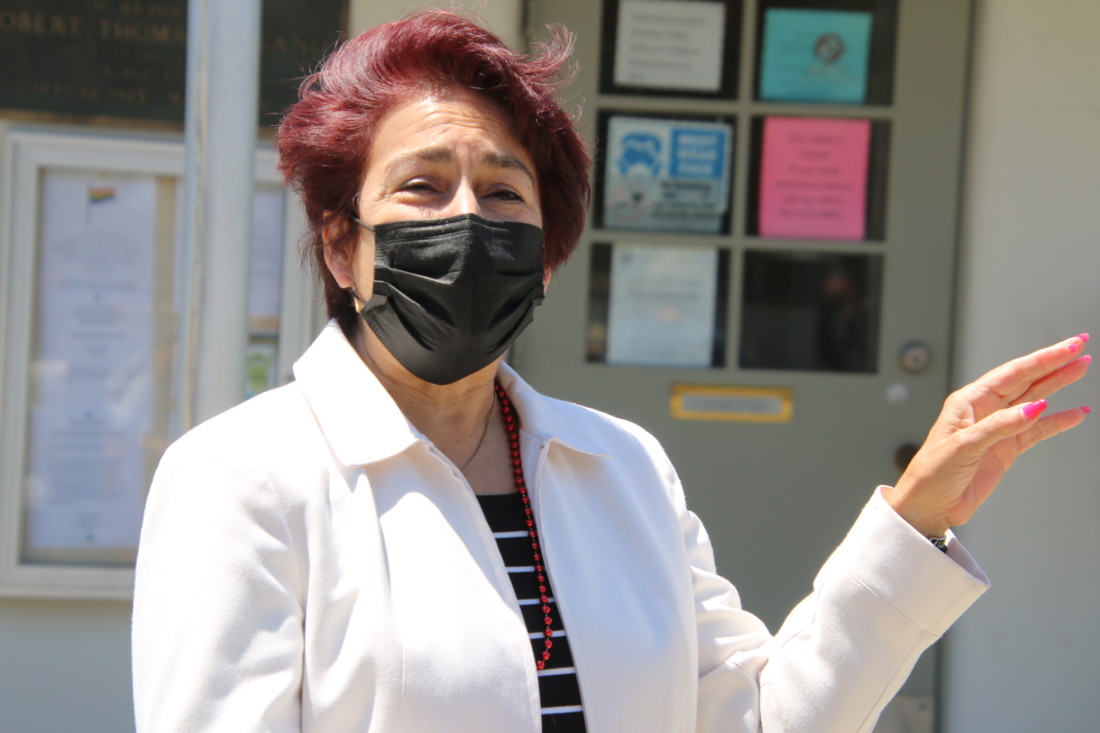 Senator Anna Caballero said she was proud to having served as grand marshal of first gay pride parade in Salinas in 1970. Photo by John Chadwell. 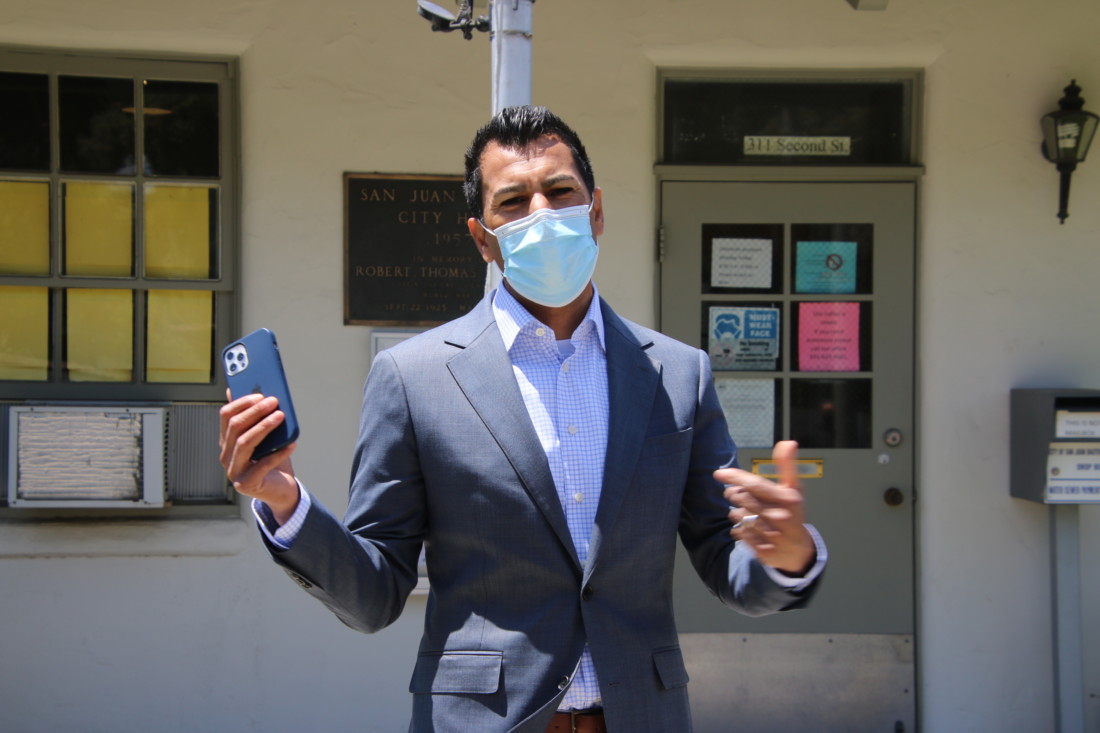 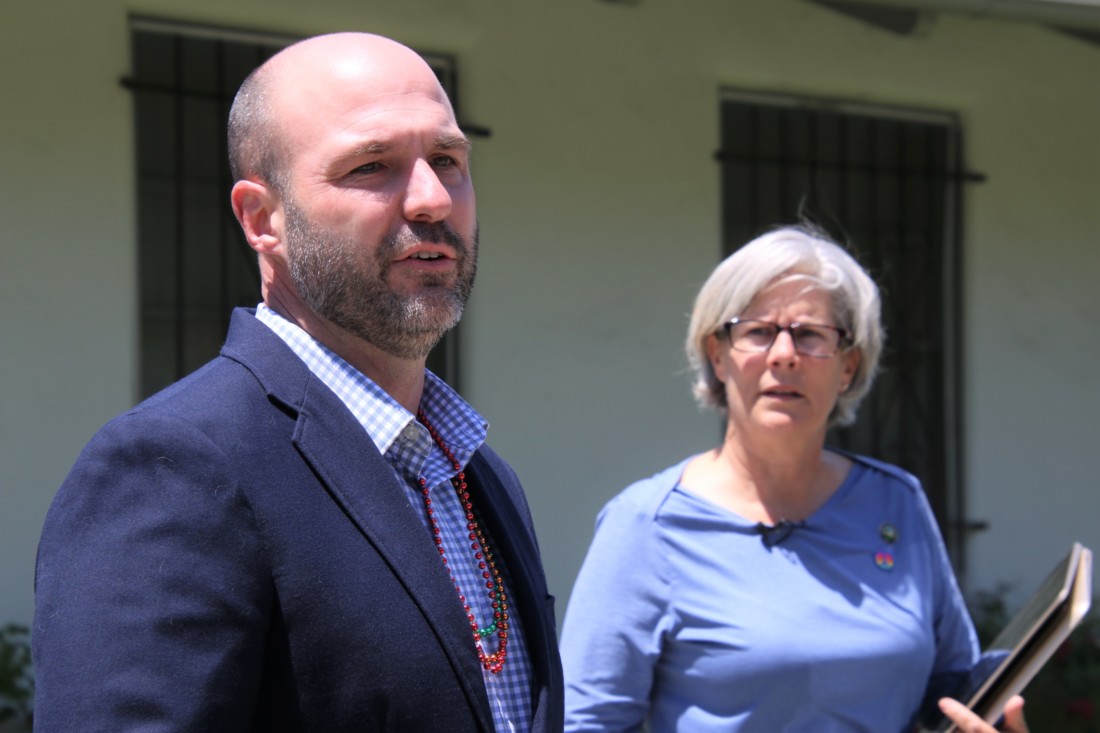 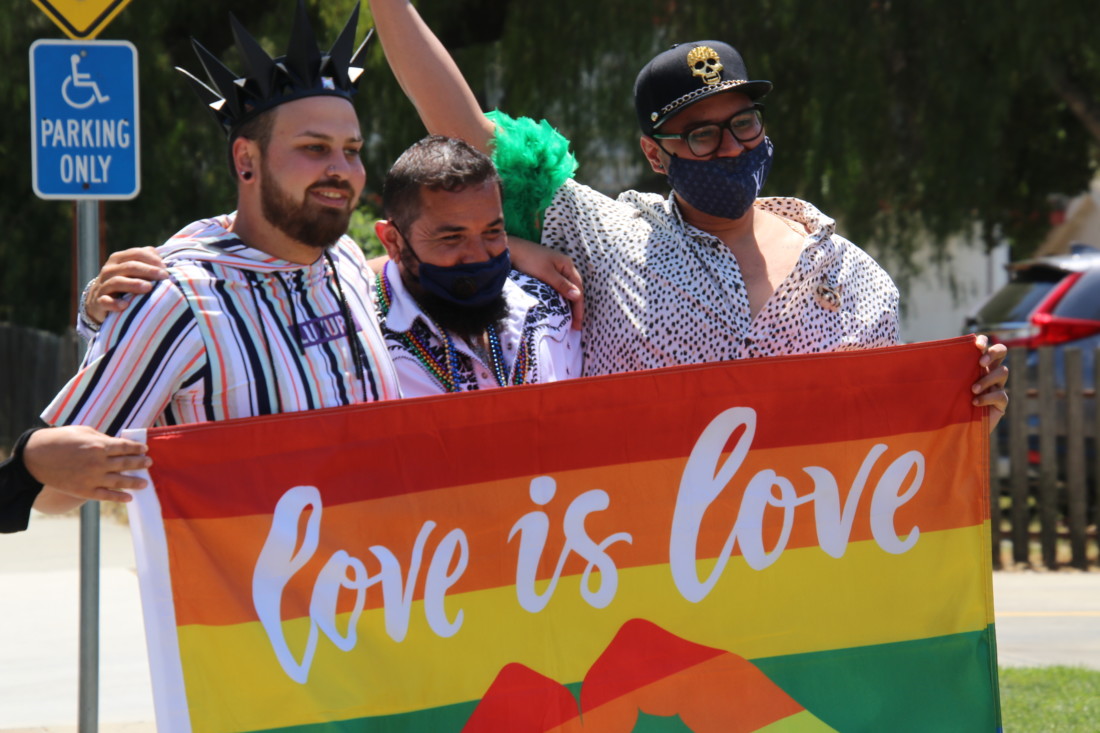 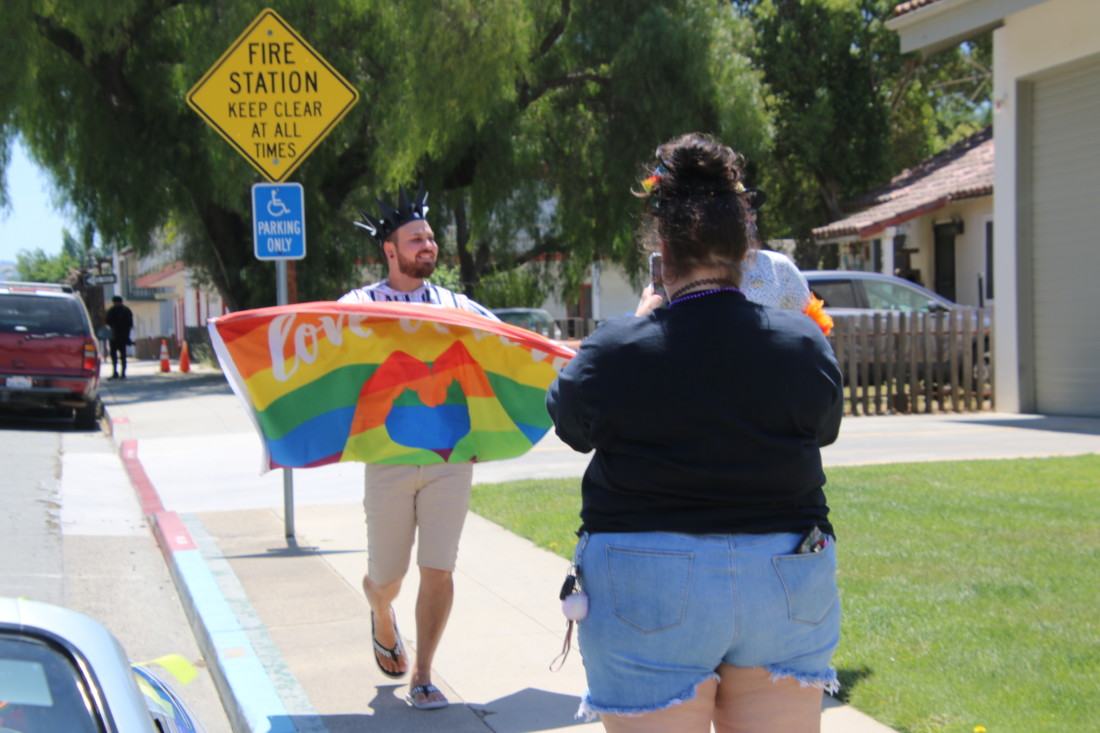 LGBTQ supporters comprised of about 30 residents and a half dozen politicians came together May 29 to raise the gay pride or rainbow flag in front of San Juan Bautista’s City Hall. The flag will remain there for the month of June, which was designated gay pride month in recognition of a 1970 march for the Lesbian, Gay, Bisexual and Transgender Society. The march was in commemoration of the Stonewall Riot that took place June 28, 1969.

Supervisor Kosmicki, however, said even though they were there to show how far society has come, it still had a distance to go. He said when the event was posted on Facebook the comments proved there was “still a level of intolerance and hate.”

“You don’t have to go farther than our own county board [of supervisors],” he said. “On May 11, I proposed that we put something on the agenda to do something exactly like this at the county administration building and a proclamation that supports June as pride month for San Benito County. I didn’t get the three votes I needed for that.”

He said he brought the topic up again May 25. It will be on the agenda June 8. He told those present that he was putting the supervisors “on the spot.”

“We need to have a proclamation on our June 8 agenda to recognize June as pride month in San Benito County,” he said. “I encourage all of you to take part in that meeting.”

“That’s important because we are changing things in San Juan Bautista, Hollister, and next year we’re going to make sure we’re helping Supervisor Kosmicki raise their flag for the entire county,” he said.

Senator Caballero said she was proud to have been the first grand marshal of the gay pride parade [1970] in Salinas and a proud ally of Equality California, a LGBTQ civil rights organization.

Rivas thanked the city staff and mayor for holding the ceremony. He said too many in the LGBT community are homeless and face harassment. He said they must keep pushing so the rural areas of the state have the same resources as urban areas.

Mayor Jordan said the city was founded on diversity and spoke of other marginalized groups of the past who led the way to equality, including indigenous women, and Japanese-Americans, who farmed in nearby fields and where forced into internment camps during World War II.

“It is our time to stand and fight for all of those who have been marginalized throughout the history of San Juan Bautista,” she said. “Thank you for those who gave your lives for what we’re here for, for loving who you want to love and being who you are. Thank you for fighting for our truth.”

While Hollister’s city council authorized up to $40,000 to pay for two flagpoles to accommodate raising the gay pride flag June 1, San Juan Bautista hoisted its gay pride flag up on the single pole beneath the American and California flags. City Manager Don Reynolds said the city issued a proclamation designating June as gay pride month and the council decided to raise the flag even though the city has no policy in place yet to determine which flags can be flown from the single pole. He said San Juan Bautista may also have to eventually erect another pole.