Meritage Homes' Rancho Vista fits in with the company's strategy 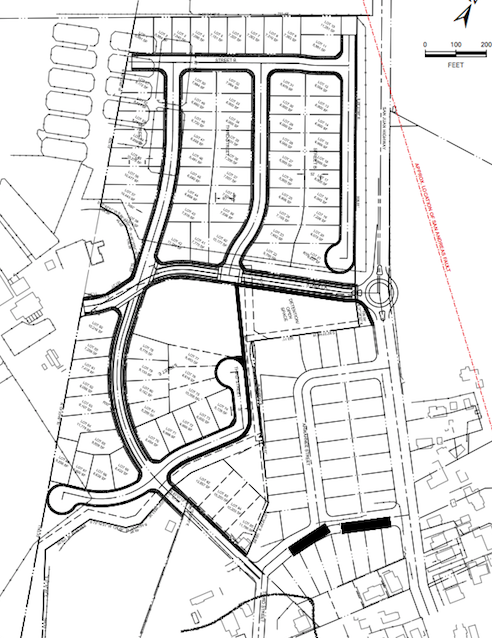 A new housing development in San Juan Bautista has some residents concerned about the scope and impact of the project, located on First Street along San Juan Highway.

The planned Rancho Vista development sits on 28 acres and includes 85 single-family homes. Although it was approved back in 2015, the developer, Meritage Homes, just broke ground last summer.

In August, neighbors attended a San Juan Bautista City Council meeting to voice concerns over the placement of the new homes. Residents questioned whether or not construction matched the approved maps and said the new home sites seemed to be shifting to areas that would affect their views and be out of compliance with an existing greenbelt. Former San Juan Bautista City Manager Roger Grimsley resigned during closed session on the same night, leaving some residents questioning the timing. Grimsley did not return a call asking for comment by the time this story was published.

Meritage Homes Director of Forward Planning Jess Salmon discussed the development with BenitoLink recently and emphasized the company’s commitment to working with the community.

“We recognize development can be shocking, especially for a town like San Juan Bautista,” Salmon said. “We do our best to work with the local community, we’ve done our due diligence and worked with the city to comply with all of their requests. For the Rancho Vista project, we’ve constantly taken public input, worked with the city engineer, city council members and in some cases gone above and beyond the requirements.”

Asked if Meritage would be willing to participate in further community meetings, Salmon said the company has gone through a thorough public input process. "We’ve had our open meetings at the city council. In our minds all of it has been approved. It's been years for the tentative map process and we had public hearings. As a developer, it’s a little unfair to say 'Hey, let’s revisit this again.'"

Salmon added that they have been working with the city for the past year to make improvements to the site drainage and traffic flow. “We’re making progress on the improved plans and making sure we do that properly,” he said.

Meritage Homes has built 75,000 homes in 300 different residential developments over the past 30 years. They operate in nine states: California, Arizona, Colorado, Texas, North Carolina, South Carolina, Florida, Tennessee and Georgia.  According to their website, they’ve been recognized as a leader in energy-efficient designs that focus on clean air, state-of-the art insulation and HVAC systems, and internet connectivity.

The company was featured in a 2013 Builder and Developer Magazine issue that noted their “prominent growth” and named them as a company to watch: “(Meritage) is one single-family developer that is not only building more homes, but purchasing high-demand land in areas coveted by potential buyers.”

Meritage Homes is familiar with the area after developing the Heartland Estates on 48 acres at the foot of Hecker Pass in Gilroy in 2015. That development includes 503 single-family homes in the $800,000 – $900,000 range.

Connie Rogers, a former Gilroy city councilwoman and planning commissioner, worked for years to protect Hecker Pass from development. In the early 2000s the city approved Gilroy Gardens and Eagle Ridge Estates along the edge of the scenic corridor that connects the city to Highway 152. Rogers said it was only a matter of time before other developers came calling.

“Hecker Pass was always a very special area and basically in agriculture until around 2000,” Rogers said.  “I could say that nobody in Gilroy really wanted to see it developed because we think Hecker Pass is very scenic and historic. But once the city approved some development, there was bound to be infill. You don’t want little islands of developments.”

Rogers worked with a group of agricultural land preservationists and the city to protect the corridor’s cedar trees and had them registered on the National Register of Historic Places. She stressed the importance of working with developers and government to set high standards and stick to them.

“You have to have the right rules in place ahead of time,” Rogers said.  “Once a project is approved, there’s nothing really you can do, except hold them to a higher standard.  I would hope that the San Juan city government would say to Meritage ‘We are a very special, unique city and therefore we deserve special treatment and will uphold very high standards.’ It all comes down to enforcement.”

Gilroy's Heartland Estates project, which filled in remaining open space at the foot of Hecker Pass, was the result of years of planning. “Meritage did what appears to be a really nice job there,” Rogers added. “There have been some complaints about drainage and construction happening outside of approved hours, but I think those things have been addressed.  If you’re already in a neighborhood where people are living you have to be sensitive to their concerns.”

San Juan Bautista's unique charm and small-town appeal is one of its selling points. Historically, the city has resisted modernizing, holding  on to its identity as a "The Mission City" and "The City of History." Allowing the Pizza Factory restaurant to open in the Windmill Market shopping center in the early 2000s was the first time residents allowed a chain store in the city. As the reach of the Silicon Valley's residential needs stretches further south, San Benito County has shown up on developers' radars.

Salmon said they hope to start selling at Rancho Vista next spring. "We're still working on site improvements. Once those are complete, we'll build the model homes for people to see," he said.The plans currently call for single-family homes with four bedrooms, three baths, and two car garages.