After confusion over expiration date of contract between hospital and local doctors' association, Hazel Hawkins district board chose to rescind termination notice to continue negotiations. 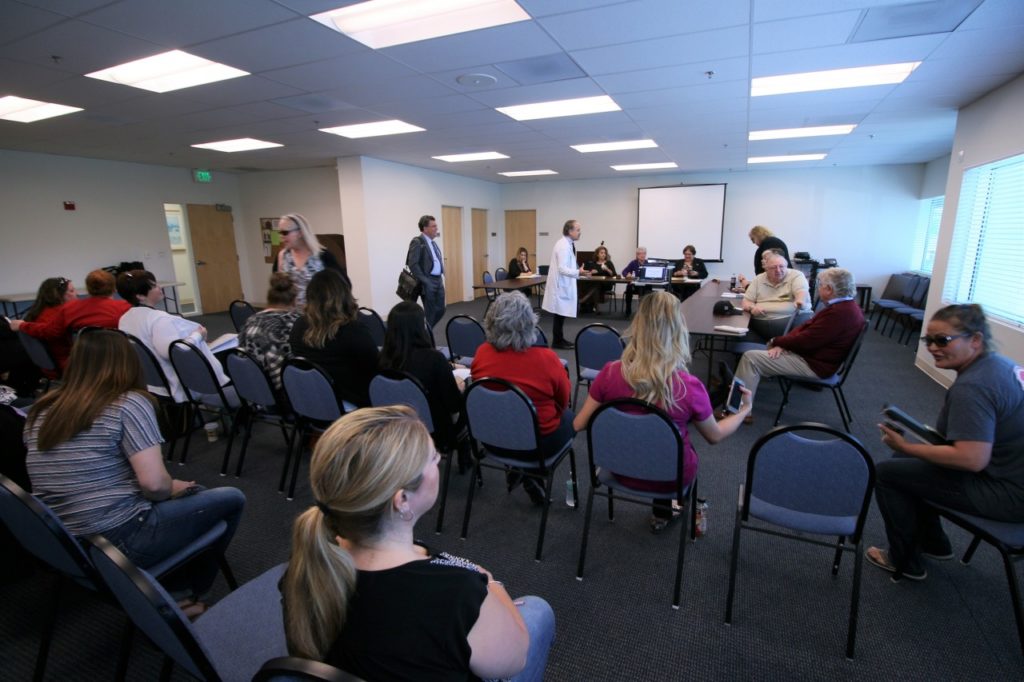 After a unanimous showing of hands from the Hazel Hawkins nursing staff in support of switching the third party administrator from Pacific Health Alliance (PHA) to HealthComp, which coordinates health plan claims and services for them, the hospital’s executive board of directors also voted unanimously to make the change official.

Hospital board member Dr. Aerial Hurtado recused himself from the April 27 meeting because he is also a member of the San Benito Medical Association (SBMA), which, along with PHA, is the primary health plan provider for the nurses.

The nurses were seeking the change primarily because they were dissatisfied with PHA’s customer service and lack of computerized recordkeeping, which they claimed caused unacceptable delays in treatment.

What seemed pretty straightforward, however, evolved into confusion regarding exactly when the joint contracts with PHA and SBMA (an affiliation of about 130 San Benito County physicians and specialists) would expire. During the meeting, April 30 was mentioned numerous times as the expiration date, but within days after the meeting, Dr. Parveen Sharma, a member of SBMA and a former hospital board member, claimed the actual date was Jan. 1, 2018.

“They didn’t realize that and thought they could give us notice now and finish the contract by July,” she told BenitoLink on May 1. “If you read the contract, it starts in January. They can’t do it for another seven months, and a lot can happen in seven months.”

Sharma contended that the hospital was at fault over the confusion because they “don’t look very deep" and blamed, in particular, Lynn Gomez, vice president of the human resources department.

“She has never done a healthcare contract before,” Sharma said. “She (Gomez) said they have three months’ notice and they’re (SBMA) out in July.”

“The attorneys told us ‘unless they say something or find out, keep quiet about it,’” she said. When asked why the attorneys would suggest keeping the information from the hospital, in what Hollister resident Marty Richman, who was at the meeting, described as bad faith in the negotiations, Sharma responded, “We didn’t want them to know about it. There was no point bringing it to their attention if they didn’t find it. We don’t want the contract to be finished.”

Sharma claimed the hospital representatives made a foolish decision in deciding to terminate the contract with SBMA because the association’s members who treat the hospital’s employees always refer them back to the hospital.

“Not only the hospital staff, but if I saw somebody from Los Banos, I made sure they do their surgery in this hospital,” she said. “That’s the persuasive power that a physician has over their patients. If they’re happy they will go wherever the physician is happy.”

Sharma said SBMA’s geographical area of influence has expanded over time, attracting patients from “Gilroy, Salinas, from Los Banos, Fremont and Merced, and I direct them all to the hospital.”

She said from the beginning the relationship between the hospital and SBMA the goal was to keep medical dollars spent within the county.

“That purpose will be defeated,” she said. “They’ll (hospital employees) be able to go anywhere they like.”

When Sharma was informed that the nurses and hospital board had voted unanimously to change health plans, she said the hospital was being naive because the nurses want to be free to go wherever they want for medical care. In Nov. 2016, Sharma, as a member of the hospital board, voted against renewing hospital CEO Ken Underwood’s contract and objected to a 12-month severance pay stipulation and that the contract was too lucrative.

When it was suggested to Sharma that the hospital’s motive might be that it was taking the desires of the staff into consideration, rather than economics, she reasoned, “The hospital has 32 days cash on hand. If they don’t get paid in 32 days, it’s curtains. This is the amount of money that’s liquid that they can use if everyone stops paying them. That would be the number of days they could survive.”

Mark Robinson, the hospital’s chief financial officer, told BenitoLink initially that he did not know where Dr. Sharma got the January 2018 expiration date for the contracts. He said the contract with SBMA/PHA expired Dec. 31, 2016, and that for the last four months the hospital extended it twice, once through February, and once through April, in order to continue negotiations.

“April 30 was when we were looking at the end date,” he said. “The board decided in order to have time to go to HealthComp we would let the agreement go through to June 30, 2017. There is some discussion with SBMA in the contract that we notified them in the appropriate way.”

He maintained that the hospital was trying to be accommodating to all parties and that if the contract with PHA/SBMA ended in June, there would be no lapse in coverage for the employees.

“HealthComp currently processes claims for the hospital,” Robinson said. “If I get an X-Ray, PHA/SBMA pays the radiologist, but HealthComp pays the hospital for the X-Ray being taken. Then on July 1, HealthComp would just start paying all claims. Within 60 days everyone would have one card, one contact and one authorization number.”

Addressing Sharma’s comments about the logic of moving patients away from the county causing the hospital to lose money, Robinson said the issue that was discussed at the meeting—none of the SBMA members, (other than board member Dr. Ariel Hurtado, who recused himself) attended—concerned the employees dissatisfaction with SBMA’s lack of customer service and modern recordkeeping capabilities.

“The decision the board made unanimously was in support of the employees who don’t see the value of SBMA/PHA overseeing their health plan,” he said. “The unions were not happy with the service provided.”

Robinson said there were discussions during multiple board and committee meetings addressing how the employees felt and that during a recent special meeting, physicians and employees had the opportunity to speak before the board. He said it was disappointing when SBMA did not show up at the April 27 meeting.

Regarding Sharma’s assertion that Gomez was responsible for the confusion about expiration dates and the contracts, Robinson said the contract had existed and had been amended numerous times, long before Gomez came to work for the hospital last October.

“None of it has anything to do with Ms. Gomez,” he said. “Only through the direction of human resources she has to handle complaints from employees about the plan. This plan was done at a higher level.”

When told it was understood from comments attributed to Underwood that the contract would expire Dec. 31, 2017, Robinson said he remembered the date being discussed with SBMA in the hope that it would finish out the calendar year. He conceded that there might still be some confusion over the dates. He later provided a copy of the agreement to BenitoLink and further stated by email that the contract ran from Jan. 1, 2016 to Dec. 31, 2016 (essentially Jan. 1, as Sharma contended).

“I believed we were extending the agreement through verbal communications between Dr. (Martin) Bress (president of SBMA) and Dr. Larry Cappel (also of SBMA) in meetings that I attended,” he wrote in the email.

Robinson commented about the wording in the agreement that he thought Sharma was referring to that indicated the plan would run a full 12 months and could be terminated by either party at the end of the plan year, but only after giving 120 days written notice.

Prior to Sharma’s assertions, Cappel sent a letter to the board before the April 27 meeting where he challenged the hospital employees’ understanding of how SBMA serves them.

“It is our strong belief (supported by all data) that the program as operated is the most efficient,” he wrote to the board. “It is the vehicle to ensure continued utilization of the hospital and all its services and specialists. Coupled with the current PHA utilization management and redirection services, the program is the only program that does exactly what SBMA, the hospital specialists and the hospital need—(provide) a strong, unified system that encourages use of the local hospital and physicians.”

Cappel’s reasoning did not sway the hospital’s nursing staff, and after considering three possible health plans, the staff and board voted unanimously to change the health plan administrator to HealthComp, which will allow staff to go to any doctor or facility in or outside of the county, which is what SBMA claims will ultimately affect the hospital’s bottom line.

“Why would anyone want to come to this hospital if they have the option to go somewhere else?” Sharma said. “There’s a big conflict and what does the hospital gain? They only gain by keeping them here. But we never kept them here if we couldn’t provide the services.”

“At the Monday, May 8, 2017, District Board meeting, the board members voted to rescind their termination notice that was approved during the April meeting,” he wrote. “This was done so both parties could have time to negotiate the terms of a future agreement. The district is committed to working with all stakeholders within its boundaries.”

On June 9, Brandy Colbert, a registered nurse at Hazel Hawkins and a union leader, said that while the nursing staff supports the hospital the main reason they voted to change health plans was because referrals and treatments were being denied by IPA.

“The decision on someone’s health care shouldn’t be made by one person who can decide whether you live or die,” she said. “There isn’t a board making these decisions. It’s just one person.”

She said the treatment of patients is a collective effort and that at Hazel Hawkins it has come down to one person making the decisions. She said the nurses understand occasional clerical errors, but for so many nurses and other hospital personnel to be affected by decisions not to refer them to other practitioners was unacceptable.

“So, we and the board voted unanimously to change providers,” she said. “Now some of the SMBA members are threatening to pull out of the hospital. This is a small community and we have well qualified physicians, but for a couple of them to want to pull out because we’re dissatisfied with the level of service is not right. They’re strong-arming the employees.”

She claimed some of the physicians are willing to let the community suffer because of the decision the employees made to change providers.

398 people have tested positive since February, 78 are active patients, 318 have recovered and two have died.