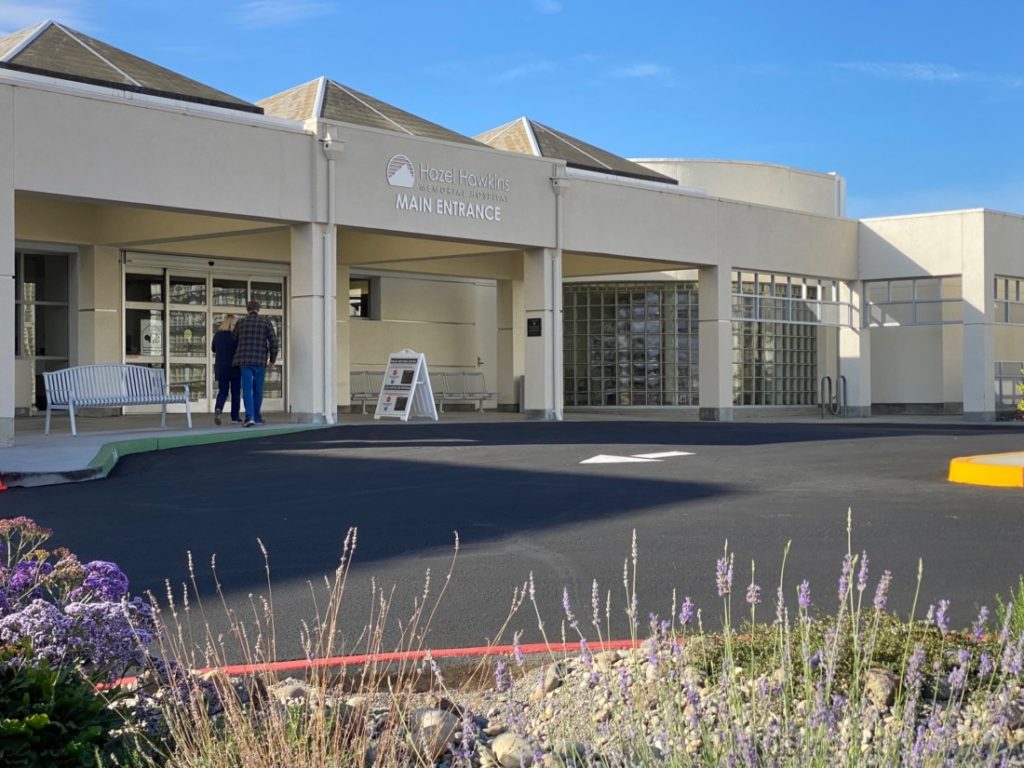 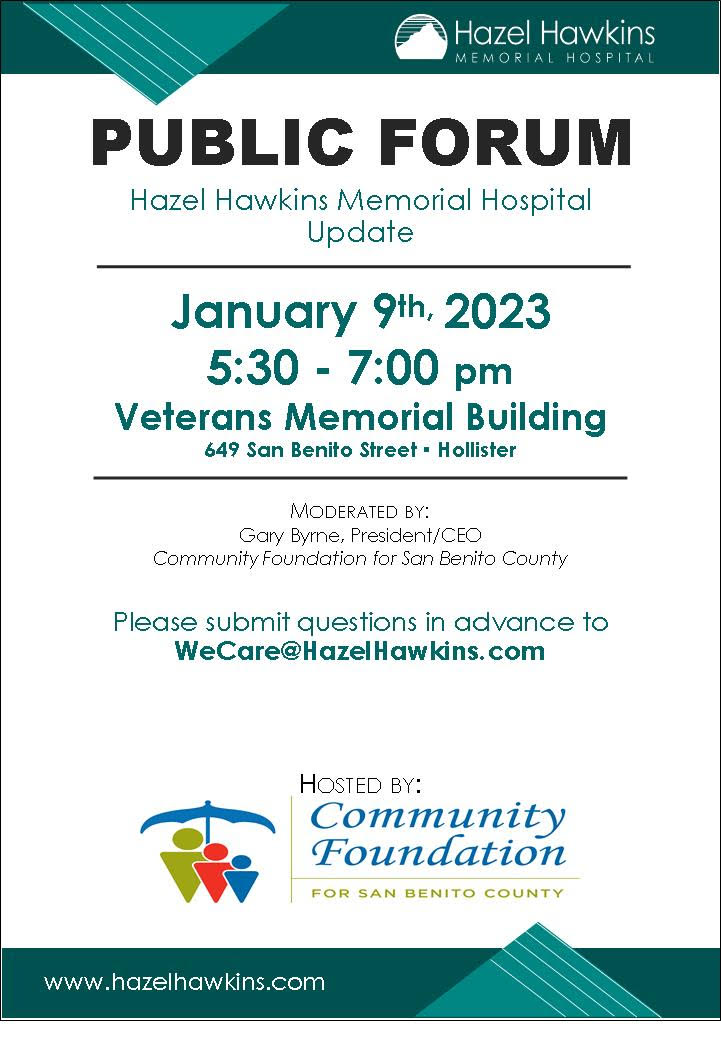 Editor’s note: The event was postponed because the building is being used for evacuees from flooding areas in the county. Last updated 4 p.m.

The Community Foundation for San Benito County announced it has postponed the public forum for Hazel Hawkins Memorial Hospital to provide updates to the public on its financial emergency status.

The forum was scheduled for Jan. 9 at 5:30- 7 p.m at the Veterans Memorial Building at 649 San Benito Street in Hollister and moderated by Community Foundation CEO/President Gary Byrne.

The announcement invited the public to submit questions in advance at [email protected] BenitoLink will cover the forum and, weather/power permitting, will provide it on BenitoLink’s Facebook channel live.

On Nov. 4, the San Benito Health Care District, Hazel Hawkins’ governing board, declared a fiscal emergency, allowing the district to file for Chapter 9 bankruptcy. In that meeting, Chief Finance Officer Mark Robinson told its board of directors Nov. 4 that several factors led the hospital to need the option of filing for bankruptcy. Those factors which included an obligation to return over $12 million to the state this fiscal year, an Anthem Blue Cross reimbursement dispute and a delay in supplemental payments totaling $13 million due to the hospital from the state.

The hospital asked the county for a $10 million loan. On Dec. 15, the San Benito County Board of Supervisors approved a $2.24 million advancement to the hospital in property tax revenues but the hospital was due 50% of that amount by the end of the month regardless of the supervisor’s vote.

On Dec. 19, the hospital sent notices to its employees of possible mass layoffs and possible closure. According to the notice, the hospital said it has enough funds to operate until Feb. 18. The notice stated that the Worker Adjustment and Retraining Notification (WARN) Act can be extended or retracted if Hazel Hawkins is successful in finding funding. The hospital said it needed to come up with an additional $25 million to avoid bankruptcy.

On Dec. 28, Hazel Hawkins announced a new reimbursement agreement with Anthem Blue Cross. The new agreement took effect Jan. 1. BenitoLink has requested but not received more information on the agreement and how it will impact the hospital.

The hospital has been “out-of-network” for Anthem PPO members since Aug. 10, 2022. During negotiations, Hazel Hawkins said Anthem was refusing to “appropriately pay Hazel Hawkins Memorial Hospital for health care services.”

Anthem said it “offered reasonable increases that are in line with what other provider partners receive for the same services.”

Before the hospital declared a fiscal emergency, it terminated its contract with then-CEO Steve Hannah on Oct. 14. that included $360,563 in severance pay. Hannah’s contract expired June 30, 2025.

In an exclusive interview, Hannah told BenitoLink in July 2022 the hospital has until 2030 to make its current building capable of surviving an earthquake of 8.0 magnitude on the Richter scale. Hannah said the hospital needed to expand and is looking to build a new $250 million hospital. With board approval, the hospital also purchased the Oasis Fitness building at 190 Maple St. near the Hollister Post Office for $1.9 million in cash on April 20, 2022.

On Aug. 12,  The California Nurses Association announced registered nurses at Hazel Hawkins were given a new four-year contract July 28 that included a 12.5% across-the-board wage increase, beginning with 3.5% in the first year of the new agreement. 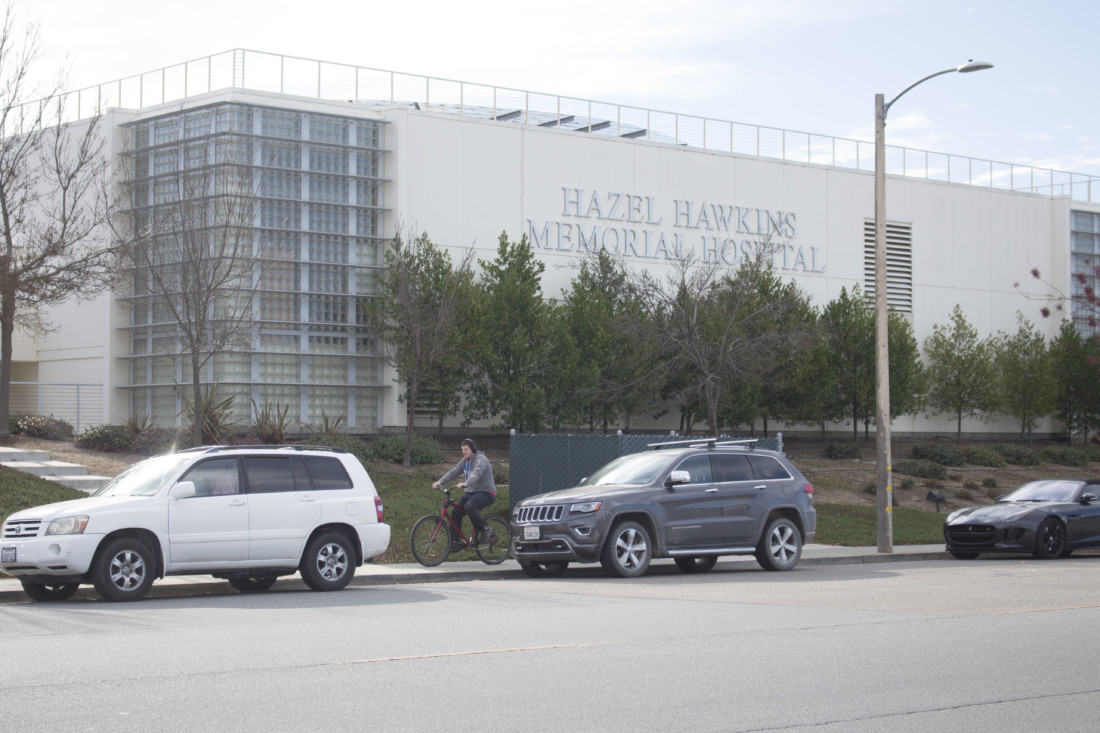 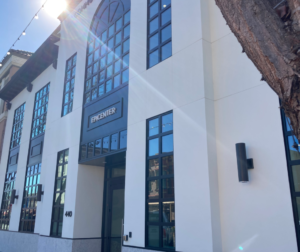 The listening session to focus on Alzheimer’s, dementia, memory loss and services. 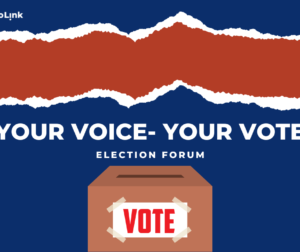 BenitoLink Your Voice- Your Vote Election Forum set for Oct. 11

BenitoLink invites the public to a free, nonpartisan general election forum that will be in-person and will also be available on video after the event.