The Agricultural Commissioner's Office and California Certified Organic Farmers are investigating the incident. 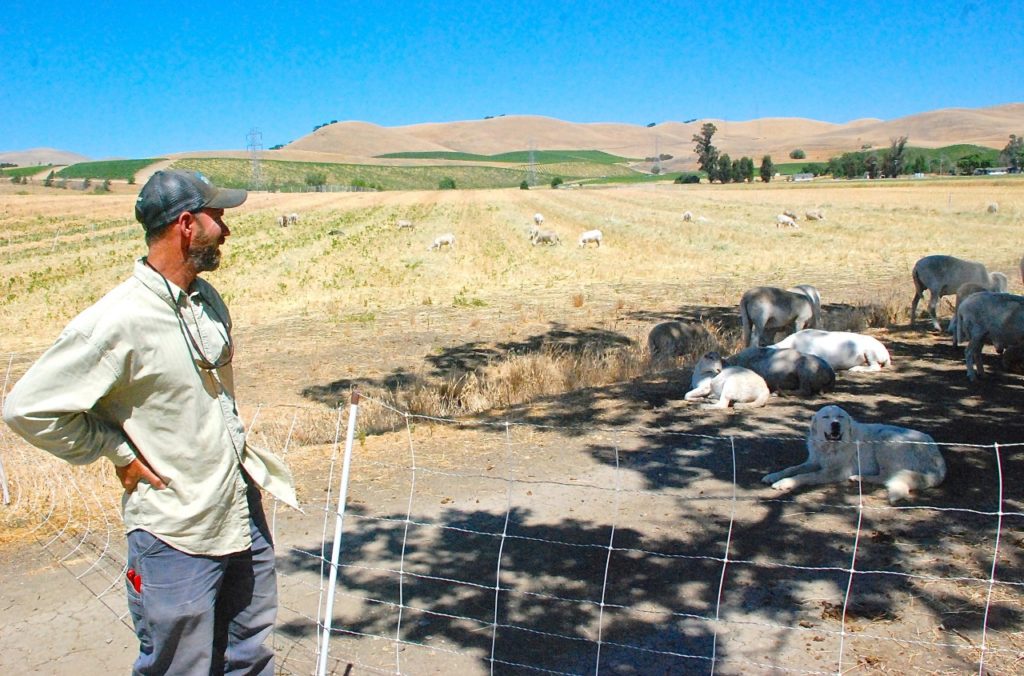 Kelly Mulville stands near sheep at Paicines Ranch in Paicines on June 14. Herbicide sprayed on weeds along Cienega Road in April by a San Benito County Public Works crew drifted onto the organic ranch. An investigation is underway. Photo by Tom Leyde. Drift from herbicide applications by San Benito County Public Works Department crews along roadways may have jeopardized the certified organic status of a farm.

“We’re trying to figure out what we need to do here,” Ranch Manager Kelly Mulville said. “The owner has talked to people at the county. We are considering legal action.”

The off-target incident is under investigation by the San Benito County Agricultural Commissioner’s Office and California Certified Organic Farmers (CCOF), the agency that certifies organic farms on behalf of the U.S. Department of Agriculture.

Mulville, who filed a complaint about the incident with the county public works department, said he reminded the county in the past not to spray herbicides near organic fields. It is not known why the county continued spraying the area.

“It brings up some big questions,” Mulville said. “Why is the county spraying toxic substances all over the place? As long as you spray weeds you’re guaranteed to have weeds to spray.”

Paicines Ranch has been certified organic for a little over 10 years. In order to be certified organic, land must be free of herbicides and pesticides for three consecutive years. The land affected by the herbicide is grazing land, Mulville said. If land is decertified organic, it is taken out of production for a full three years before it can be recertified.

About 1-¾ miles of pasture along Cienega Road will now need some sort of buffer to keep cattle from grazing there, Mulville said. He is considering how to do that.

A county public works report issued May 7 states that 160 rights of way were sprayed in 16 applications on April 20. The chemicals used according the report were:

“We estimate approximately one-quarter acre of direct damage to the pasture forage, however, we too realize that the forage effected (sic) is contiguous with the rest of the pastures on the ranch," the report stated.

In May, the Agricultural Commissioner’s Office generated a notice of violation for San Benito County Public Works.

Overstreet said her office is in the middle of its investigation of the incident.

“We’re looking at everything right now,” Overstreet said. “Because we’re still in the middle of it, sometimes we don’t know where it’s going to take us. Depending on what we find, it could have a penalty. We try to take care of these things as soon as possible. We’re waiting on details. It’s moving along the process at this point."

During her three years as agricultural commissioner, Overstreet said an incident like this has not occurred in the county.

Ann Baier, independent contractor for California Certified Organic Farmers, is investigating the incident for that agency. She said her report is confidential and could not elaborate on her findings.

Kelly Damewood, director of policy and government affairs at California Certified Organic Farmers in Santa Cruz, said the group’s investigators look at a wide range of factors when reporting on incidents like pesticide drift. Factors include who sprayed the herbicides, signage, and whether the spraying was intentional or inadvertent.

“Mistakes happen,” Damewood said. “This is unfortunate and challenging for the producer.”

California Certified Organic Farmers will look at whether the county spray crew checked lists of organic farms in the area before spraying, Damewood said. Those lists are readily available at the county Agricultural Commissioner’s Office, which registers all organic operations.

Damewood said California Certified Organic Farmers works to educate counties and other agencies to help protect organic producers. If an organic crop is inadvertently sprayed by herbicides or pesticides, she said, the crop would not be marketable.

An organic farm likely would not have its organic certification removed unless pesticides or herbicides were intentionally sprayed on fields or crops, Damewood said.

“We’re going to work with the agriculture commissioner to preview the (spraying) program," Guertin said. That will include educating spraying crews and communicated better with the ranchers in areas that are sprayed.

Meanwhile, Mulville is awaiting the findings from the investigation.

“It was a tragedy, for sure,” Mulville said. “But it brings up, why are we doing this (herbicide spraying) at all? Why are we supporting this? Why don’t we just eliminate it from practice in the county? It would save us money and it would protect our environment, and there are better ways to deal with this.”