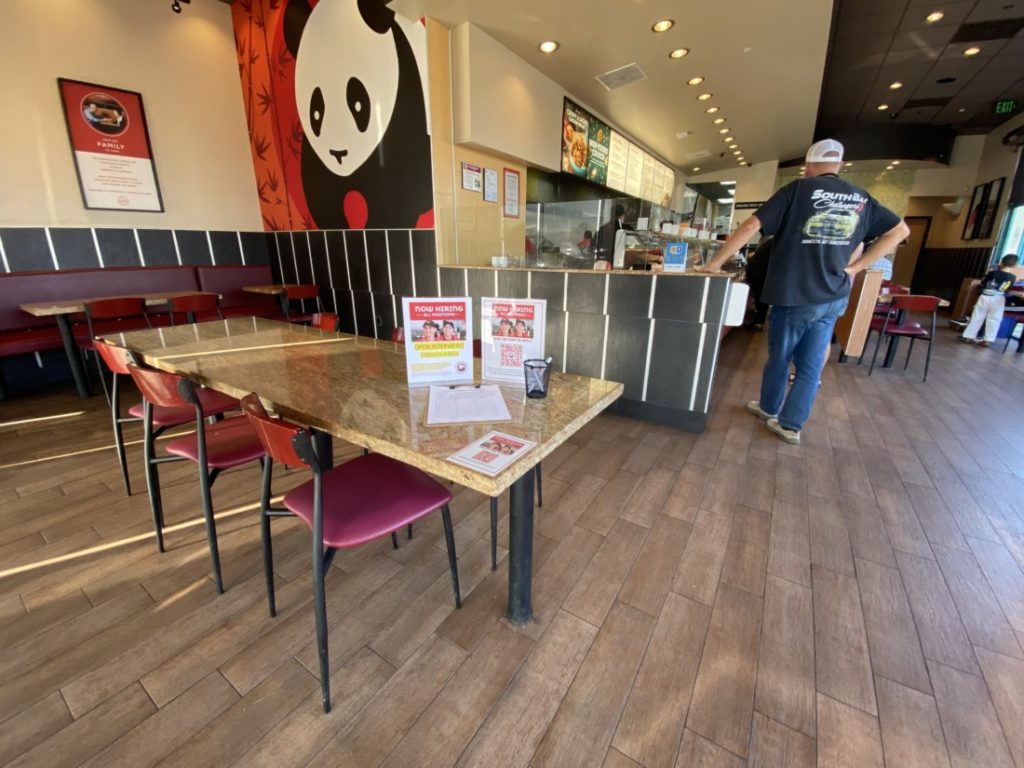 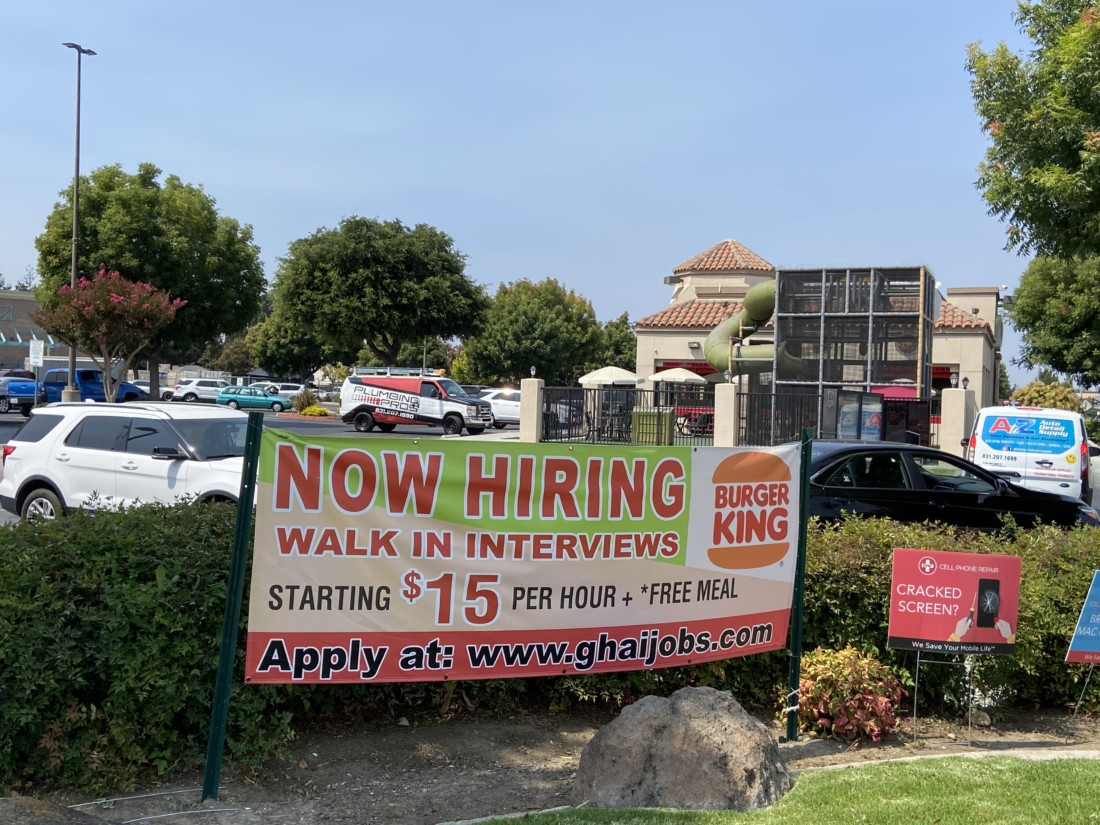 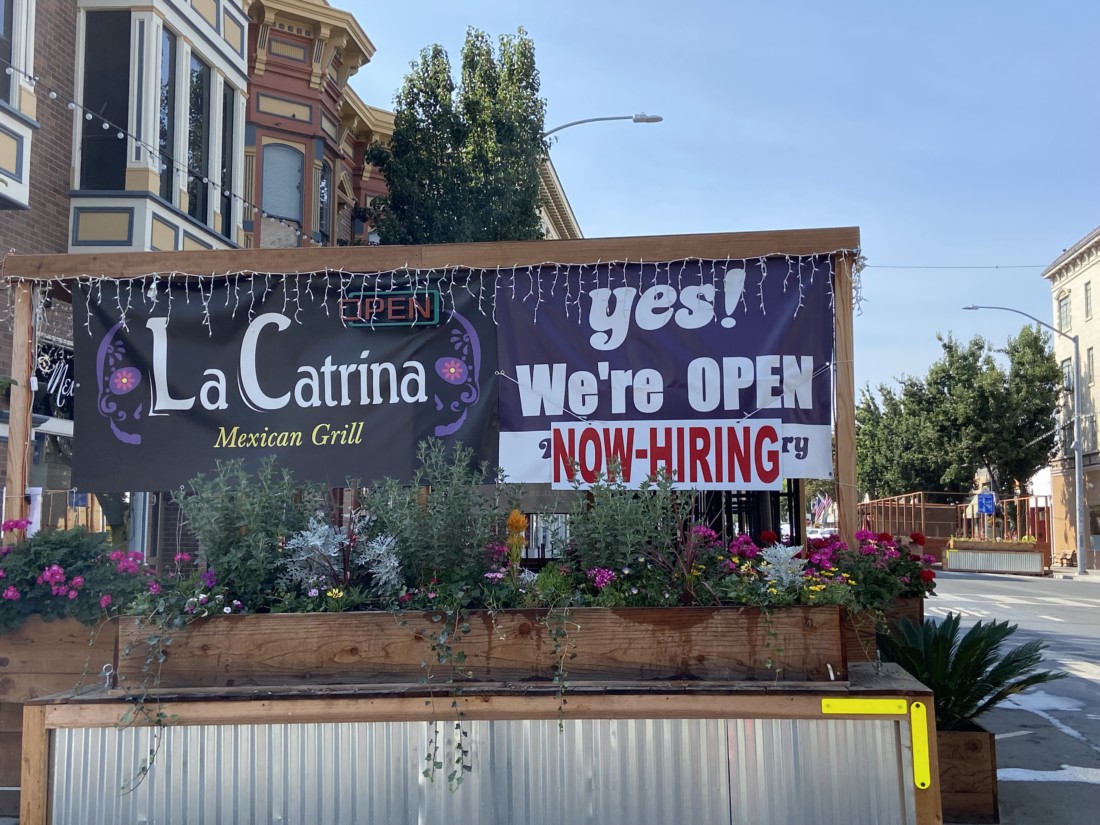 Restaurants in Hollister and San Juan Bautista are now hiring and have had to get creative ways to attract applicants.

For instance, the line to order at Panda Express in Hollister also became a spot to apply for multiple positions at the restaurant chain: a sign-up sheet offering open interviews was set on a dining table right at the entrance. And across the shopping complex on Airline Hwy, Burger King boasted a bright sign stating “Walk-in Interviews: Starting $15 per hour + Free Meal.”

According to the State of California’s Employment Development Department (EDD), data from July shows that while 7.6% of Californians were unemployed, approximately 2,300 San Benito County residents (7.2%) were among them.

Why are so many jobs available in the restaurant industry? And why has brazenness and incentivizing become necessary?

Lance Ramhurst, general manager and head chef at Running Rooster, said that after speaking to restaurant vendors and other restaurant managers, he concluded that “people have either lost their work ethic or have lost their love of the restaurant business.”

He also noted that the possibility of another shut-down for restaurants, caused by the delta variant, could be another reason why people are seeking employment elsewhere. Ramhurst said a lack of incentive for people to find work outside of the home could also be a factor.

“I think people have enjoyed being home,” he said. “Either they’re getting money from the government or they’ve found a new job. And a lot of companies are now offering work from home as an incentive. I think what’s the hardest is that we’re not getting any applicants.

It’s not like we even get to sort through the good ones from the bad ones.”

Exposure to COVID-19, or the delta variant, can also be a reason why the unemployed have been hesitant to seek new jobs.

“With this delta variant, we don’t know if people are scared to come out again,” Ramhurst said. “There are so many unknowns.”

Jardines de San Juan in San Juan Bautista is also seeking new hires. And Gabe Ramirez, the restaurant’s operations manager, said his establishment isn’t the only one that needs staffing in SJB.

“I know Doña Esther’s right across the street is hiring and the Pizza Factory has had their hiring sign up,” he said. “I think just line cooks in small rural areas are really hard to come by.

People are more willing to drive towards San Jose to get a higher minimum wage than to stick around in the San Juan Bautista, San Benito area.”

Gustavo Gonzalez, manager of Hollister’s La Catrina, says he is grateful for the parklet outside of his restaurant, and found that he has needed more staff to service it.

“Right now we need waiters in the front,” Gonzalez said. “It takes more time to take the food from the kitchen to the parklet. We need someone watering the plants, cleaning the tables outside, and cleaning the street and mopping the parklet.”

Togo’s owner Tony Hardin has had fewer adults apply to work at his Hollister restaurant, leading to a shortage of daytime staff.

“We’ve tried incentives,” he said. “I began to pay $2 more an hour than minimum wage. And then I drove around Hollister one day and talked to some businesses—well everyone’s paying $15 now. But you’ve got to be careful with incentives, because if I said ‘I’m going to give a new employee that stays three months $200,’ what about my employees that have been here a year or two? How are they going to feel about that?”

“I had five interviews set up one day and only one of them showed up,” he said. “I just happened to call one of them and said, ‘I’m just curious why you didn’t come in.’ He said he needed proof that he was applying for jobs for unemployment.”

According to the National Restaurant Association, “75% of restaurant operators reported that recruiting employees was their top challenge as of June 2021—the highest level ever recorded.”

Tom Bené, president and CEO of the National Restaurant Association said that restaurant operators, along with the supply and distribution chain, have remained focused on adapting to—and even exceeding—the expectations of diners. However, with the rising food and labor costs related to the pandemic, he lamented that “the outlook through the end of the year is one of cautious optimism.”

Unfortunately, Ramhurst has felt what he calls a “trickle-down effect.”

He said that prices are higher now than they were when he purchased from food distributors. “So the cost of our products are going up, but we’re still charging the same. All of these trickle-downs are affecting businesses in so many different ways.”