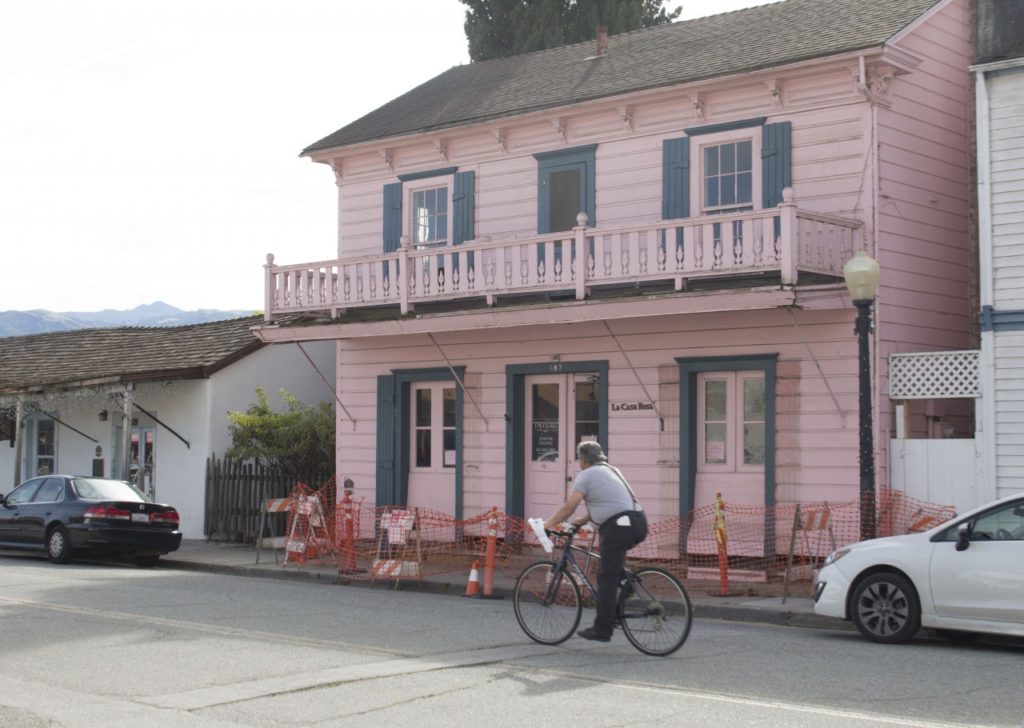 A cyclist rides past La Casa Rosa in San Juan Bautista, where the sidewalk is blocked. Photo by Noe Magaña.
×

The San Juan Bautista City Council took steps toward repairing the balcony of a historic building by declaring it a nuisance.

Residents and tourists have not been able to walk by La Casa Rosa at 107 Third Street since the city closed the sidewalk under its balcony last September after receiving a safety complaint.

At a Jan. 22 special meeting, Mayor Cesar Flores said that the owner sent the city a letter stating he was not going to fix the building.

By declaring the property a nuisance, City Attorney Deborah Mall said the city can repair the balcony after holding a hearing and placing a lien on the property. Completing repairs would allow the city to open the sidewalk in front of the historic building. An engineering report attached to the meeting agenda packet proposes to install posts at each brace location to secure the balcony until long-term repairs can be made.

La Casa Rosa, built in 1870, was purchased in 2016 by Greg and Christin Burda. They also own The Flower Girl flower shop in town. The building’s interior was demolished for a planned restaurant and apartment, and though the San Juan Bautista Historic Resource Board and Planning Commission approved a site design for the property in April 2017, no building permits were submitted or approved, according to a Dec. 18 engineering report. Work on the building was stopped in April 2018.

Mall said the most effective way to penalize the owner for the damages to La Casa Rosa was through citations that could amount to $30,000. But Councilmembers John Freeman, Dan DeVries and Mary Edge asked for an analysis to help determine whether the city should allot the time and money to sue the Burdas.

Mall added that the city would not be responsible for the cost of restoring the building. If the property is sold, the new owner would have to repair the building and the cost of securing the balcony would be refunded to the city through taxes.

San Juan Bautista resident Mirjana Tomas urged the council not to allow the negligence of past councils continue and to hold the Burdas accountable.

“We need to find the money to go after them,” Tomas said. “We are accepting so much that everybody thinks it’s perfectly okay to come into San Juan and rip it off any way that they feel like.”