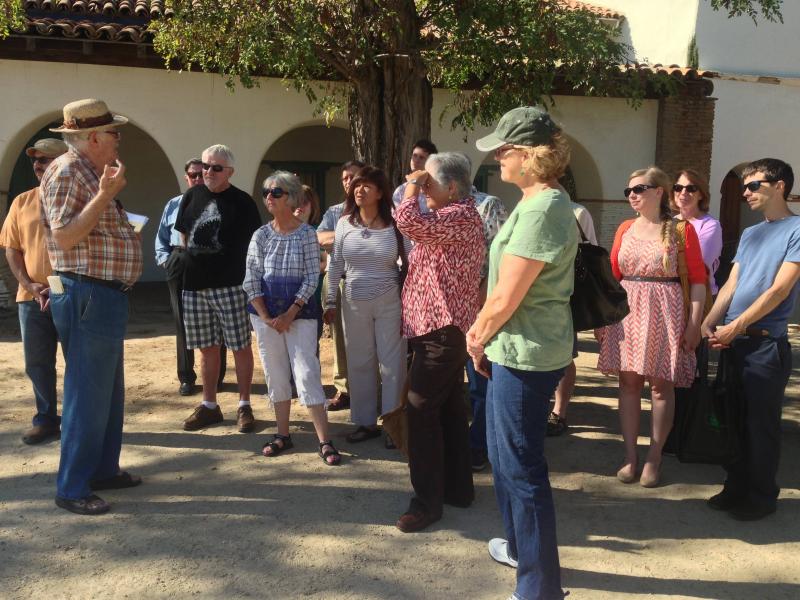 Hitchcock enthusiasts from far and near gathered in San Juan Bautista to enjoy a day devoted to Alfred Hitchcock and the filming of his famous film, Vertigo. San Juan Historical Park Docents led sold out tours scenes featured in Vertigo, Hitchcock's film starring James Stewart and Kim Novak. After the dinner, an enthusiastic crowd took to the Plaza Lawn for a free outdoor showing of the film.

The Mission, the Zanetta House, the Livery Stable and the Plaza Hotel were pictured in the film, in addition to being the subjects of paintings which were used to represent the town in studio shots.

The infamous bell tower represented in Vertigo was never part of the San Juan Mission, but constructed on a stage in Hollywood. The Mission had a succession of towers, in different locations. When Hitchcock visited San Juan in the 20's there was a tower on the right side of the Chapel entrance, however it had since been removed due to decay.

California State University Associate Professor Luis Camara gave a talk on Hitchcock,  the Mystery and Magic. He explained Hitchcock's beginning in the silent film era and his insistence that it is the visual story which is most important. So much so that the entire film had already been constructed visually on storyboards before a screenplay was written. He shared that the film was based upon D'entre les morts, a book written by Boileau and Narcejac. Hitchcock changed the location from Paris to San Francisco, to the dismay of his music composer, Bernard Herrman who thought it a mistake. He thought New Orleans would be a better location.

The film was received with mixed reviews by public and critics in 1957. The Sight and Sound poll of Critics has been done every decade since 1952. In the 2012 Critics List, Vertigo replaced Citizen Kane as the Best Film Ever. Citizen Kane had been the Top vote getter for the past 50 years.  There is also a Director's List of their Top Ten Films which began to be assembled in 1992.  On the Director's List, Vertigo has appeared as Number 6 for 1992, 2002 and Number 7 in 2012.

The San Juan Bautista State Historic Park and the Plaza History Association, sponsors of the event, were pleased with the response. The tours and tickets for the dinner and lecture sold out quickly. Next year they are planning to accommodate more enthusiasts.