New hotel to include 93 rooms, a gym and indoor pool. 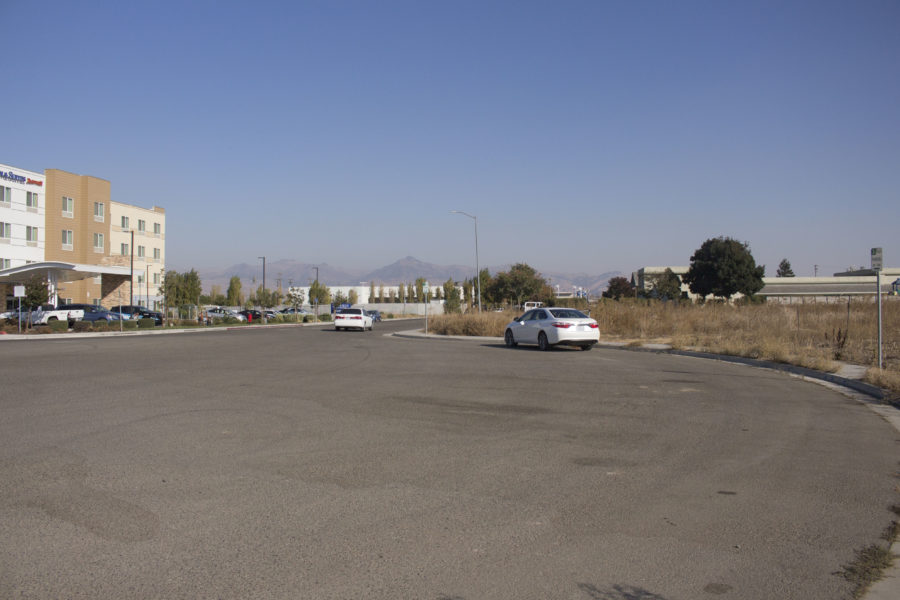 The lot across from the Fairfield Inn at 390 Gateway Drive is the proposed location of new Holiday Inn Express. Photo by Noe Magaña.
×

The Hollister Planning Commission approved a site and architectural review for a new Holiday Inn Express at its Oct. 24 meeting. The project is being put forth by Lotus Management Inc., the same company that manages the Fairfield Inn by Marriot which opened across the street at the end of 2017.

The four-story, 93-room hotel proposed at 391 Gateway Drive includes an indoor pool and a gym. The hotel will be surrounded by trees and shrubs on the northern, southern and eastern sides.

While there were no objections from commissioners on the overall project, people associated with the Hollister Child Development Center raised concerns about the locations of a garbage bin, the hotel sign, construction debris and parking. Owner Arwin Camantigue said he hoped the city could mitigate the noise and construction debris because the center is right next to the proposed hotel.

“I’m worried about during the construction because there are hundreds of students that stay there from 6 a.m. to 6 p.m.,” Camantigue said.

Irving Osawa, who owns the child development center property, said that he opposed locating the garbage bin near his property because it could attract rats and raccoons. He was also worried about illegal dumping, homeless people and “druggies.”

Lotus Management President Prakash Patel said the garbage bin is located closer to the child development center because if it was placed on the other side, it would be a challenge for  garbage trucks to access it. He added that there is water and drainage near the garbage bin in order to clean it after each pickup.

Regarding the hotel sign, Patel said its placement was dictated by requirements and that he had no personal preference as to where it’s located.

Commissioners asked the city engineer Danny Hillstock to work on a new location for the garbage bin and to work with Recology to confirm that the new location would be accessible to their trucks.

The Planning Commission also granted Lotus Management a conditional use permit for 92 parking spaces, less than the 108 required spaces to accommodate hotel guests and employees. Patel said the Fairfield Inn rarely filled its parking lot. On days when either hotel was at capacity, he said guests would be able to use the parking lot across the street.

Though the Holiday Inn Express project is working its way through the approval cycle, it could face challenges with the Hollister City Council. Councilmembers Marty Richman and Carol Lenoir have previously expressed they want to renegotiate the city’s Economic Development Subsidy before approving another hotel. The subsidy is part of the city’s Hotel Incentive Plan that gives hotels a 70% rebate of the Transient Occupancy Tax for 10 years, with a cap of $2 million.

Richman told BenitoLink the ad hoc committee, comprised of himself and Councilwoman Honor Spencer, was looking into the Transient Occupancy Tax. He said the committee presented a report and a recommendation to the City Council on Sept. 16. to increase the tax. If the city plans to increase the tax, it would have to be voter-approved on a general election ballot.