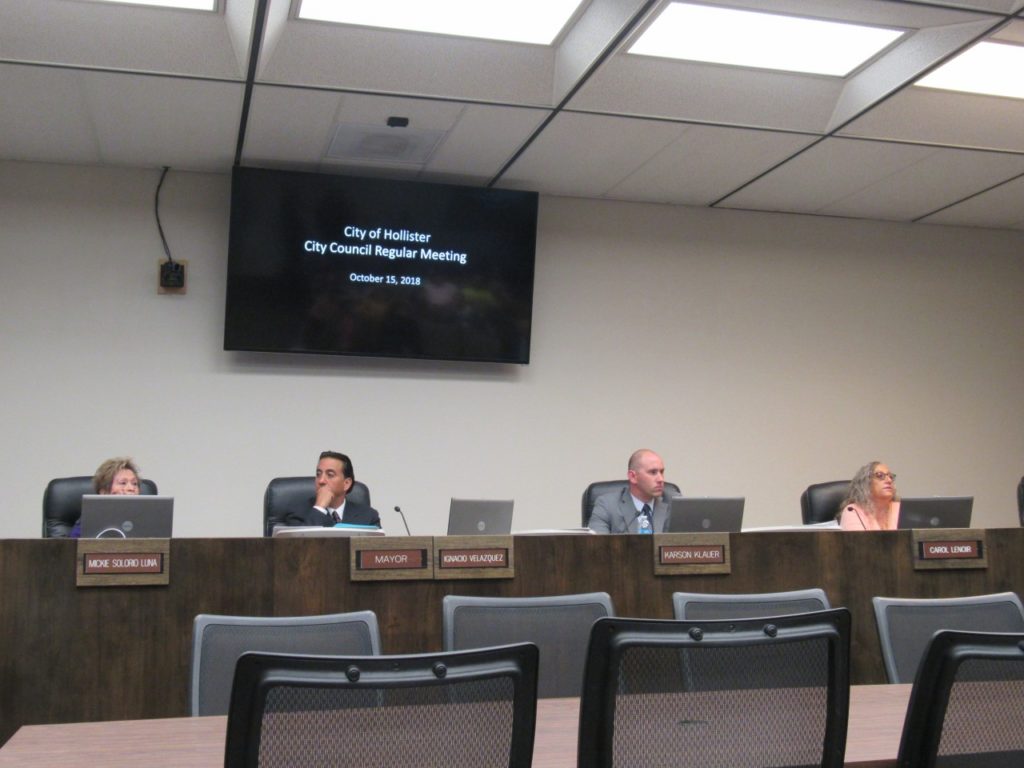 During its Oct. 15 meeting, the Hollister City Council approved a contract with Perma-Green Hydroseeding Inc. to construct McCarthy Park. The cost is not to exceed $2.77 million.

However, the council also approved an additional $501,900 to be used to complete the park in a 3-1 vote, with Mayor Ignacio Velazquez opposing it. Councilmember Jim Gillio was absent.

“I just have a very hard time adding another $500,000 to this project,” Velazquez said. “There is a lot of other work that we need to be doing and this is pulling a lot of resources.”

Hollister received a $660,000 grant from the state of California in July 2017 to revitalize the park. The outstanding cost will be funded through the Park Development account.

BFS Landscape Design of Pacific Grove designed the new iteration of McCarthy Park, and is the same company that worked on Calaveras Park and Valley View Park.

Mayoral candidate Keith Snow also voiced his concern over the cost of the park.

“$3 million, it’s a lot for this, for a park,” Snow said. He urged the council to think twice about it.

City Manager Bill Avera said the additional money would be used for shade structures over the playgrounds and the splash pad. Included is a $70,000 budget for construction management.

“We can get most of the stuff that we need to get done without it, but we just wanted to make sure that the council had an opportunity to do the entire park the way we promised and we’ve been sharing with folks up to this point,” Avera said.

Despite the cost increase, newly appointed Councilwoman Carol Lenoir voiced her approval of the project.

“What that does is bring our city from one area over here and that’s a good thing,” Lenoir said. “So I really like that component of it. Parks aren’t cheap. It’s in the park fund.”

The park design includes active and passive areas. In the active area there will be a climbing wall, handball court, swings, and splash pads. The passive area includes an open grass area and a stage area that will also serve as a skateboard park for younger children.

According to the agenda packet, improvements were not made to the park because of state water restrictions.

Councilwoman Lenoir took the Oath of Office for District 1 at the start of the meeting. She introduced herself as a 61-year-old native of Hollister who is a third-generation civil servant. She said she has worked for the county and city for 34 years, mainly in planning.

“I always strive to be honest and hard-working,” Lenoir said. “I come to meetings prepared with an open mind.”

The city also conditionally approved by a 3-1 vote, with Velazquez opposing, the subdivision improvement for Maple Park consisting of 49 single family units. Maple Park, LLC was approved to construct the homes with Velazquez also opposing.

A city utility manager position was also approved by the council. According to the agenda packet, the position is responsible for managing the operations and maintenance of the city’s water, sewer and storm drain systems. The manager will also be responsible for the administrative duties.

Finally, the city approved the Hollister Fire Department to purchase eight mobile data terminal mounts and cradlepoint routers for emergency response equipment for a total of $31,000.

According to the agenda packet, the equipment will provide maps, hydrant locations, pre-fire plans, and satellite views of incident locations.