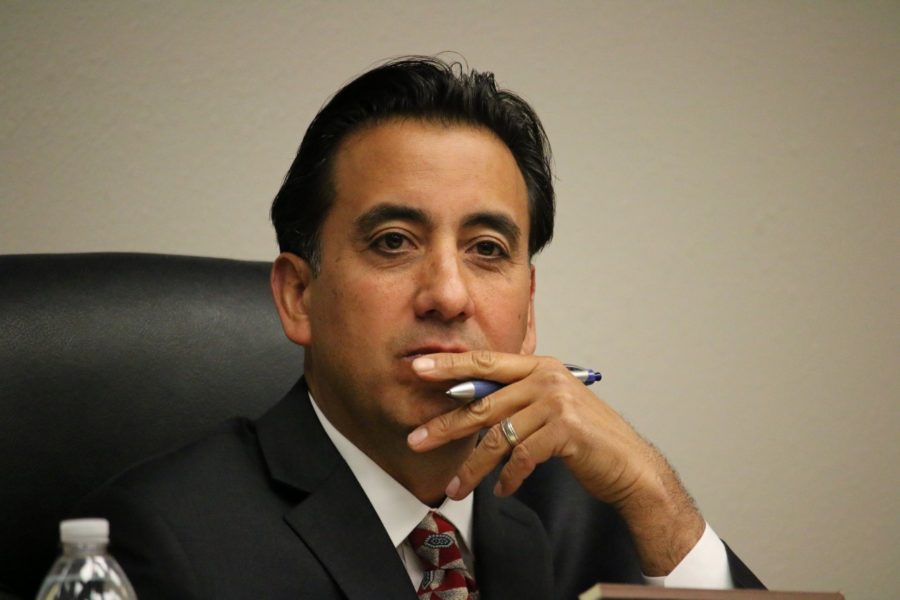 When Hollister City Attorney Brad Sullivan introduced a resolution during the April 17 council meeting concerning an 81-acre site on Fairview Road, where Award Homes plans to build hundreds of homes, he advised the council “not fight that battle,” but to honor the development agreement that has existed between the city and the developer for 18 years. It quickly became apparent, though, that he and Mayor Ignacio Velazquez were in disagreement on how to move forward.

“Your predecessors promised to assist with the establishment of a CFD (Community Facilities District) to pay for infrastructure and I’m bringing it to you because twice in the past few months when we brought CFDs before you for infrastructure you turned them down,” Sullivan said. “I’m sorry. I know how you feel, but your predecessors have promised in a development agreement that has been acted upon by the developer, so we are stuck and we’re forced to do one.”

If the developer wants to form the district it can be done under the auspices of the state instead of attempting to do it with city staff, Sullivan said. Velazquez said the developer needed to put more thought into what was being asked because he is not in favor of asking homeowners to finance the development of a project.

“I’ve said many times if they can do something like an HOA (Home Owners Association) and that community is paying for it and they understand that, I’m all for it,” Velazquez said. “I will not be involved in something that I know will come back, maybe not during my term, but in the future, attacking this city for allowing a developer to finance their project off the backs of the homeowners. This is just wrong in too many ways.”

Councilman Karson Klauer said he agreed with the mayor to some degree and pointed out that it was stated in the agreement that the financial impact would be borne solely by the developer, but that the future improvements would be the responsibility of the homeowners.

“I know the argument is to be able to provide a cheaper home because of this, but the market says that’s not true,” he said. “Anybody who is in business is going to try to get top dollar for their product. This will be disclosed a hundred times and most homeowners will still not understand what they’re doing. That’s unfortunate, but at the same time, I also believe a deal is a deal. It’s a bad deal, but it’s still a deal.”

Klauer wondered how long the CFD would exist and future homeowners would be responsible for payments associated with it. Mike Whipple, president of Development & Financial Advisory (DFA), which was hired by the city to help it establish funding for the project, said that a CFD term is typically 30 years, plus there were a number of pre-payment provisions the homeowners would be able to make if they wanted to sell their homes. He said the estimated annual infrastructure tax per home would be $1,500.

“That’s the problem I have for the whole system,” Klauer said. “That is a substantial amount per month and a lot of people don’t see this coming. The average homebuyer does not understand everything they’re signing.”

Whipple said what has been discovered in doing similar calculations with other CFDs is that the typical monthly payment with such a district is lower than those not in a CFD. Velazquez asked him why developers just don’t charge the market rate for houses and let the developer finance the project. Councilman Raymond Friend asked whether the 30-year obligation is passed on to the new owner of the house is sold by the original purchaser.

Whipple said it would be unless the seller pre-pays the tax as a condition of the sale. Friend said $1,500 a year could add up to a considerable amount of money when trying to sell the house and if a pre-payment is made there would be very little equity left to the seller. Whipple rationalized that if the sale were 20 years down the line there wouldn’t be much left to pay. The mayor countered with the argument that if the homeowner was selling only a couple years after buying the home it would be a substantial cost. Whipple said the bond structure would most likely prevent a pre-payment within the first few years after purchase.

Sullivan then asked the council to direct staff whether to proceed in-house, with Whipple and Brian Sullivan, of Award Homes, doing the work, or to go with SCIP (Statewide Community Infrastructure Program) financing as the city has done with other projects.

“The whole point of a development agreement is that it gives the developer certainty,” Sullivan argued. “In this case, the (building) moratorium that affected us affected them even more as they were unable to do anything. I cannot recommend fighting this in any way. The question is do we do it or let the state’s Statewide Community Development Authority (CSCDA) do it. They have the expertise and I don’t think the city wants to be paying the developer damages in trying to build out the development agreement ourselves.”

Whipple said that if the city would choose to let CSCDA handle the situation, then city staff would not be inundated with multiple resolutions, forming and administering the CFD, or be involved in bond issuance. He said this would minimize homeowner complaints directed at the city. He said CSCDA has a financing team set up that will form the CFD and take over the administration for the city.

Velazquez maintained that there is a need for more research and said he was not pleased with what he was hearing. Sullivan told the mayor that knowing his position he had looked for a way out.

Klauer said in his job as a Realtor, his duty is to protect homeowners, but in this instance, he was supposed to protect the citizens of Hollister and he did not think going into a lawsuit over a bad deal was the best option. Sullivan came back that the question remained whether to work in-house or use SCIP, which he recommended. Whipple said that if the city chooses to outsource the work, the developer would cover all formation costs through an advanced funding agreement.

Velazquez said he wanted the city’s legal team to examine the resolution line by line. Sullivan told him he had dealt with the development agreement through the Award Homes lawsuit against the city over mitigation fees in a tax-sharing agreement with the county for more than a year and a half. That didn’t matter to Velazquez as he said he still wanted a second legal opinion.

Award Homes’ Jim Sullivan said he understood the mayor’s position and accused him of employing a delay tactic in direct opposition of the development agreement.

“Just because you’re uncomfortable with it and want to defer it, I look at that as being directly oppositional from what the city is supposed to do,” he said. “I implore the council that I’m looking for a resolution this evening on how you’re going to go.”

Friend said he agreed with Klauer that the city’s hands were tied. He said he didn’t like it, but the city was obligated to abide by the agreement. Again, Velazquez said he wanted to hear from a second attorney. Councilwoman Mickie Luna asked if the resolution could be brought back by May 1. Velazquez said it could, but it should be seen by a specialized attorney.

“Yes, we can get another attorney,” Brad Sullivan said, “but you guys all read that language. It is about as clear in layman’s language as it can be.”

Friend asked Velazquez what he meant by a second opinion. The mayor said he was frustrated and Friend said he understood, but added that they can all agree that they don’t like it, but the city is committed. Luna added the city cannot afford any more costs that might be incurred by getting a second opinion. Sullivan tried to assure the council that if they proceeded with CSCDA, they could still get a second opinion.

“We will not be taking any action between this meeting and the next to obligate the city,” he said. “I know what the mayor’s opinion is, but I would ask that the three of you say ‘go with the SCIP program, get the second opinion, and have that report at the next meeting.”

All four councilmembers agreed to go with Sullivan’s recommendation.