Opponents say retailers and parents ought to be held responsible. 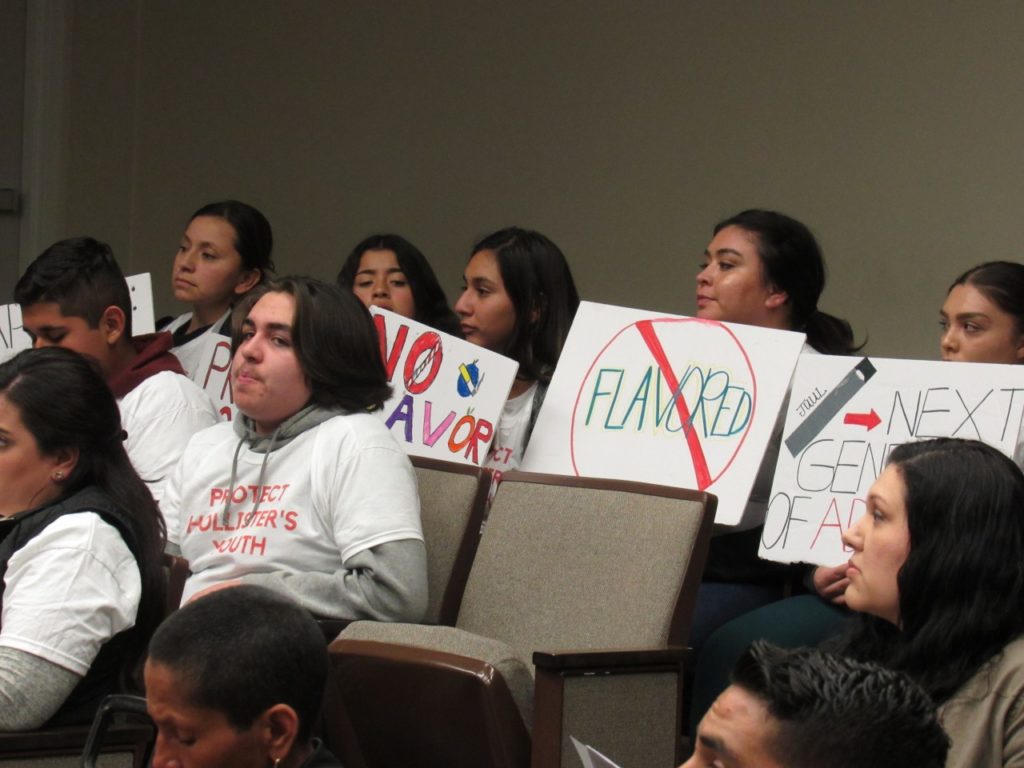 Members of the public holds signs in favor of a flavored tobacco ban during the Feb. 4 Hollister City Council meeting. Photo by Noe Magaña.
×

The Hollister City Council on Feb. 4 discussed restricting the sale of flavored tobacco solely to smoke shops in order to limit its availability to consumers under 21.

Proponents of banning flavored tobacco in city limits were among the residents who spoke before the council.

Ariana Fabian presented a Juul pod to the council and said it contained the same amount of nicotine as an entire pack of cigarettes. High school students go through one pod in two days or less, she said.

“We all know that one out of seven youth in our community currently uses tobacco, which is [a rate] higher than the state of California,” Fabian said. In 2016, California raised the legal age to purchase tobacco from 18 to 21.

“As a mother of a one-year-old, I want him to grow up in a safe environment and a healthy environment,” she said.

But not all who spoke saw the ban as something positive for the community.

Jennifer Sanchez, a mother of teen children, said the City Council should look more into enforcing retailers rather than banning the product outright.

Vaping is a healthier alternative, Sanchez said, for adults who no longer want to consume cigarettes.

“The vast majority of research clearly points out the obvious fact that cigarettes contain thousands of harmful, cancer-causing chemicals and toxins, which e-juice does not,” Sanchez said.

A ban would discourage smokers from switching to a less harmful alternative, Sanchez said. For those who already made the switch, they would be forced to buy from bootleggers or other sources putting them more at risk, she said.

Resident Bryan Keith also opposed the ban and blamed parents for wanting to be friends with their children rather than their guardians.

If taking it away from kids or citing them isn’t working, Keith said, parents and the people selling tobacco to minors need to be held responsible.

Police Chief David Westrick said people using tobacco products under the legal age are cited. The citation is then handled by the probation office, where penalties are set depending on number of offenses.

Keith said what makes kids addicted to nicotine through cigarettes is the other 4,000 chemicals contained in them that accentuate it (County Behavioral Health recently said it’s closer to 7,000, 70 of which are known to cause cancer). He ended by claiming the American Lung Association and the American Cancer Society changed their stance on vaping after initially arguing it was harmful.

Sergio Ansquita, owner of a smoke shop for four years, said a ban would kill his business, which is 50 percent vaping. As a smoke shop owner, he said he attends annual meetings regarding guidelines, which includes checking identification.

Ansquita said he does see a problem with youth vaping, but it’s a matter of regulating the shops.

“I think that you guys should enforce more checks on the actual stores that sell [tobacco products],” Ansquita said. “More checks would be more efficient.”

After hearing both sides of the issue during public comment, Vice Mayor Marty Richman said he wanted to protect the adult’s rights to the product while also making it harder for those under 21 to obtain it.

“I would like to make sure that we cut down on the places where the product can leak to underage people,” Richman said.

Richman suggested treating flavored tobacco like the cannabis industry, where only certain shops can obtain a permit to sell the product. He also said that it would make it easier to regulate the product because residents can only enter a smoke shop if they are at least 21.

“If you go to a convenience store, if you are under 21 you can step through the door,” Richman said. “You’re already there. You’re inside. And now it’s up to the person behind the counter to say ‘no you can’t buy that.’”

Mayor Ignacio Velazquez said restricting retailers was the answer and proposed the youth council help with drafting an ordinance, along with retailers, health care providers and schools.

Councilwoman Carol Lenoir was in favor of restricting the product.

“I don’t know that I can go [with] a complete ban, but I think we can step on it pretty hard,” she said.