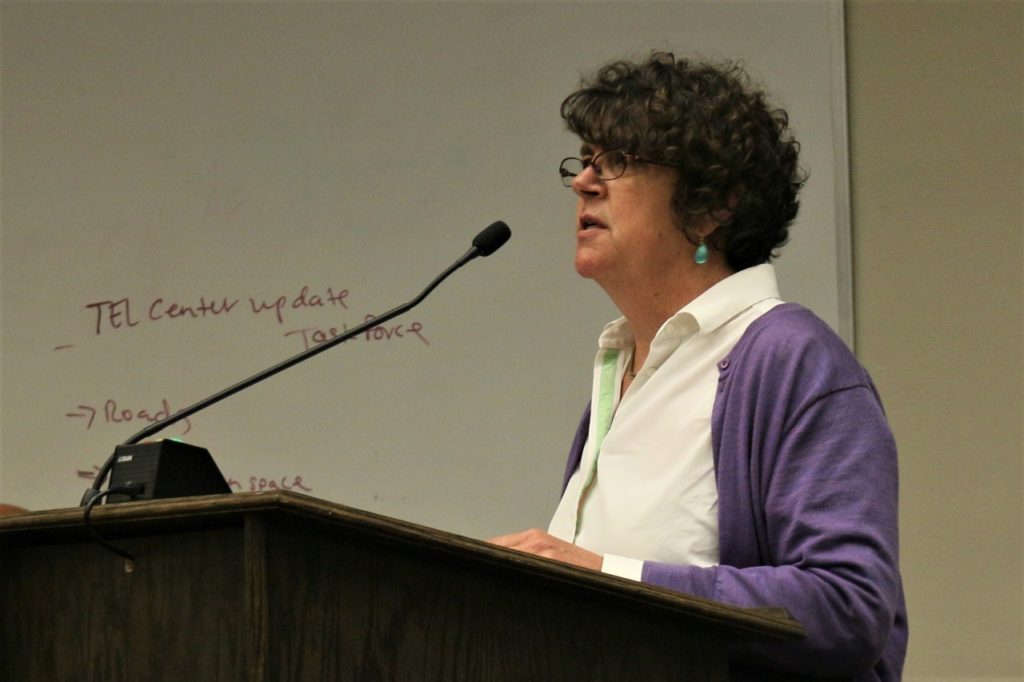 Mary Paxton said phase 1 of the project will be construction of a philanthropic center. Photos by John Chadwell. Four members of the Hollister City Council voted June 5 to pass a resolution to approve a development and disposition agreement between the city and the Del Curto Brothers Group, as well as the Community Foundation of San Benito County, concerning the grassy area downtown at San Benito and Fourth streets commonly referred to as the 400 Block. Mayor Ignacio Velazquez, a vocal opponent to the project as a private citizen and owner of The Vault, which is adjacent to the property, recused himself from the discussion and vote. He has, however, joined residents in voicing disapproval and concerns repeatedly to the community via Facebook.

The passing of the resolution set in motion a two-phased construction project. Phase 1 will be a 9,000-square-foot philanthropic center that is fully funded through a donation to the Community Foundation. Phase 2 could take longer because the Del Curto Brothers Group must secure funding and changing economic conditions, including demand for housing, could possibly affect the developer’s future plans for their portion of the property.

Before the vote, Mary Paxton, program manager of Hollister’s Development Services Department, gave a lengthy perspective of the property to explain the reasoning behind the city’s need to dispose of it, much to the dismay of many residents who have often expressed their displeasure on social media. She recounted how there were a number of businesses on the property that were heavily damaged by the 1989 Loma Prieta earthquake.

The city’s Redevelopment Agency (RDA) purchased the lot in 1994-95 with the full intention of rebuilding structures to revitalize the downtown area. It was never intended to stay a grassy area as many residents in recent years have expressed a desire for it to remain. At approximately the same time, the Briggs Building was constructed with the intended purpose of supporting whatever development took place on the adjacent 400 block that would possibly be connected by a pedestrian bridge. Over the years, a number of projects were suggested, including a theater, restaurants and apartments. Because of the sewer moratorium and the Great Recession, none came to fruition.

On Nov. 2, 2015, the city council released a request for proposal (RFP) to develop the property. On April 19, 2016, the Del Curto Brothers Group and the Community Foundation of San Benito County offered $390,000 for the property, which was appraised in 2013 for $213,000. On May 2, 2016, the council accepted the proposal and entered into an exclusive negotiation agreement with the developer and foundation. No other developers, groups, or individuals submitted RFPs.

At the time, it was stipulated that the proceeds the city would receive would be used to study and build an amphitheater downtown. Then on June 16, 2016, the agreement was executed. All of the meetings were open to the public.

“During the Great Recession, the state legislature abolished the redevelopment agencies in California and the city’s hands were tied in doing anything with the property and we weren’t in a position to do anything until about 2014, when we had to have a plan for the disposition of this property,” Paxton explained. “When the state passed the redevelopment law, they wanted agencies to dispose of properties expeditiously with an eye to maximizing profits.”

She said the city could not “leave the property empty.” As the city waited for a possible development, it allowed nonprofits to use the property at no charge as the land was identified as a potential site to revitalize downtown Hollister. Also, the California Department of Finance required the city to enter into a compensation agreement with all the taxing entities—San Benito County, Gavilan College, Hazel Hawkins Hospital, school districts, San Benito County Water District, and the County Office of Education—involved with RDA. This meant that most of the money for any sale would go to those entities because no property taxes were being paid through the years as the public continued to use it without cost.

“When the property sells, the proceeds will be distributed to all the taxing entities and the city should receive close to $43,000,” she said.

Since submitting its proposal, the Del Curto Brothers Group has modified the design of the proposed project from four interconnected buildings with open spaces in between to a single three-story structure that would house 8,000 to 11,000 square feet of retail space on the ground floor and condominiums on the other floors. Also, they changed the plans from 16 condos to between 14 and 22. Darin Del Curto later explained during public comments that the changes were being proposed for economic, earthquake and fire-suppression concerns.

Councilman Jim Gillio said he had been researching the project and ran down his findings to see if Paxton concurred with his understanding of the long history of the property. He said that as a 15-year-old at the time of the earthquake, he recalled it was not a grassy lot, but full of buildings. He said the demolition of the damaged buildings aligned, as he understood it, with the 1991 Downtown Strategy Plan. He said nearly half of the property would be devoted to the philanthropic center, which he thought would be a good use of the property as non-profits would be encouraged to use the facility.

“From 1991 until now there have been many attempts (to develop),” he said. “There’s been movie theaters, office space, a couple hotels, a performing arts center, but those did not make economic sense.”

Gillio stated that the city had not received any other RFPs, other than that from the Del Curto Brothers Group and the Community Foundation of San Benito County, and that the Briggs Building was built specifically to support whatever was built on the 400 block. He went on to say he talked to the Hollister Downtown Association and was told the organization of retailers firmly supported the proposed project.

“If this development moves forward, I really encourage it to be something we’re really proud of and not just a building for somebody to make some money on it,” he said. “I think the first rendering was a lot more appealing. I talked to people who were 100 percent for open space and when I showed them the renderings they realized there would be a philanthropic center.”

Councilwoman Mickie Luna commented that it isn’t common for people to sponsor facilities in the community, referring to the private donation to fund the philanthropic center. She asked what the timeline looked like for moving forward. Paxton told her that if they passed the resolution “the clock starts ticking for the foundation and the developer to prepare applications for architecture reviews within 45 days to the Planning Commission.” Councilman Raymond Friend wanted assurance that the resolution was aligned with the long-range property management plan both the city and state approved in 2014. Paxton said it was.

“So, the information that is coming out in social media is incorrect?” Friend said, rhetorically. “This is an obligation that we’re filling out?” Again, she said he was correct. “We have an approved tax-sharing agreement and the city does not get $390,000 and the rest goes for taxes?” When he said he thought that people who have interests in the land would receive compensation, Paxton corrected him, stating that the money would all go toward paying back-taxes to the entities that had forgone receiving property taxes over the years.

Friend also commented that if he had seen the second rendering of the single building that the Del Curto Brothers Group was proposing, instead of the four buildings in the first rendering, he would not have supported the project. He referred to the single building as a “warehouse,” and said the developer has to understand that things would most likely change when the project went to the Planning Commission.

Rebecca Medeiros Wolf, foundation vice chair, and her husband are the donors offering to fund the construction of the philanthropic center. She told the board she thought the center would be valuable to the community and that the Del Curto Brothers Group’s project would encourage people to live downtown who would go to restaurants and other retail stores.

Gordon Machado owns a downtown business and said after the earthquake the city and the Hollister Downtown Association requested a coordination between business owners to have one representative per downtown city block. He was chosen to represent the 400 block. He said 25 businesses on the block were affected and of all the projects he has seen over the 28 years since the earthquake, the one being proposed now was the most forward-thinking. He encouraged the council to approve the project despite reservations over architecture changes, which he said was the Planning Department’s responsibility, but the council and the public would also have input into the design.

Of the seven public speakers, one spoke against the project. One told the council that hundreds of members of the public want the land to remain open space with a plaza rather than just a grassy lot. Marty Richman spoke in favor of the project, but advised the council to include a “non-aggression” clause to the agreement to prevent future condo residents objecting to events held on San Benito Street. He recommended that the money the city receives should be used to put seed money into a performing arts foundation.

After public comments, Councilman Karson Klauer, acting as vice mayor, said for his entire life downtown has been mediocre at best.  He said a major concern was the use of the Briggs Building as a parking lot, which he described as under-used. He said there has been very little investment downtown since 1999, and what was done was assisted by the RDA. He addressed a public comment about all the vacant buildings that could be used rather than the 400 block.

“They’re very difficult to lease when the owners do not invest back into the buildings,” he said. “I wish more people would invest in downtown, but I can’t make people spend their money.”

Klauer explained that the major constraint for building downtown or changing the use of a building is the fact that it sits in an earthquake fault zone.

“From the beginning, this was supposed to be redevelopment and revitalization of downtown,” he said of the 400 block. “I like going to the events on the 400 block as much as anybody else, but it’s completely underutilized. Every time I drove by there was never anybody there. I find it hard to believe that people think it’s being utilized and creating revitalization downtown. I’m not convinced a plaza would do much different because we have two plazas within three blocks in front of the courthouse, which hardly ever gets used, and the Vets Hall, which probably gets a little used.”

Having people live downtown would be a good thing because people normally shop near where they live, Klauer added.