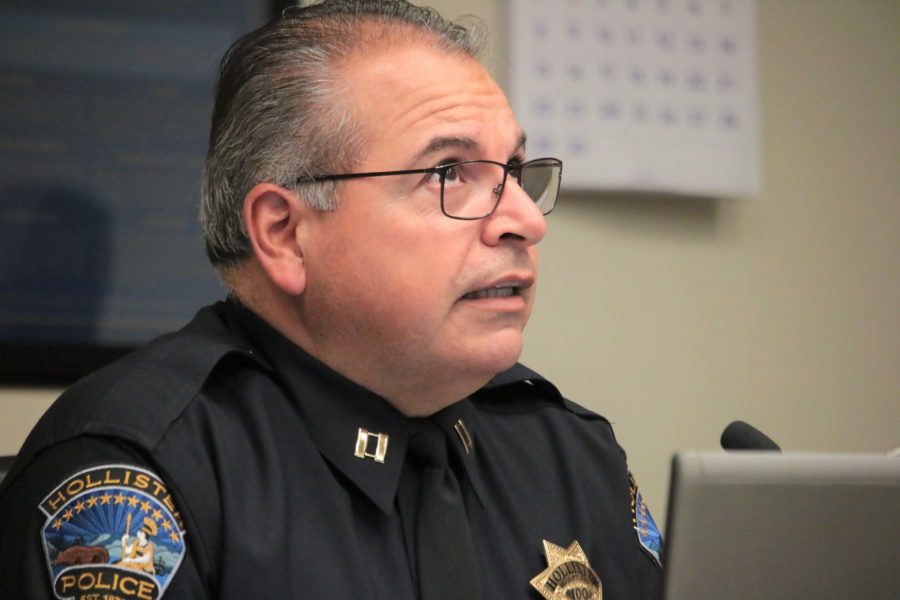 HPD Capt. Carlos Reynoso said it has been 16 years since motorcycle traffic enforcement has operated in Hollister. Photo by John Chadwell.

Councilwoman Carol Lenoir asked to have an amendment added that would ensure the officers would be used exclusively for traffic enforcement and not be diverted to other duties. Photo by John Chadwell.

Resident Kevin Stopper said he used to walk his daughter to Cerra Vista Elementary School and witnessed people on their phones running stop signs or speeding through neighborhoods. Photo by John Chadwell.
×

The Hollister City Council on Sept. 3 authorized the creation of two traffic enforcement officer positions, the purchase of two police motorcycles and associated equipment, and certified training of the officers. The initial cost is $407,000 with an annual cost of $338,000.

Before making a motion to approve the resolution, Councilwoman Carol Lenoir asked to have an amendment added that would ensure the officers would be used exclusively for traffic enforcement and not be diverted to other law enforcement duties. Richman told BenitoLink that he thought this would unnecessarily hamstring the Hollister Police Department in case of emergencies when two more officers might be needed.

Lenoir said she wanted to be assured the motorcycle officers would not be switched over to other duties because traffic control is needed.

“We worked hard on Measure E and Measure W and we heard the people,” Lenoir said. “They said they wanted a safer community. I will vote for this, but patrol is a different issue for me.”

Two properly equipped motorcycles would cost HPD about $58,000. Police Captain Carlos Reynoso told BenitoLink that the department is considering either Harley Davidson or BMW motorcycles. He said Harley Davidson offers a leasing alternative, whereas BMW does not. Also in Harley Davidson’s favor, he said, is that HPD mechanics ride their own Harleys and already know how to maintain them. Other costs include $3,100 for motorcycle training, $4,000 for radio installation and $3,900 for uniforms and equipment.

Reynoso said HPD’s traffic enforcement bureau was disbanded 16 years ago because of budget issues. In 2003, the police department lost four officer positions due to revenue shortfalls and an unsuccessful grant application, leaving traffic enforcement up to patrol officers.

“We take pride in our motor vehicles and make them very visible, and when people see our units they slow down,” Reynoso said. “So having motorcycles would facilitate the enforcement of traffic and will reduce dangerous driving habits.”

During the meeting, Richman asked Reynoso if three officers would be more appropriate. Reynoso said two was a good starting point.

“Going from no traffic officers to two is going to be extremely beneficial to the city,” Reynoso said. “Three or more would be even more beneficial, but there are other needs the department would have at this time.”

He recommended that once the city sees what two traffic enforcement units are capable of, perhaps next year the council could authorize more traffic officers.

Hollister School District Superintendent Diego Ochoa spoke during public comment as a citizen and an educator. He said that as a parent, traffic enforcement is sorely needed. As an educator, he said the two traffic officers will teach an untold number of drivers the correct way to get around town and the schools.

“Most children have a number of different people who drive them to school,” Ochoa said. “It is not always mom and dad. It is uncle, it is aunt, it is neighbor, or a child-care provider. We’re not talking about parents; we’re talking about the pinch hitter who drives kids who don’t know when you’re dropping kids off at [Marguerite Maze Middle School] you now have to go down to Hillcrest or Sunnyslope, come up Memorial and turn left. I think Hollister PD will be firm, but fair and look at the best interest of the citizens.”

Resident Kevin Stopper said he used to walk his daughter to Cerra Vista Elementary School and witnessed people on their phones running stop signs or speeding through neighborhoods.

“Motorcycles are the best thing to catch that,” Stopper said. “They can sit over at a corner incognito and I’m in full support of it.”