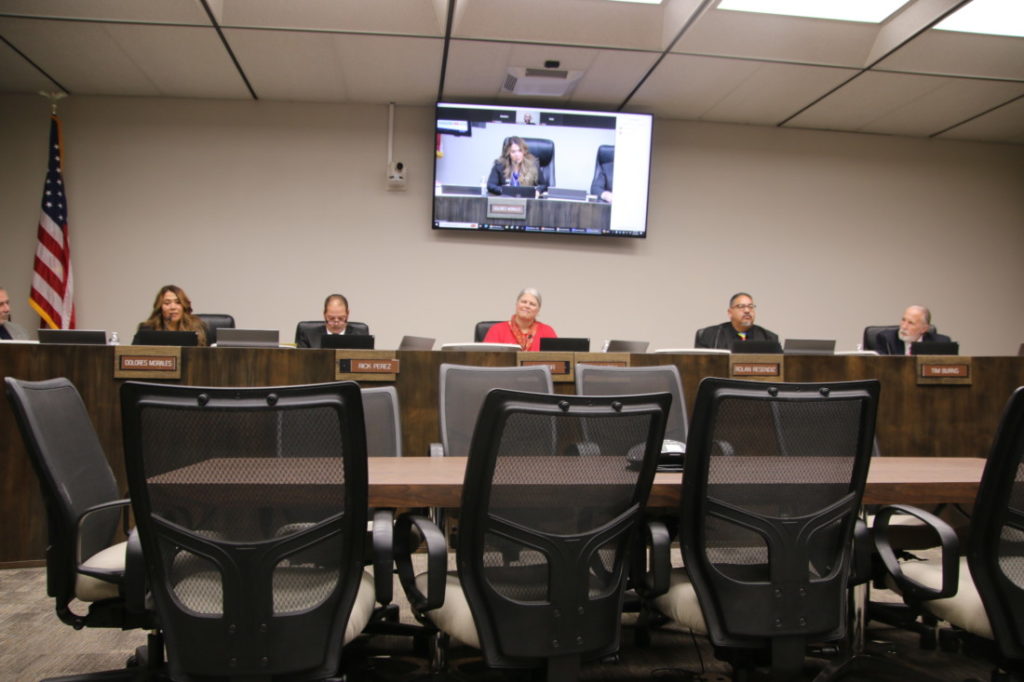 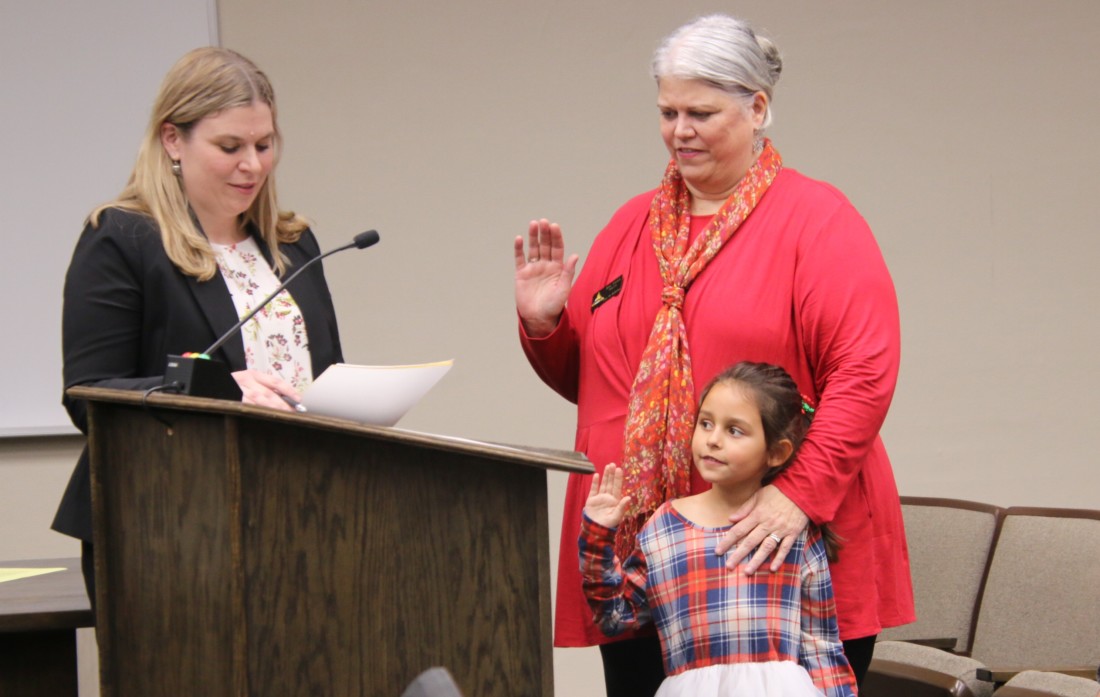 Mia Casey takes the oath of office for mayor alongside her granddaughter Jania Martinez on Dec. 13, 2022. Photo by John Chadwell.
×

After taking the oath of office as mayor of Hollister the filled-to-capacity chambers erupted in a standing ovation for Mia Casey, the first female mayor since Pauline Valdivia, who retired in 2014 after serving 16 years as a council member. Also sworn in were Councilmembers Dolores Morales and Rolan Resendiz and treasurer Gordon Machado.

Casey defeated incumbent Ignacio Velazquez, who served in the position for 10 years, with 58.33% of the vote in the Nov. 8 election. Velazquez received a plaque for his service, then called for a 15-minute recess and left the chambers.

Firefighters, whose union endorsed Casey, lined the back wall as former council members, city staff, business leaders, and the general public congratulated her, many speaking of hoped-for changes.

Hollister Firefighters Union President Josh Buzzetta said the union endorsed Casey in the hope that she would bring different views than her predecessor. He said Velazquez did not support firefighters.

“He didn’t support us at all, even just getting together to have a meeting or returning phone calls,” he said. “We reached out to him many times. We never heard from him.”

Former Councilwoman Carol Lenoir said she was looking forward to “a brighter future.”

“She’ll have a much more open mind,” she said. “I think she’ll be able to balance all sides of what I call the counter: the public side, the developer side, the council side to bring us together as a city.”

City Planning Commissioner David Huboi said Casey’s win was incredible and that he thinks she will be “a great mayor.” Leslie Austin, chair of the San Benito County Democratic Central Committee described Casey as “a remarkable woman who is deeply committed.”

“We found in our interview process she was able to answer every question at a very deep, critical thinking level,” Austin said. “She received our unanimous support.”

Casey was sworn in alongside her granddaughter, Jaynia Martinez, who echoed the oath of office with her grandmother. Casey took the mayor’s seat and her first act as the new mayor was to adjourn the meeting to cheers and cake.

Taking the oath of office for their second terms were Morales, who got 56.47% of the vote in District 3 and Resendiz, who was the top vote-getter in a four-candidate pool in District 2 with 48.23%. Morales, who was elected in 2021 to complete Honor Spencer’s term, thanked family, friends and the community. She described the day as “historic for many of us here.”

“I’m excited to have Mia as our new mayor and look forward to a collaborative effort and the progress we’re going to make,” Morales said.

Resendiz said being a Hollister councilman “has been one of the greatest honors in my life.”

He said he was particularly thankful to the LGBTQ+ community.

“I am the first openly gay elected official for the city of Hollister,” Resendiz said. “I wear that very proudly. It means a lot to me, to the youth, to members of the community, and to some of the children.”

Gordon Machado, who has served as Hollister mayor, was also sworn in as treasurer for the city. Running unopposed, he joked that “over the years being elected it was kind of nice having the biggest count I ever had in my life.”